I have picked up the baton for a blog hop passed on to me by Sustainablemum in which I am asked to answer questions which I originally thought were to be based on my creative endeavours but I now see can be much more general than that.  I am however going to stick with my original understanding and talk about my creativity - if any! 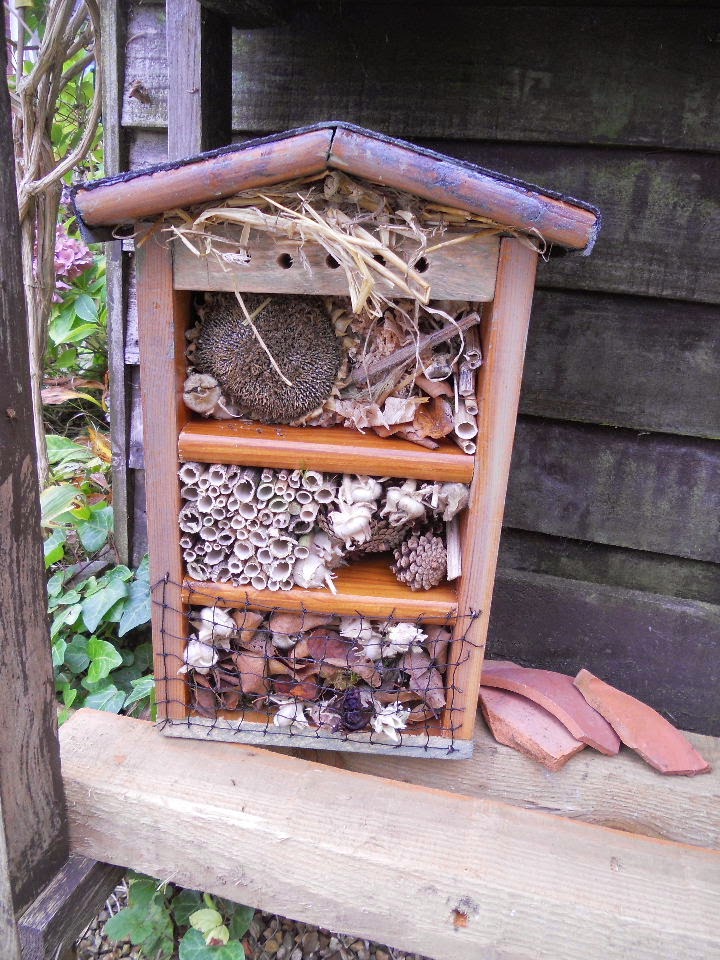 What am I working on?

I usually have several things on the go at any one time and am currently in the process of making a bag - yes the same one I talked about here still not finished, I am making a start on a shawl which I discovered the pattern for on the web, I have been engaged on making the above bug house - I desiged it and Mr M did the carpentry and then I provided the bits and filled the spaces.  I don't know how much of this could be called creative - the bag maybe, the shawl not really as I am following a pattern and the bug house is not all  my own work though I am hoping that the bugs will take up residence whoever made it!  It has had to be altered slightly since the photo was taken the badgers got at it the first night and tipped it over possibly searching for the sunflower seeds in the top left corner (which a friend on seeing the photo thought was a hedgehog so maybe the badgers did too!) and half the stuff fell out of the shelves so now there is netting over all the front and the sunflower seeds went on the bird table and the gap was filled with more shavings and pine cones and we have had no further bother!

How does my work differ from others in its genre?

Anything I make is usually made for a purpose and not just for decoration.  If I have no use for something either for  myself or as a gift then I don't make it.  My ideas are usually of a "make do and mend" or" necessity being the mother of invention" kind and I try not to purchase anything to make them but to use what I already have to hand.  The crazy patchwork bag is a case in point using up tiny pieces of the stash I seem to have accumulated over the years, the shawl is being crocheted from some yarn I bought to make a bolero but never finished and the bug house was all made from scraps we had to hand apart from the wood shavings which a friend gave me!

Why do I create what I do?

Possibly because I feel the need to make something, anything at times when I want to escape into my own world for a while.  The things I create always serve some purpose often as small gifts or as items that have a proper purpose like a quilt or mittens for warmth, or indeed a bug house to provide save winter accommodation for the bugs (hopefully the badgers won't try again!)


How does my creative process work?


My ideas are usually inspired by other people - for example I might see something I like and want to try something similar but different for myself,  When I did a City and Guilds Creative Textile course many years ago we all said how important the mutual inspiration was to us - how we'd share our ideas and often from that would be born another idea one or other of us would want to try - I find the same sort of communal inspiration in reading blogs whose writers make so many lovely things.  Other things which trigger ideas might be things I notice such as the twisted bark of plants or chimney pots - I ask myself how could I incorporate that in some form of textile work.  Or perhaps it will be the materials themselves which suggest something be they yarns or fabrics or even perhaps natural things like long thin leaves which could be used to make a basket (I remember as a child plaiting reeds and making tiny basketys from the plaits or maybe  finger weaving binder twine into something).  The world's my oyster really and filled with more sources of inspiration than I could ever use. And sometimes the creating of one thing leads to another idea too which is probably why I often don't finish one thing before embarking on another!

One other thing I haven't mentioned is blogging itself - I never really intended to become a blogger but it might be said to answer the same need in me to be creative and I have discovered another hobby in photography and writing.

I am supposed to pass on the baton to a couple of other bloggers so I am suggesting:

But no presssure there and of course the blog hop is open to anyone else who fancies joining in.
.