My diary during August was pretty empty apart from an occasional meeting in town for a coffee with a friend but once September arrived things seem to have gone mad.  I need to learn to pace myself and to take a page out of Monty Don's book and go to Norway now and again - I read somewhere that when he was feeling overwhelmed one time he told everyone that he was going to Norway for a week and then just holed up at home doing the things he wanted to do at his own pace and without any pressures - I don't need whole weeks off but must allow a day or two at home to catch up with things each week.

None of the things in the diary were particularly onerous and some have been really enjoyable including days out with friends, having a friend to stay, having a visit from the Wanderer who we hadn't seen since May along with appointments with the opthalmologist, optician and hairdresser and a couple of days further afield.  It's been a while since I took you on a jolly with me isn't it so perhaps you'd like to join me now? 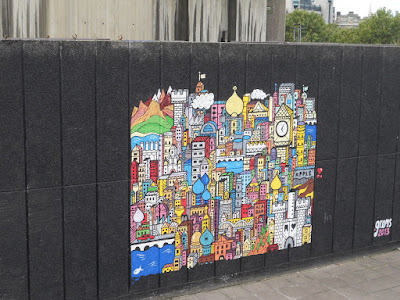 I went up to London just over a week ago to meet up with friends and we went to the Courtauld Gallery  I have got out of the habit of taking photos but this one was seen as we walked across Waterloo bridge from the station.  I hadn't know that this bridge is sometimes nicknamed The Ladies Bridge because it was largely built by women duringWorld War II.  See this link  for more on the story about how in Britain women's invaluable role in the war efforts were largely forgotten. 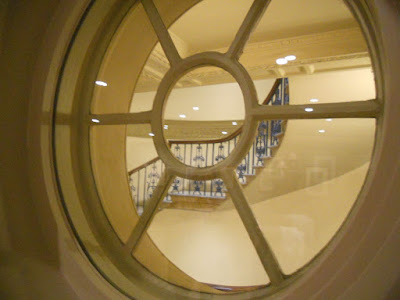 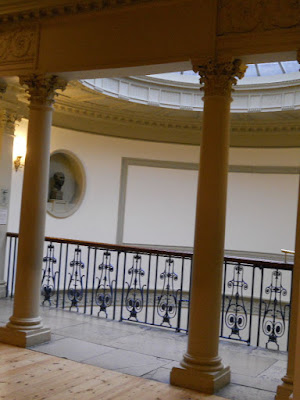 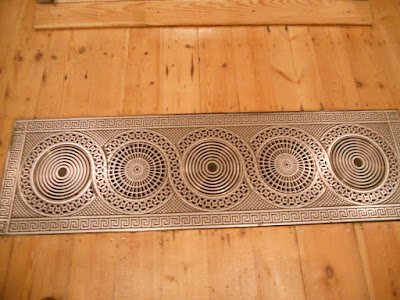 I am such a philistine when it comes to paintings - I am not at all knowledgeable about fine art apart from knowing what I like and I am usually more interested in the architecture (is that what I mean or is there another word for the internal decoration of a building?) of the galleries as you can see.  The photo above was of a metal grid in the floor for heating purposes perhaps which really took my attention - isn't it beautiful?  We had a very pleasant day together and spent plenty of time in the cafe over lunch and later tea with lots of gossip taking place before making our way back to the station for our respective trains home. 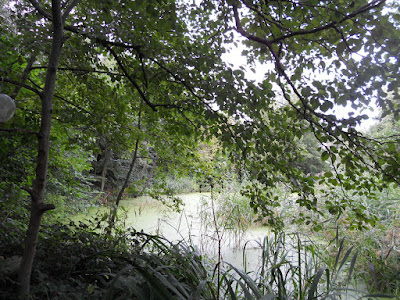 Then yesterday Mr M and I met up with a couple of friends for a day out - I wonder if you can guess where we went from these pictures? 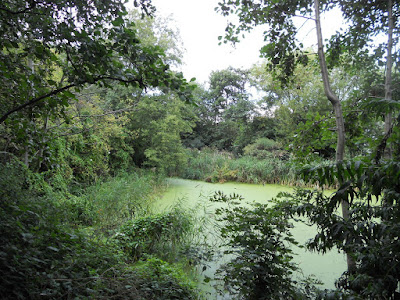 Who would have thought that the above photos were taken just a few steps away from Kings Cross station in London?

We had taken a bus from Waterloo to Kings Cross where we wanted to see the Skip Garden and the Natural Swimming Pond before having lunch and then planned to visit the London Canal Museum.
Do check out the links as they show both places in sunshine whereas my photos were taken on a rather grey day. 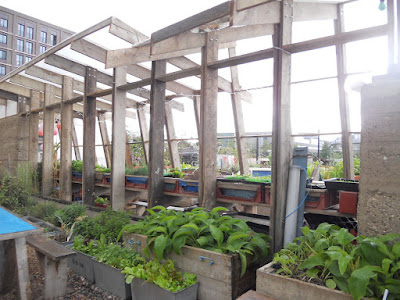 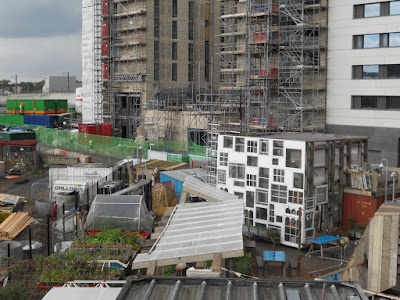 I think the garden might have been better seen earlier in the year in the sunshine but yesterday was grey and with occasional showers and the skips had obviously been well harvested.  I love the idea of making use of waste space with a garden which can be moved though and I thought the square block  building you can see which was made of assorted windows presumably salvaged from somewhere was a lovely idea. 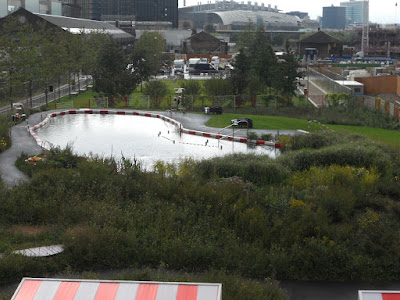 .As you can see there were no swimmers in the pool either which being unheated didn't seem very inviting on a chilly damp day but which must have been lovely on a warm summer's day and how odd to be swimming in amongst the plants in the open air whilst seeing the trains, perhaps even Eurostar, passing nearby. 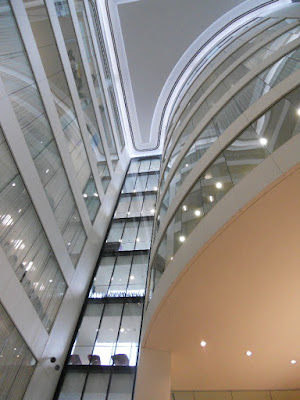 We had lunch at Kings Place an interesting mix of visual art, music and offices and this photo was taken looking up from our table in the cafe.  Once again it is the patterns in the structure of the building which caught my eye rather than any of the paintings which were on show in the basement area passed en route to the toilets! 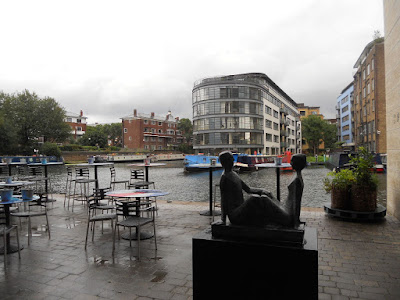 Looking out from our table - raining during lunch but at least we were inside at the time! 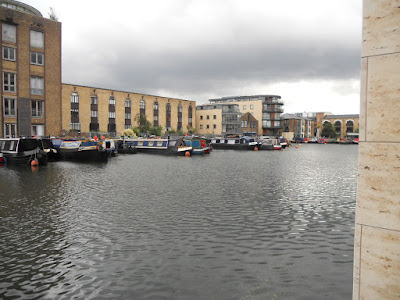 Replete and ready we made our way to the Canal Museum a small but interesting museum filled with fascinating details about canal and life on the canals and so on.  This is Battlebridge Basin
an area where boats could turn and unload their cargoes without blocking the canal itself back when much cargo was carried on water and now an area where people live on board converted narrow boats. 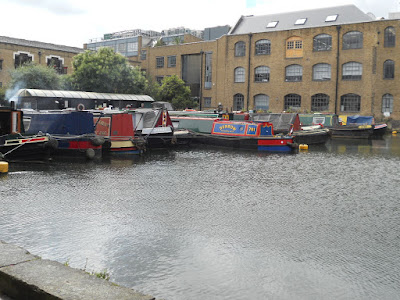 Having had our fill of canals and their history we went back to Kings Place for tea and cake and a sit down and mlore chat then as we had time before we needed to get back to the station to go home we wended our way to a wildlife park we had found, mentioned on a leaftet, called Camley Street Natural Park 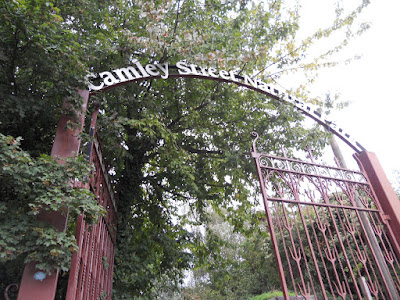 Just inside these gates we found a lovelygreen  oasis of calm sandwiched between the busy railway lines into St Pancras Internation station where the Eurostar trains arrive and leave from and the canal.  Check out the link for a photo showing an aerial view and you will see what I mean. 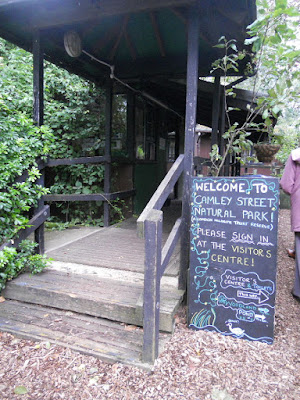 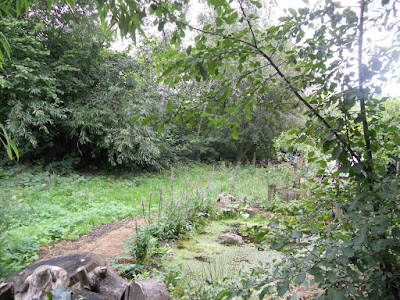 The 2 acre park was created from an old coal yard in 1984 but it looks and feels as if it has been there for ever - a real breath of fresh air, peace and quiet in the middle of the regeneration project which is changing the area from an industrial quarter into a new city quarter with all the building work, cranes, noise and so on that that entails not to mention the traffic and trains. 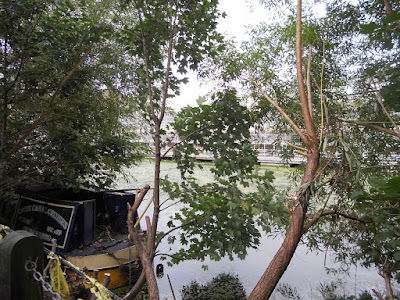 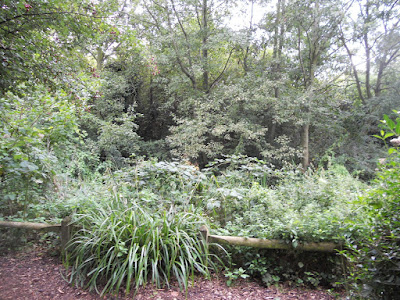 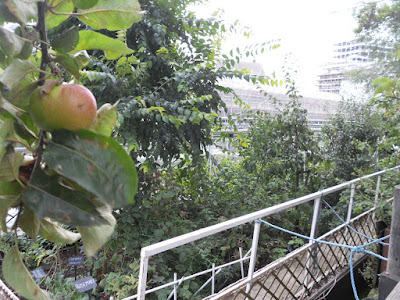 This photo shows a floating forest garden and the apple tree is in a tub alongside on land whilst the gardeen is on a barge on the canal. 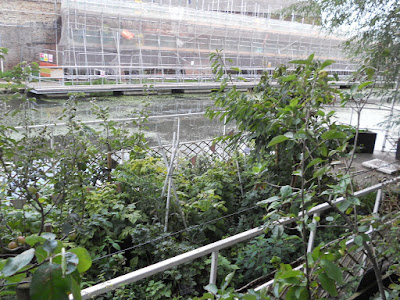 The barge in which the forest grows was a 1940s canal dredger which was destined for the scrapheap in the 1990s but which was rescued and turned into this lovely garden adding more greenery and spaces for wildlife here on the canal. Do click on this photo to read all about the floating garden. 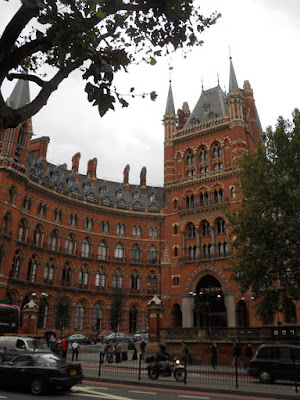 Now it was time to make our way back to St Pancras where we would get a bus back to Waterloo and home.  Another lovely day out - how I enjoyhaving my bus pass and Senior rail card!
Posted by Marigold Jam at 16:53