First do your research!

We had a day out yesterday and knowing how you enjoy a day out with me I wondered if you'd like to see where we went?

We took the train to Exeter and from there we went to Exmouth, somewhere we had never visited before.  The journey to Exeter took us through lovely countryside with green fields, lambs gamboling in the sunshine, trees all bursting into leaf in that quintessential springtime green.  The sky was blue with cotton wool clouds and as we passed from Somerset into Devon the earth changed to a lovely rich red.  The banks were crowded with primroses and everything was perfect.  Arriving in Exeter we found the bus station and took a bus - bus passes at the ready - to Exmouth. 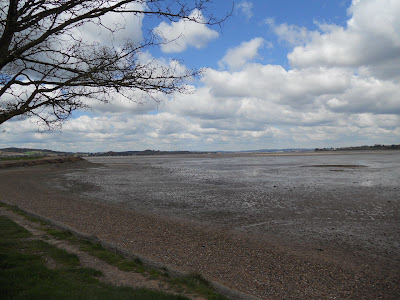 Exmouth is probably a lovely spot normally but we had not checked the tide timetables and when we were there the tide was well and truly out.  The wide estuary was a mudflat which is no doubt really interesting if you are a bird watcher but beautiful it was not! 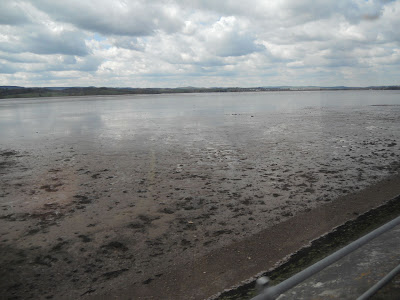 Added to which the wind was bitingly cold again so we didn't stay long enough to wander round to the promenade and after a pub lunch we took the train back into Exeter - the route runs right alongside the estuary as you can see here and again might have been lovely had there been more water in place of the mud! 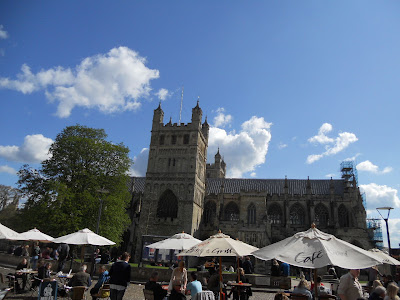 Back in Exeter we found people sitting out at cafe tables in the Cathedral Close (out of the wind) and enjoying the sunshine! 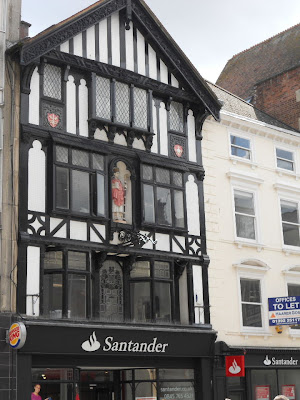 We had a wander round Exeter - an interesting city surrounded by beautiful Devonshire countryside.  Severely damaged during the bombing raids of World War II it still has some beautiful old buildings left amongst the more modern infils with all the trappings of modern day commerce. 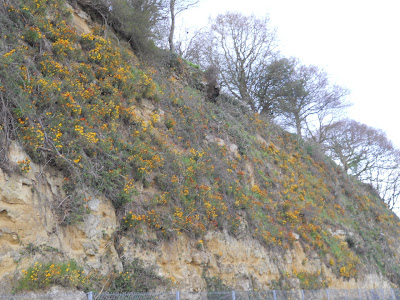 After a cup of tea in John Lewis we wended our way back to the station for the train home.  It had been slightly disappointing day out but nevertheless we had enjoyed our outing.  As I am currently planning another of my Bus Pass, Boots and Backpack trips this was a bit of a rekkie and I will know now to do my research on tides before deciding on my itinerary!!!  The above photo was taken in the car park at the station on our return - it had obviously rained whilst we were away and the smell of these wallflowers which clothe the cliff behind the car park was fabulous.
Posted by Marigold Jam at 15:07 13 comments: