One year ends and another begins


It's the last day of 2016 and thoughts turn to what has happened during the year.  Others have written far more eloquently than I could about the events on the world stage so I won't say more on that subject but for me on a personal level this year has been about the eyes!

It's been a roller coaster year as I had an eye operation at Easter and then a second one at the beginning of October and have gone through the gamut of emotions after each ranging from fear and anxiety, frustration and despair to joy and immense gratitude.  There were times when I was on top of the world as my sight was so much improved and moments when I was in the Slough of Despond when I lost my faith in eventual recovery and even, dare I say it, in the wonderful surgeon I have been seeing.   I developed blepharitis and later an allergy to the drops which left me with a horrid red, scaly rash round the eye and then when I thought I was out of the woods with the first eye and just about to have the second one done, a broken blood vessel which left me with a bloodshot area on the newly pristine eye surface which I worried about.  I also hadn't realised that the pterygia could be cancerous which they weren't but of course I worried about that too!  However all is well and I am gradually reducing the eyedrops and am to see the surgeon again in February when I should have finished them altogether.  I am hopeful that this will be the end of the story.

I have learned a lot over the past year and had plenty of time for reflection not being able to see to read, do any crafting or even watch television some of the time and I realised that there is more to sight than being able to see - that is just the mechanics of it - how and what I see has changed the way I think and the way I see things is about who I am.  I have been given the precious gift of clear sight again and an unexpected extra gift - that of a new lease of life!  Now that I can see better I feel different - younger at heart and once again the capable person I used to be and for that I will be eternally grateful.  Every time I thread a needle to do some stiutching I marvel at the skill of the surgeon - I bet he didn't lick the thread to get it through the eye of the needle (at least I hope not!) nor say "That'll do" if the stitching wasn't quite right!!

Carpe Diem for I intend to use whatever life I have left in the best way and not waste it on complaining, or procrastinating as I have been doing. 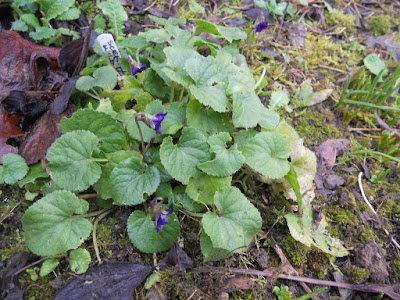 Accentuate the positive for I have been guilty of negativity and complaining instead of seeing the wonder of life which is now there for me to see if only I take notice.

Now that I can see to read I have been making up for lost time getting through several books a week and have just finished one I can recommend to you:  The Outrun by Amy Liptrot which is a life affirming read about the power of Nature to heal even though the author didn't seek nor expect Nature to heal her alcohol addiction. 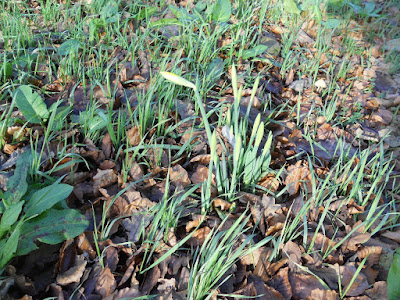 I seem to have forgotten the very rudiments of writing a blog post and can't seem to string together a couple of words like I used to but this comes to wish you all a peaceful and Happy Christmas.  The photo above was taken this afternoon when I went for a walk in what was left of the sunshine.  Last year the daffodils were in full bloom at the beginning of December but this year they are seeming to be a little more circumspect and this is as far as they have got but they still speak to me of hope and after all what is Christmas about but Hope?

I am listening to Classic Fm as I write and it is The Full Works Concert a recording of the Great Ormond Street Carol Service 2016 held in the St Pauls Church Knightsbridge on Tuesday 13 Decenber and I thought that since I can't seem to get my own words out properly I'd leave you with a couple of poems I have just heard along with the carols which might amuse you:

Firstly Joseph and the Shepherds
and secondly Politically Corect Christmas
To read these two poems just click on the links.

And if you are able to listen to Classic Fm on Demand within the next 7 days I can recommend this carol service as a real tonic to get you in the mood for the festive season.

And let's not forget whilst we are smiling at the above poems and preparing for our own festive holiday that there are those who have nothing to smile about and perhaps send up our prayers for those who are sick, those in war torn areas, those who were in Berlin when the lorry was driven into the Christmas market and ..... so many for whom Christmas is not a merry festive time at all and as this verse of the carol  It came upon the midnight clear  says:
"And man, at war with man, hears not
The love song which they bring:
O hush the noise, ye men of strife,
And hear the angels sing."