First of all my apologies for sloping off at the end of last year without saying Goodbye and thank you for having me.  I didn't mean to be so impolite especially as I have made some lovely friends and received so many gifts and giveaways during my time spent blogging with you all.  However I felt I had nothing new to say and my muse had definitely left me and so it was that I just stopped blogging.   I did intend to pop in at Easter to wish you all a Happy Easter and to give you my apologies then but Easter passed in a blur - literally!

I had an eye operation on the Thursday before Easter for a condition commonly called Surfer's Eye.   Now anyone who knows me will know that anyone less like a surfer would be hard to find - I hate water sports of any kind and don't like getting my face wet am not even keen on swimming and at my age I hardly fit the bill!  However just as one doesn't have to be a tennis player to suffer from tennis elbow or a housemaid to get housemaid's knee one doesn't have to be a surfer to get pterygia which is the proper name fro what I had/have.

I was terrified when I walked into the theatre and settled myself as instructed on the table but it all went smoothly and wasn't anything like as awful as I feared although I optimistically imagined that it having been done under a local anaesthetic I would feel fine albeit with a rather painful eye.  Not so and I was surprised at how wiped out I was afterwards.  I was going for a lie down after lunch each day and sleeping for nearly an hour and then going to bed early and sleeping till the morning even though I wasn't actually doing anything much.  I even lost 4 or 5 pounds in the first couple of weeks as everything tasted like cardboard, not that I minded about that too much but I wouldn't recommend it as a weight loss programme!

I felt as if my eye was stuffed with barbed wire and a thick white fog meant that I had no real sight in the eye for a couple of days.  I couldn't read, sew or watch TV.  I had an audio book from the library but it's nothing like reading, and I knitted a couple of wash cloths - not sure they will ever get used - but that was as far as it went.  I had been taking a daily walk in the woods that adjoin us here ever since January, which I had found a peaceful interlude of me-time or a walking meditation when I forgot any problems and worries for a while and was truly in the moment and I really missed  being able to do that too - fear of tripping or getting poked in the eye with a twig what with not being too steady on my feet without the usual binocular vision.  Luckily this only lasted a few days and before long my vision cleared and one evening I stood on the back doorstep and noticed the evening sky where the sun had gone down lit orange, apricot, lemon, duck egg blue till it eventually blended into indigo as night fell, with the trees silhouetted black against it and realised that I could see them all in sharp focus with the affected eye.  What a miracle!  The only down side was that I could now see that I had many more grey hairs and wrinkles than I had thought and that some serious housework would be needed to shift the cobwebs and splash marks I could now see everywhere! But that was a very small price to pay!

I have been back for my post operative appointment and had the stitches out  "Don't move and don't blink" the consultant said as he peeled the lid from a sterile pack to reveal a fearsome looking instrument and approached my eye with the sharp instrument in his hand!!  He has put a contact lens in to act as a "bandage" over the graft to protect it especially as there are now no stitches holding it all in place and I have to go back on Friday 13 May (considered a lucky day in France!) to see him again but it seems it is all progressing as expected.  Though he is making noises about the other eye now! 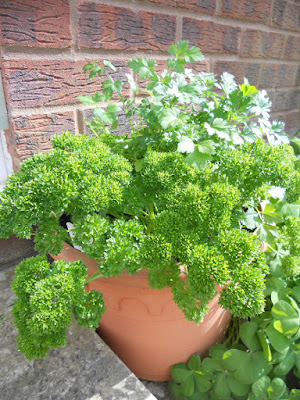 Now here is where the parsley comes in for I have realised just how wonderful a gift I have been given and I am seeing things as if for the first time in such detail that when I opened my back door and noticed the pot of parsley growing outside I was struck by the way the leaves were curled and formed and the play of light and shade on them.  Not only have I got my eyesight back and can see to thread a needle at the first attempt and to read a few more lines on the sight test chart but I have also rediscovered a sense of wonderment like a child seeing things for the first time and examining the details or am I now in my second childhood perhaps?

I have no words to express the gratitude I feel and every day I thank God, the surgeon and his team and even the good old NHS for giving me a new lease of life, one where I no longer have to resign myself to taking ages to thread a needle (so much so that I often gave up on doing any stitching), to being unable to read the small print without my mother's old magnifying glass or to seeing the distant the distant hills as just a grey blur on the horizon (there are fields and trees on them there hills I see now!) and to thinking I am doomed to listening to audio books and knitting dishcloths instead of doing my beloved crazy patchwork.  It's brilliant!

I am not planning a Bus Pass, Boots and Backpack break as in previous years but have decided to do BBB days out instead and come home each evening especially as I don't know how many more appointments I will have at the hospital nor when they might be or even if I might be having the other eye done sooner rather than later.  I have the timetables out and a notebook ready.

I have no plans to return to blogging regularly but if/when I do my Bus Pass Boots and Backpack Days Out I might pop back to tell you about the places I visit or if I have anything of interest to tell you about other things maybe I will drop by but otherwise I will be too busy going for walks and doing my stitchery and so on now that I can see what I am doing properly! Thank you to all my followers who have been with me on the journey it's been so good knowing you.
Posted by Marigold Jam at 18:12 14 comments: