Away from the consumer scrum! 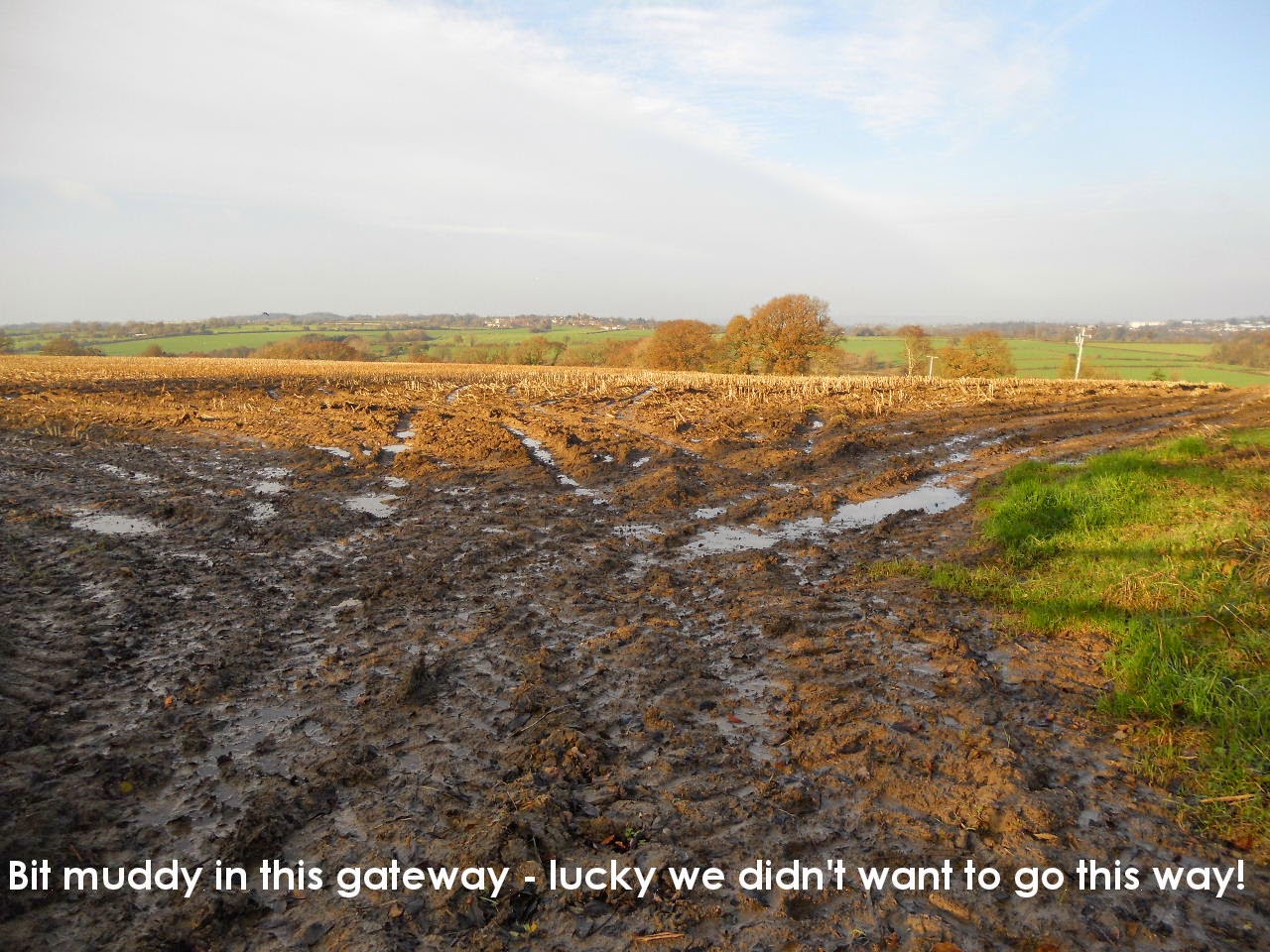 The last day of November and what a beautiful day it was.  We had an early lunch and then went for a short walk nearby. 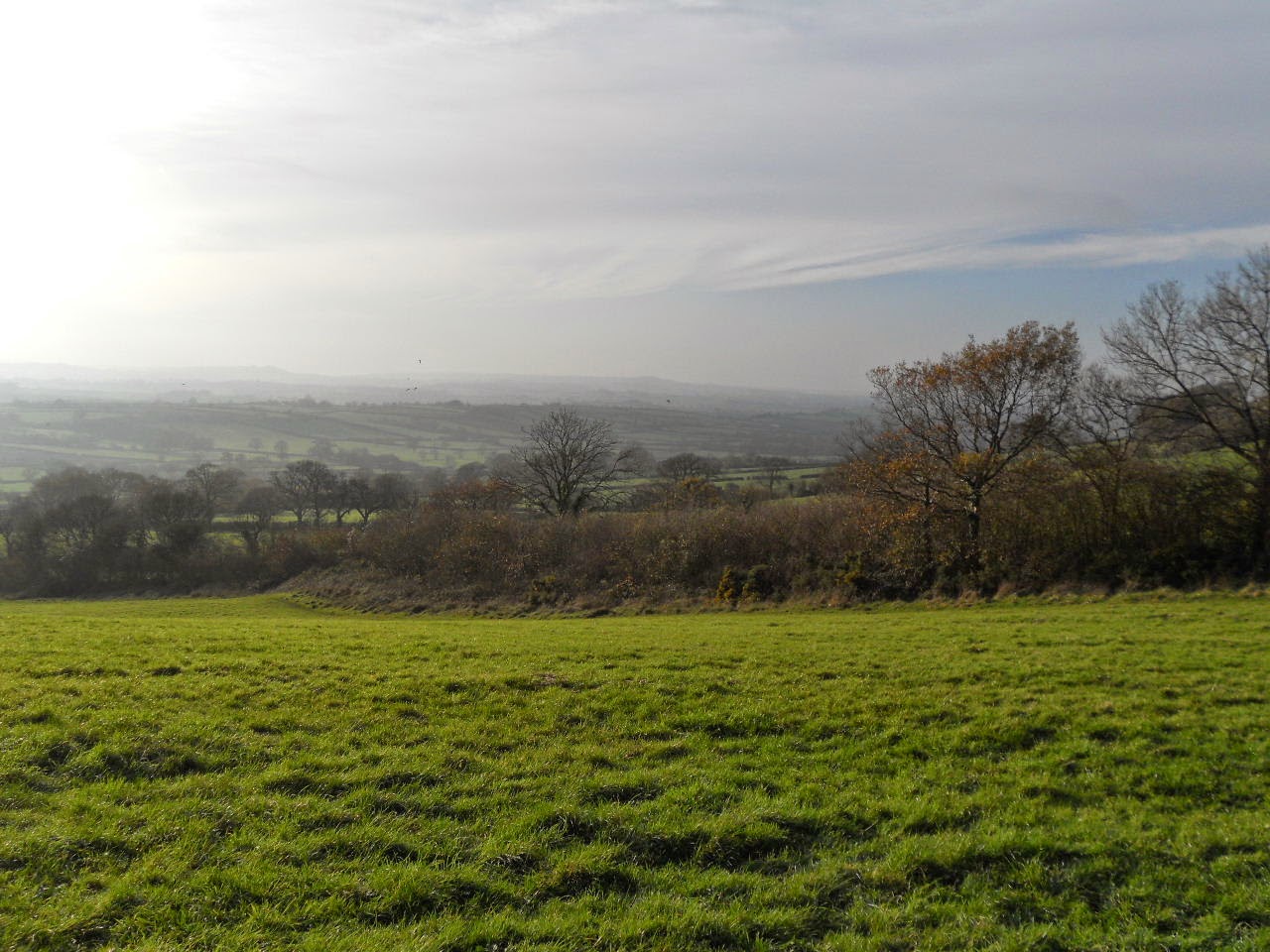 This is one of my favourite places and I always feel at peace up here on the Ridge with distant views in all directions. 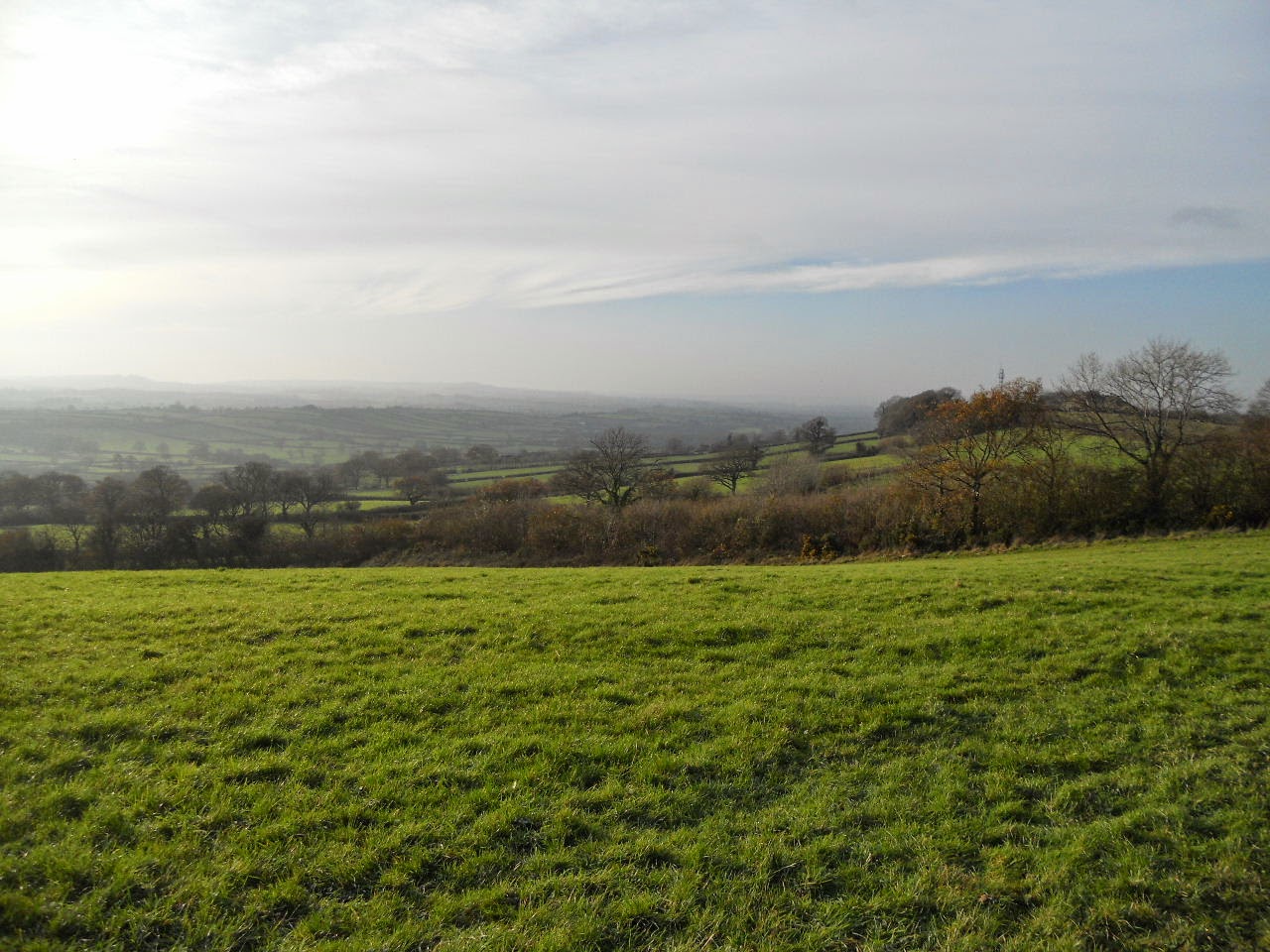 It was so quiet nothing to be heard but the birdsong - bliss!  No traffic, no ringing of tills, no pushing and shoving, not another soul to be seen! 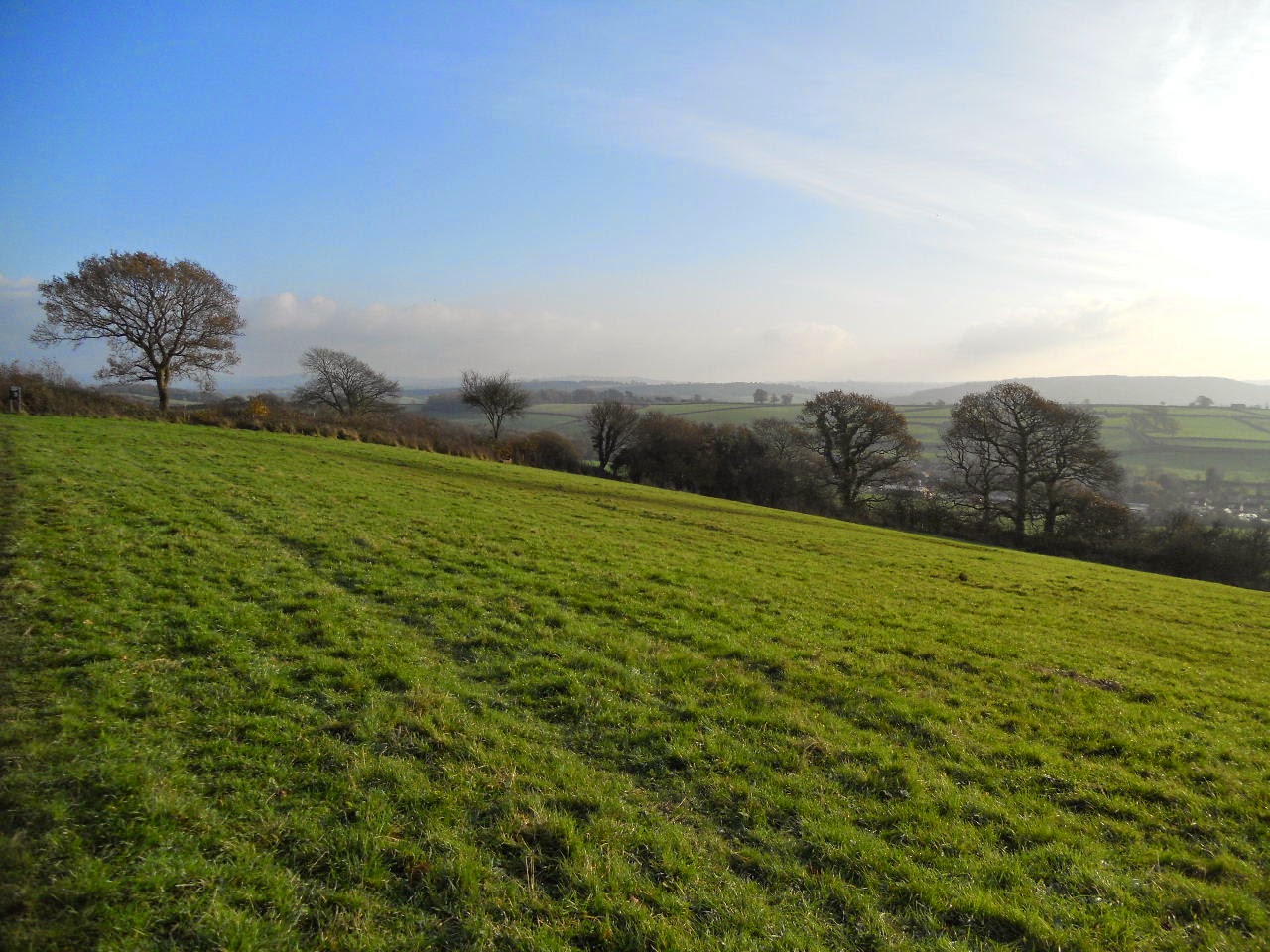 I love the inky tracery of the trees against the skyline at this time of year although it is strange that not all the leaves have yet fallen from some of the trees. 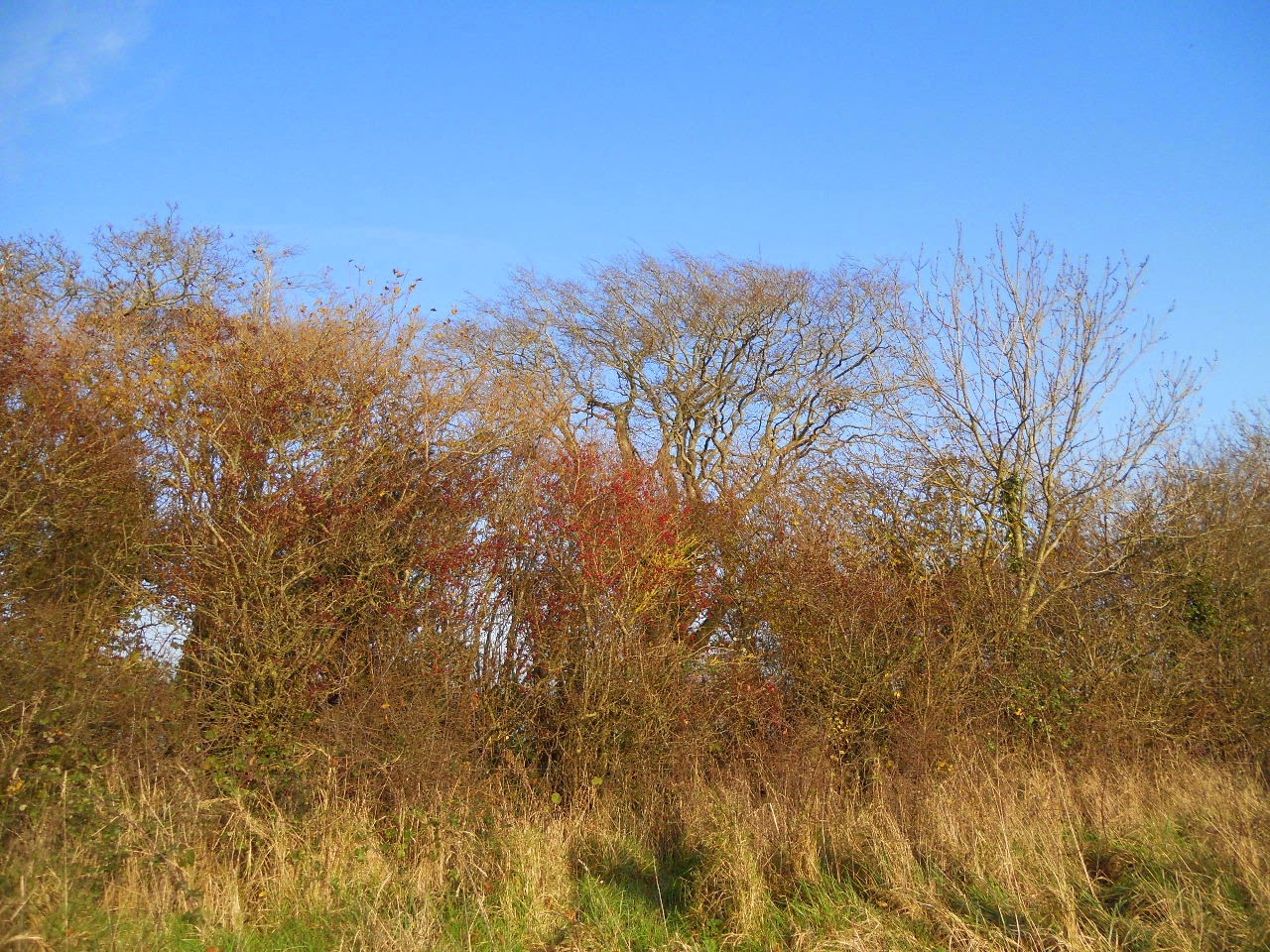 Just look at that sky - isn't it fabulous? 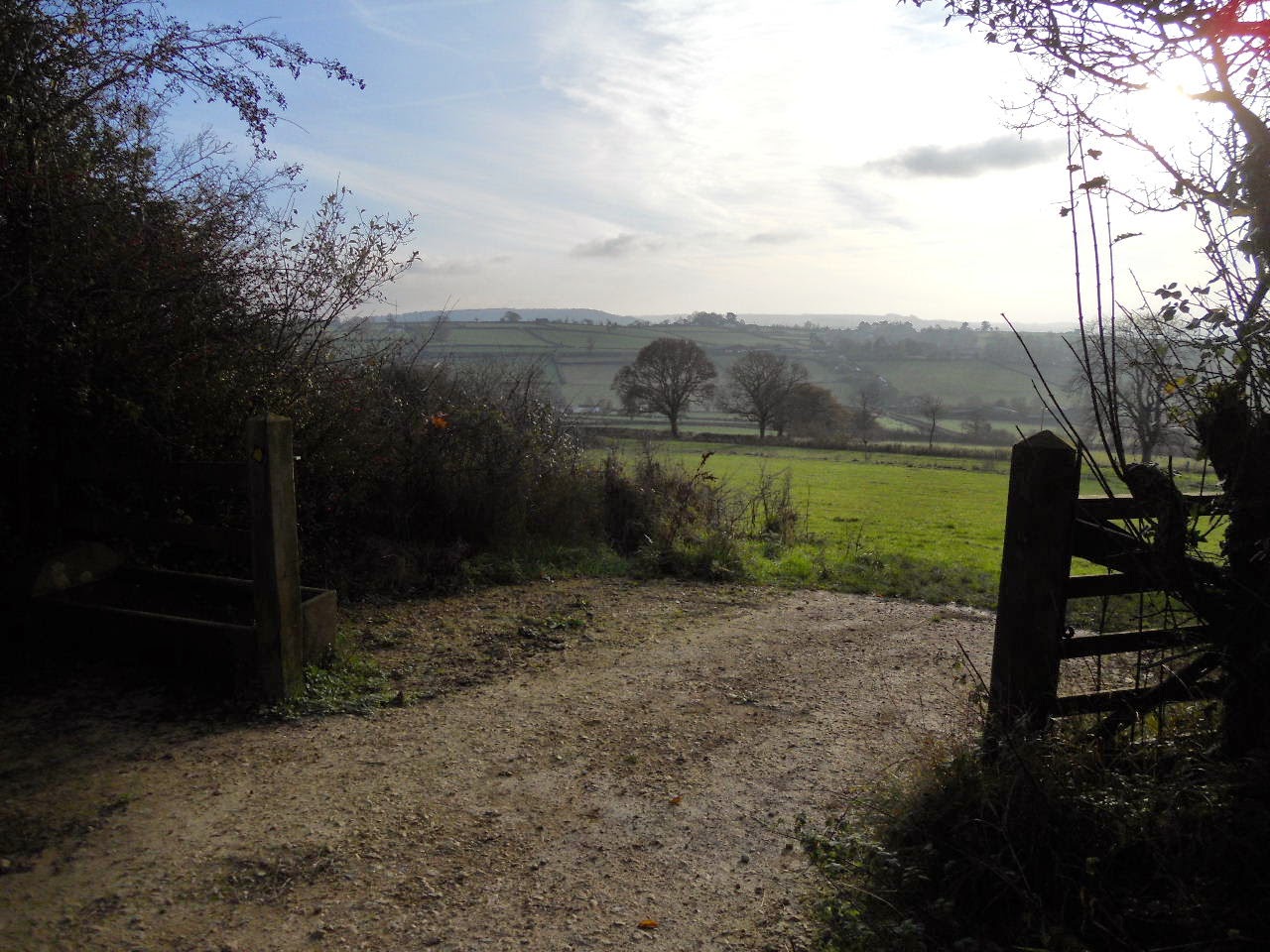 There's something about gateways with a view beyond isn't there?  They draw me in and I feel I want to walk further, maybe to that horizon?  But not today as it would be dark and cold long before I got there! 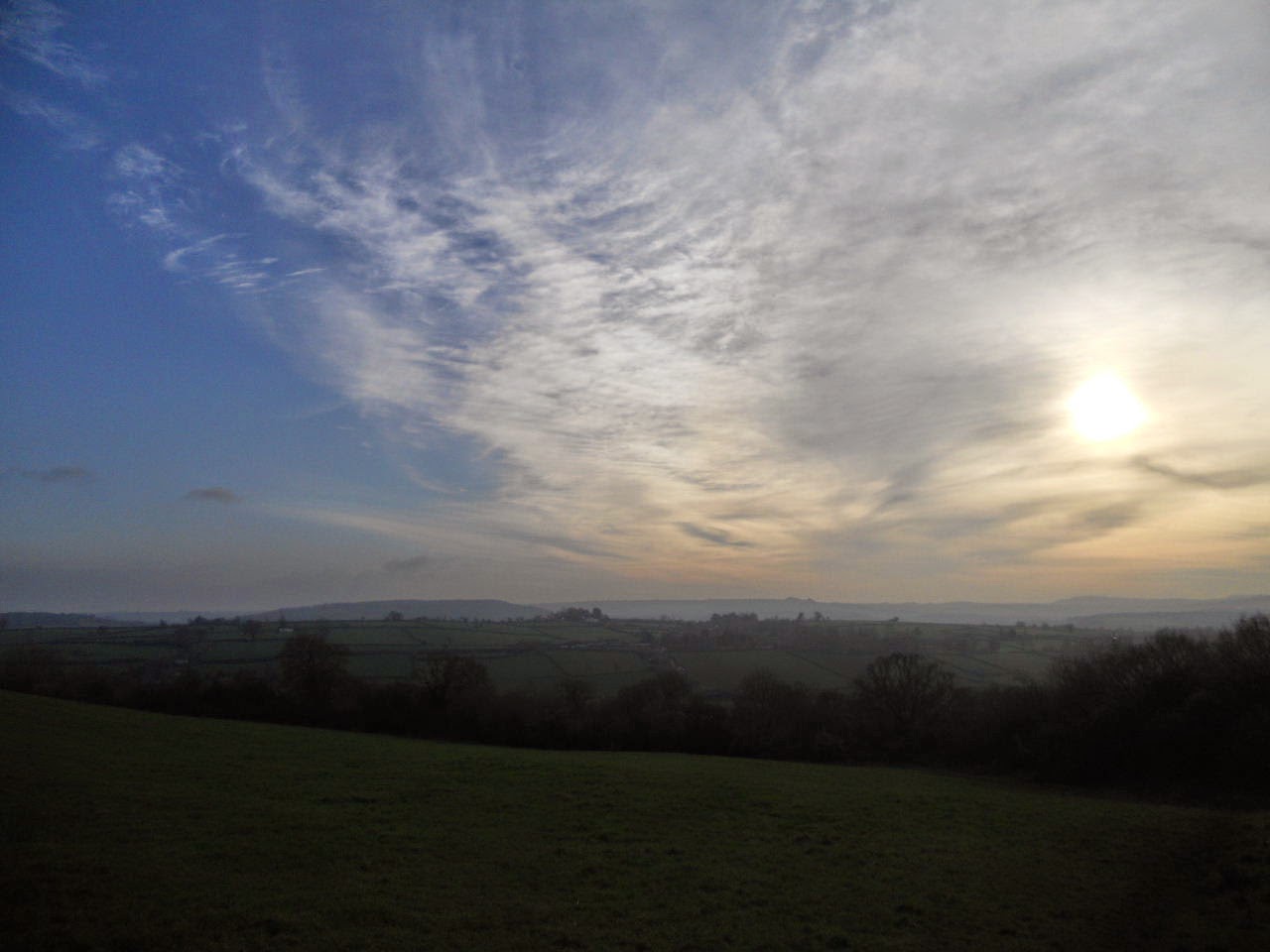 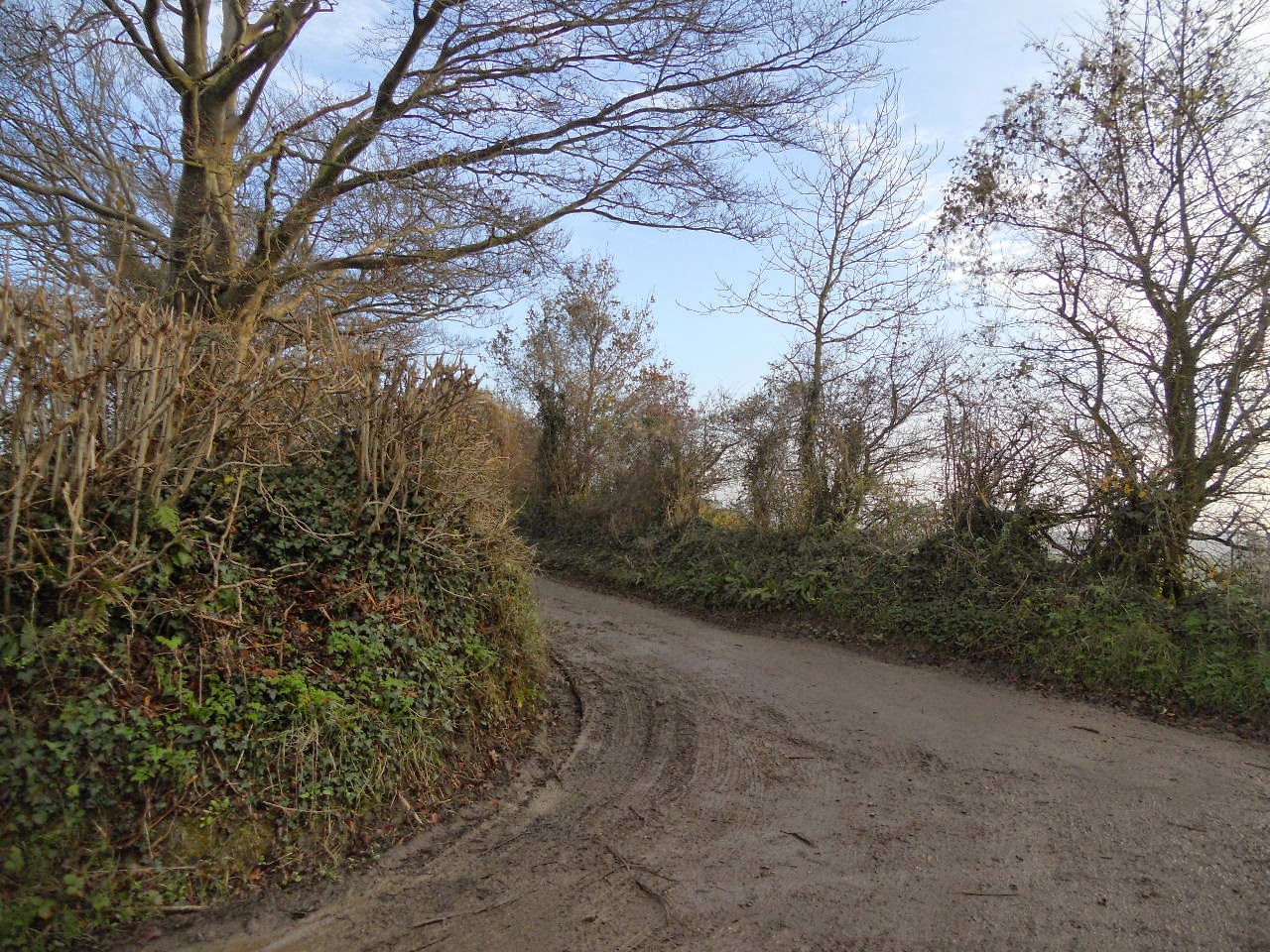 Back to the muddy lane where we had left the car, feeling refreshed and happy filled with gratitude for such a beautiful day, at this time of year something of a rarity.  Although a short walk it was just what was called for - I had seen the news reports of Black Friday and the fighting in the aisles to grab a bargain and had been struggling to understand what is happening in the world these days that people should behave in such a way. I could understand starving refugees behaving in such a maner when food parcels are dropped but for a television or an i-pad?  Surely not.  Black Friday is a comparitively new idea here.  Sadly it is often the worst ideas of American culture that we seem to adopt here in the UK and not their better ones,Thanksgiving now that's something we could adopt perhaps though for all I know that too might have become victim of commercialsim like Christmas. 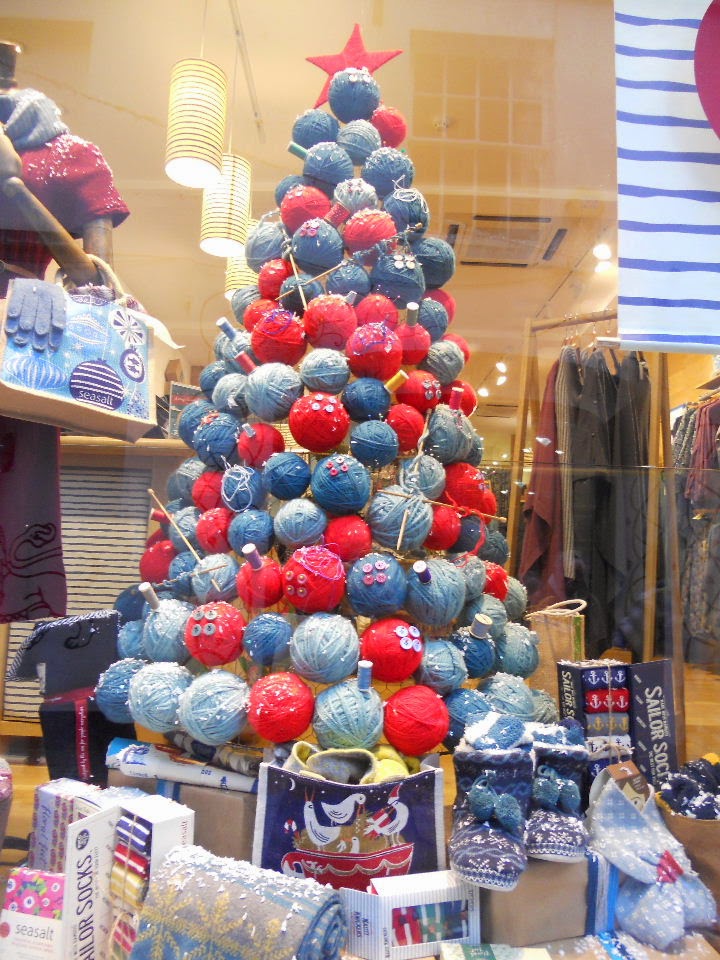 Speaking of Christmas I saw this "tree" in a window display yesterday and thought what a good way to use up one's stash of yarns and reels of thread, thimbles and buttons etc!!
Posted by Marigold Jam at 20:05 14 comments:

November at the seaside 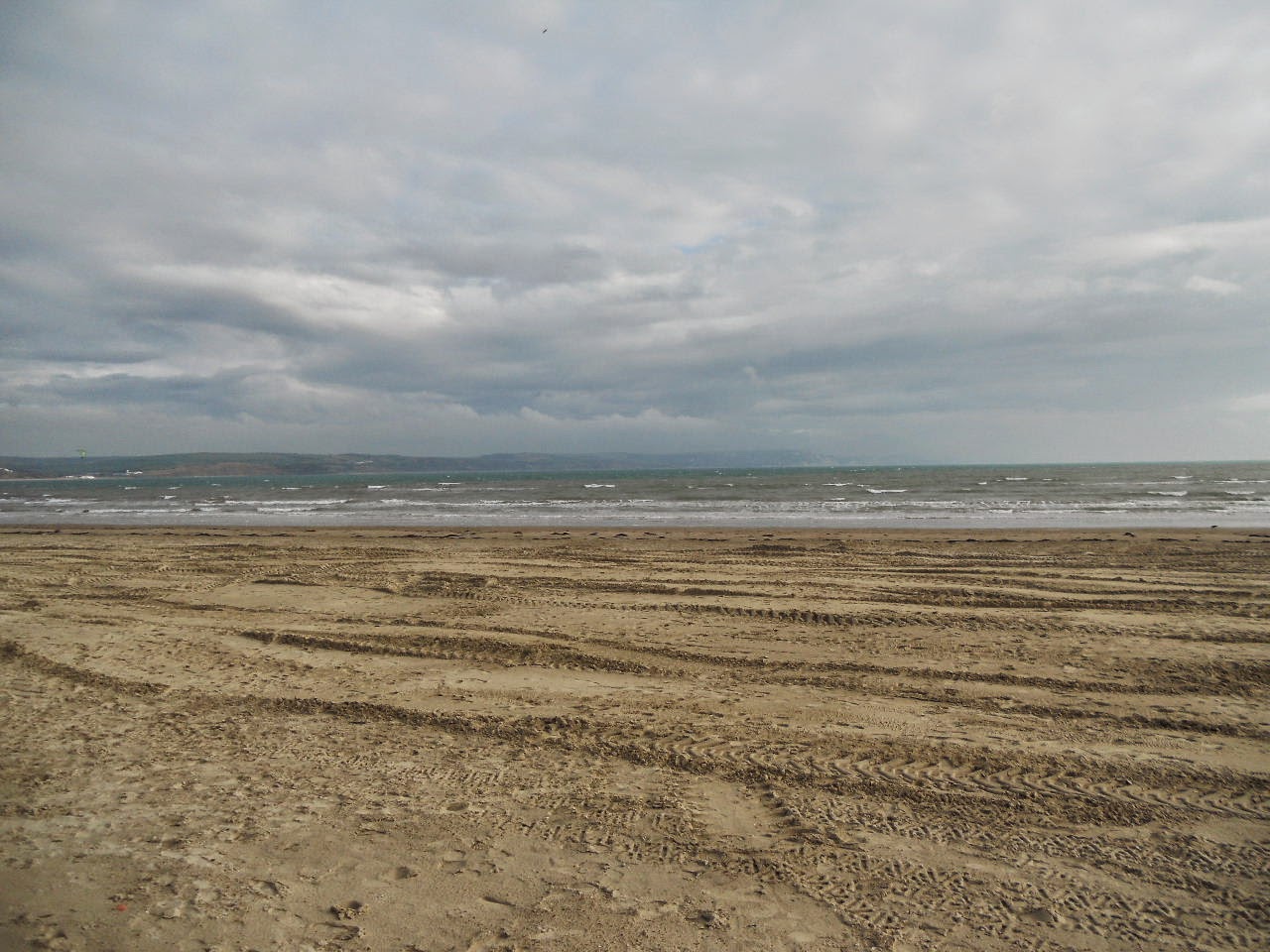 Fancy an outing and a walk with me?  We met a couple of friends yesterday at Weymouth - this was the beach a bit different to how it looked in July here eh? 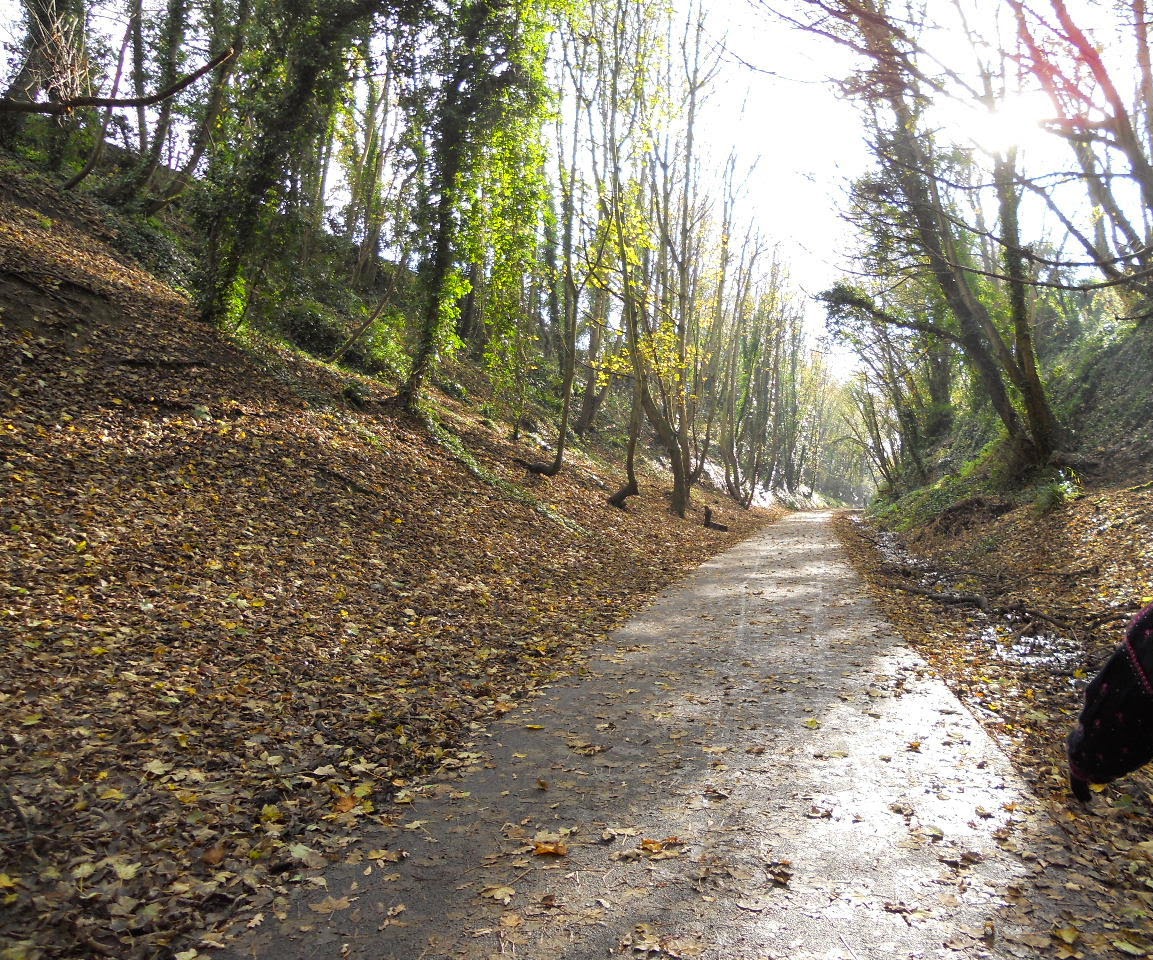 The route to Chesil along the old railway line. 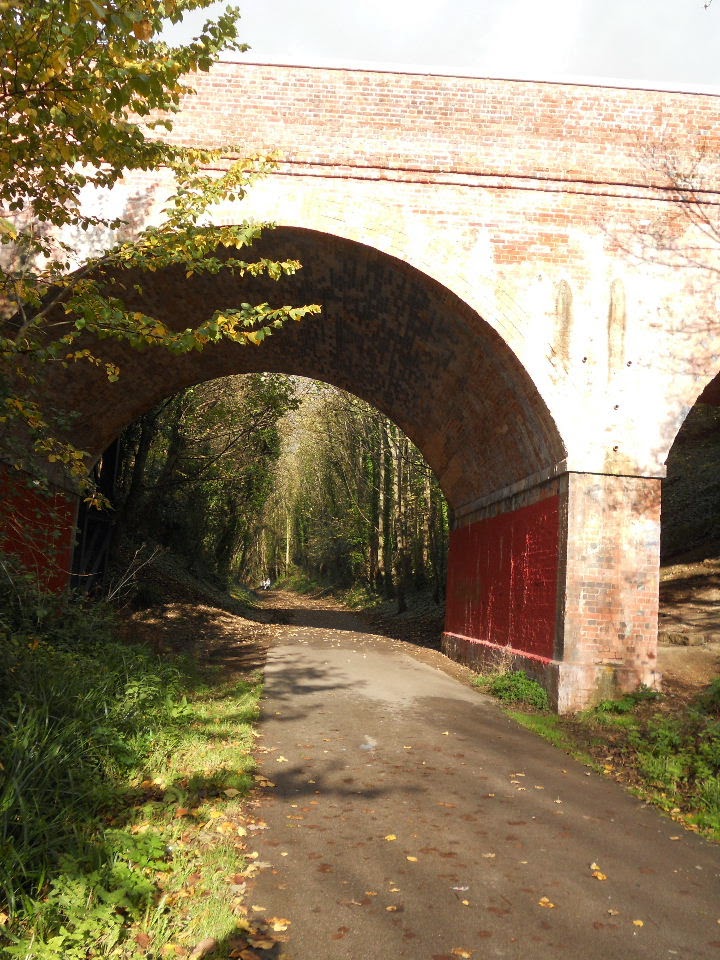 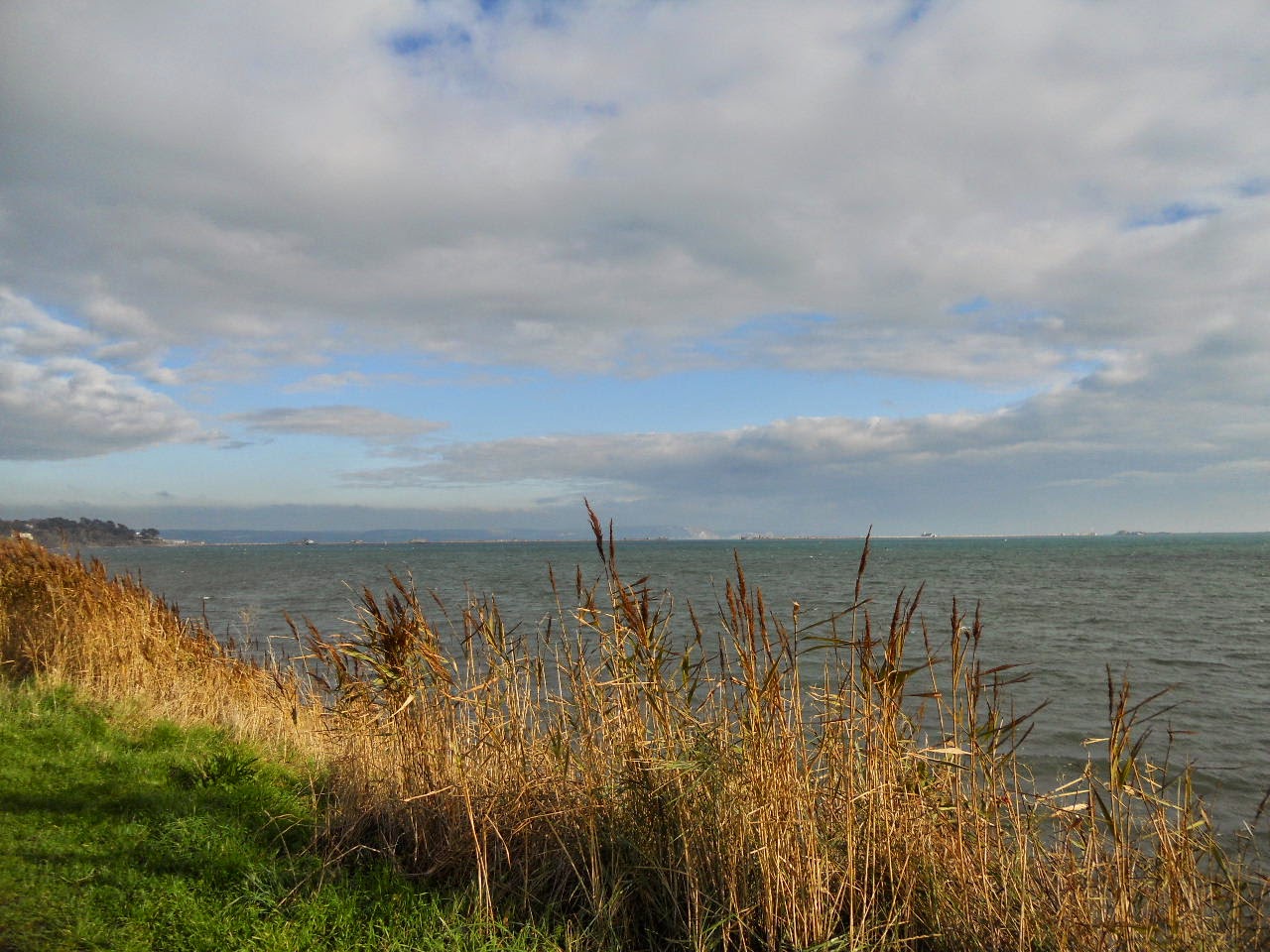 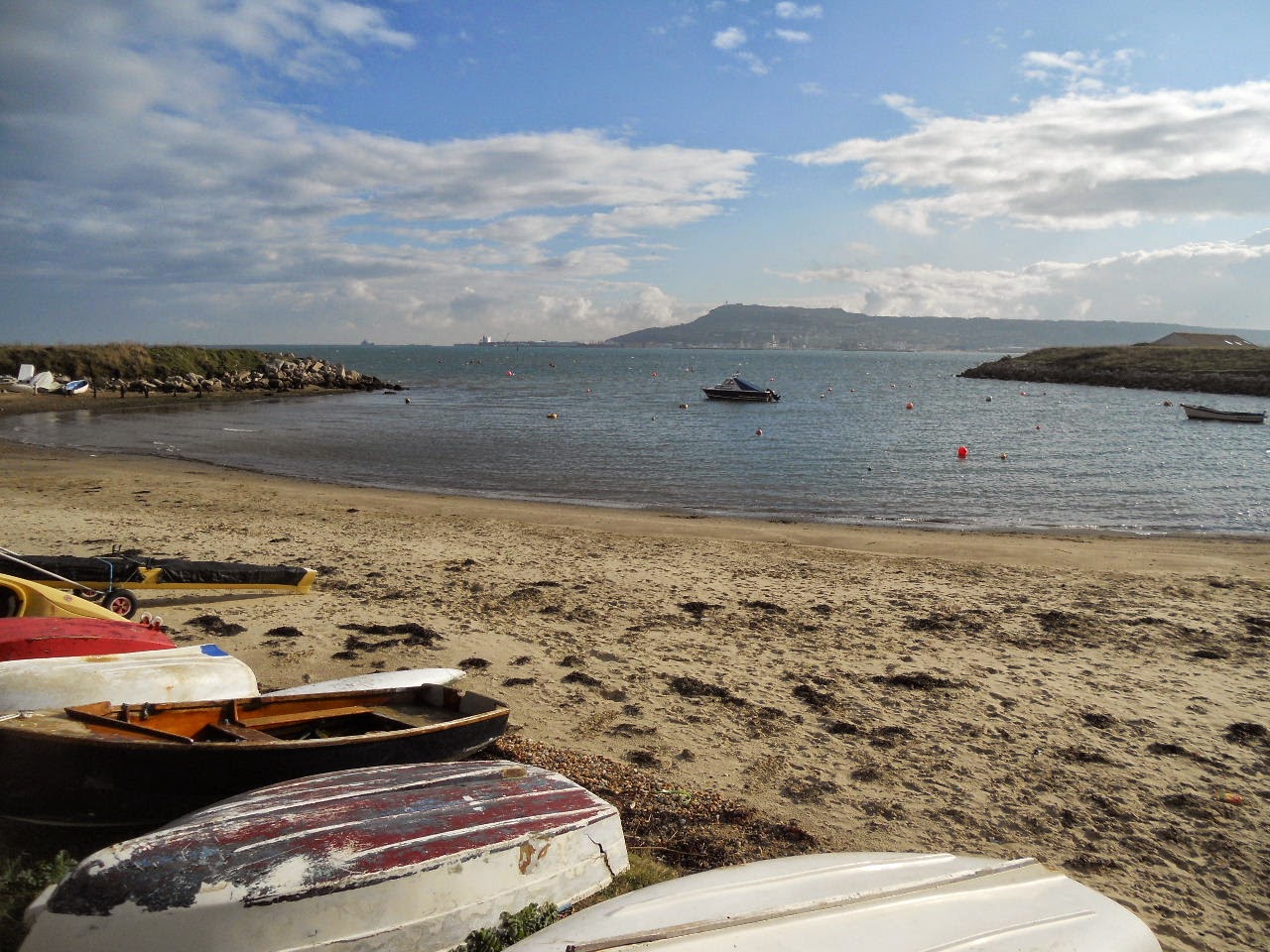 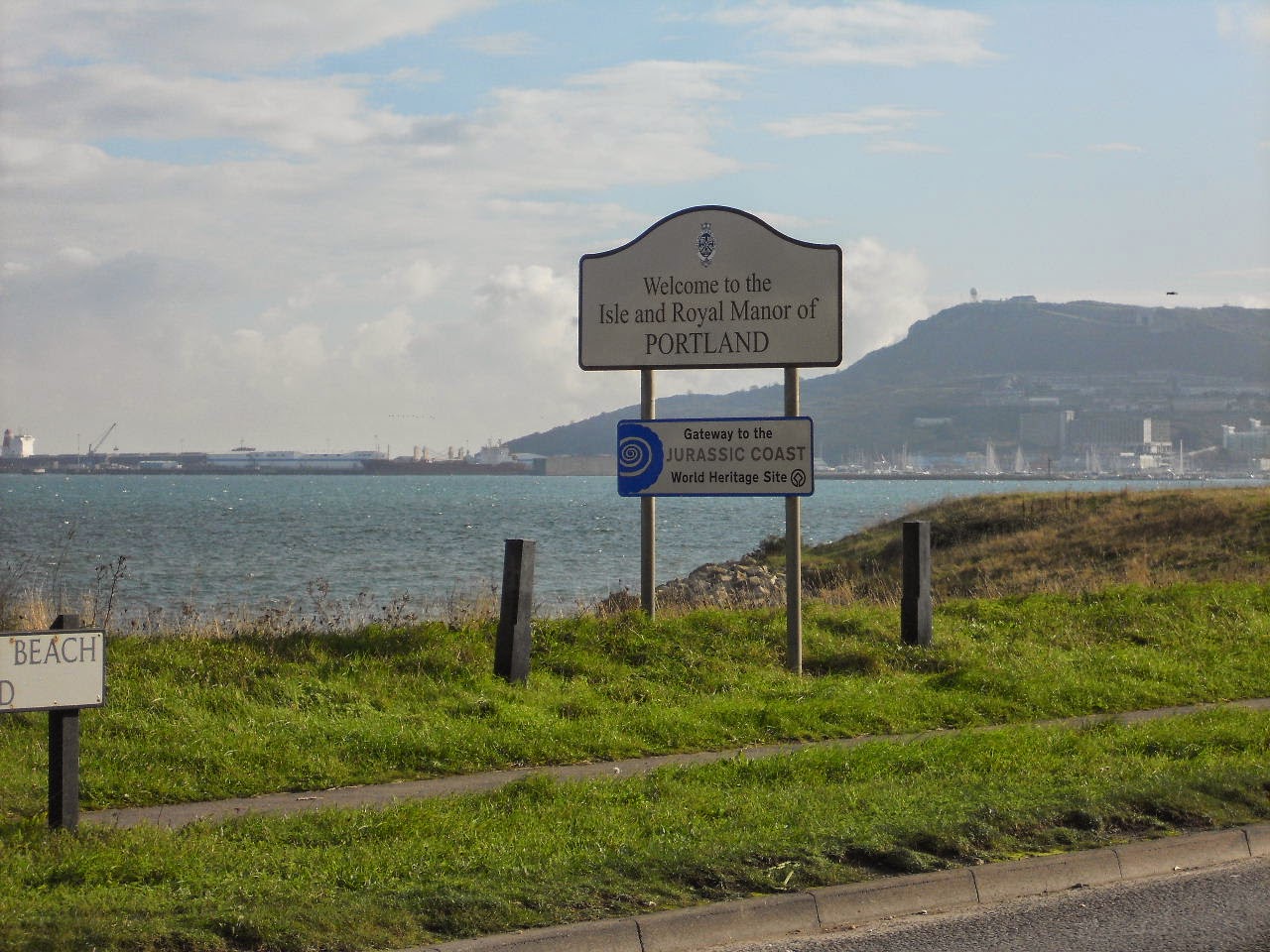 Nearly there and lunch time at the Visitor  Centre just along here. 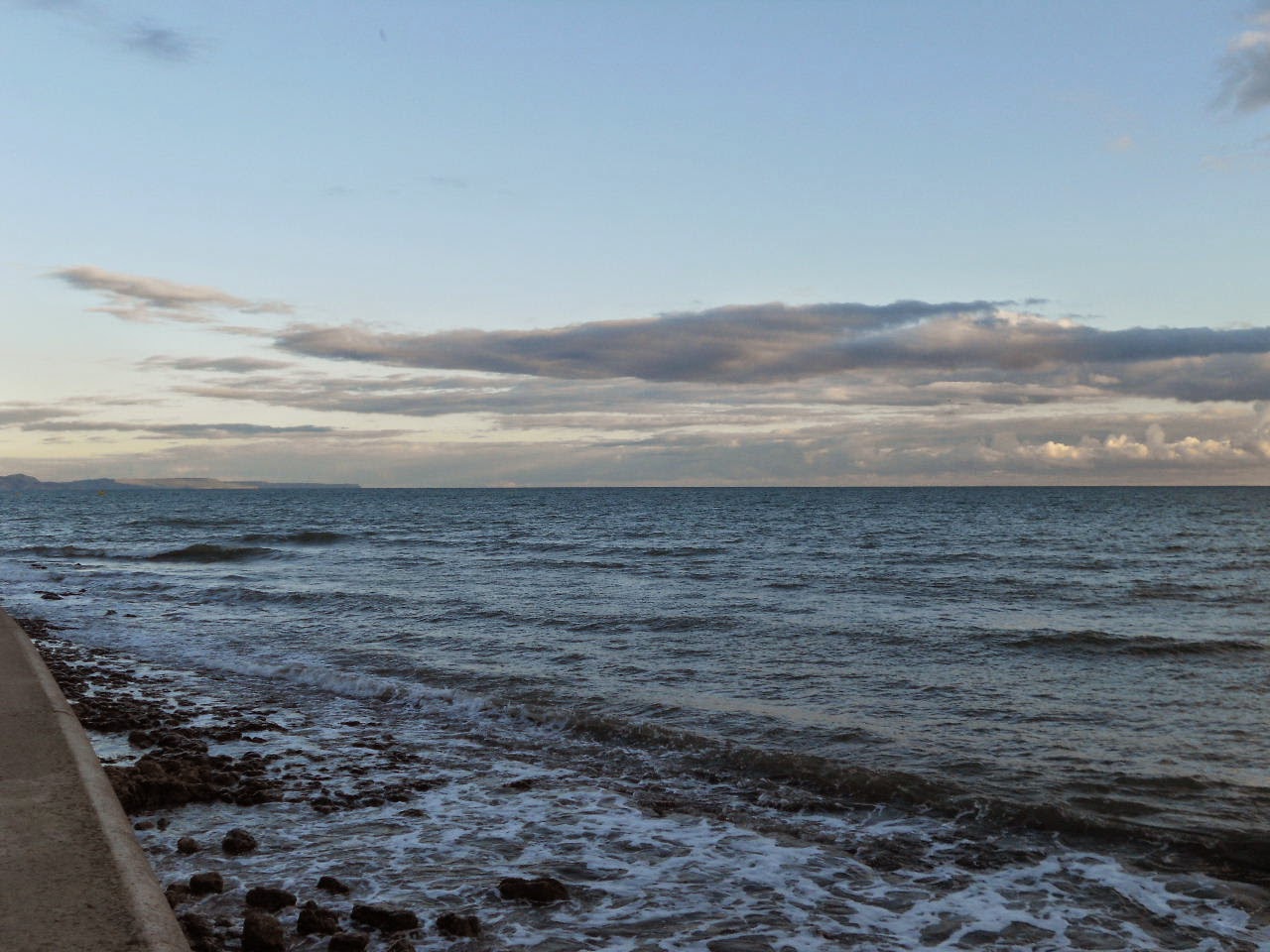 The walk back took us along part of the South West Coast path.  All in all we'd probably done something like 5 miles or so and the sea air, sunshine and good company made it a day for the mental photo album!

Only problem with November walks is that it gets dark so early! We got back to the town for the bus back to the Park and Ride car park at 4.00 and were home indoors at 5.00 but although the sky was stunningly beautiful on our return journey all backlit by the sun below the horizon and looking like a watercolour painting with the inky silhouettes of the trees and the sky background in shades of palest robin egg blue, lemon and apricot it was dark before we got home.
Posted by Marigold Jam at 17:41 23 comments:

Some time ago I joined in a letter swap organised by Elizabeth at Cornish Cream and I was partnered with Kirsi at Kimberlys Kitchen and Garden.  When I went to the blog to check it out I discovered that Kirsi is Finnish and her blog is written in Finnish too - but luckily there is a translation button and even more luckily, even though English isn't Kirsi's first language, her letter when it came was in excellent English!  Phew! 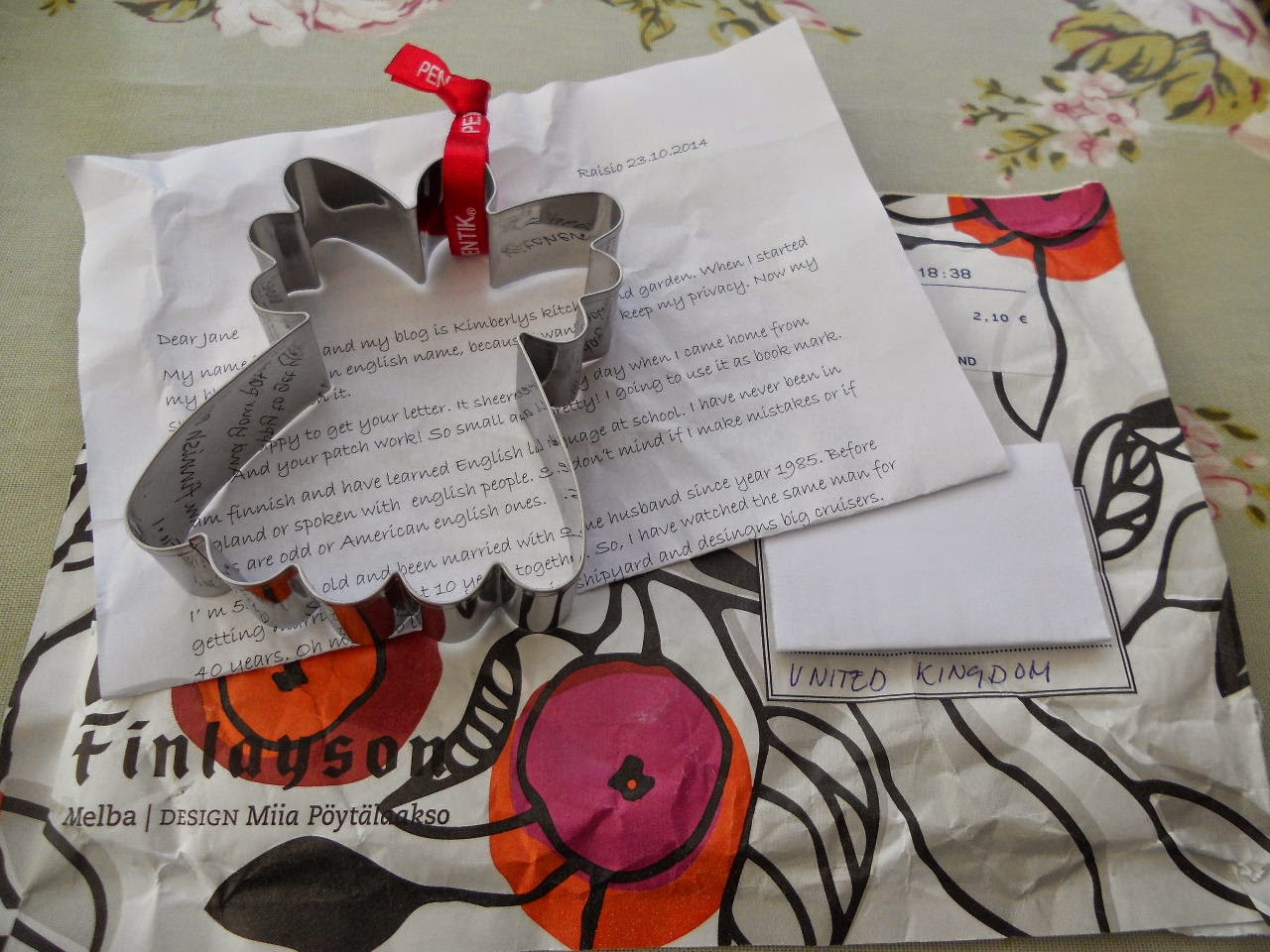 The package arrived in this pretty jiffybag and inside along with a lovely letter which made me feel I already know Kirsi was this dear little angel cutter.  I can see I will now have to find a suitable recipe to make some cookies for Christmas or maybe I'll put it on the tree instead and save the calories!  Thank you so much Kirsi and I do hope that we will become good friends through the medium of letter writing.  I know almost nothing about Finland and am looking forward to getting to know both Kirsi and her country, traditions and culture as we correspond.  I will reply to you personally very soon Kirsi and thank you so much for the thoughtful gift and for your interesting letter.

I have been taking a rest and a bit of a detox from blogging and trying to reduce my use of the internet somewhat but rather like dieting when you have to eat something and cannot go cold turkey as you might if wanting to give up smoking or alcohol or whatever I do need to use the computer at times otherwise my friends will all think I have died!  I do think however that I had been using it more than necessary and the following quotes, found in a journal I picked up in Waterstones and was tempted to buy, might illustrate my views:

We didn't have Facebook when I was young - we had phone book but you wouldn't waste an afternoon on it.

We are like Hansel and Gretel leaving crumbs of our personal information everwhere we travel through the digital woods.

I like hanging round people who knit they are usually in a good mood - people who are staring into I-phones and so on whilst demanding your attention at the same time are not as much fun!

and another I saw somewhere which said something about learning to let oneself wonder once again ie not to just click on the internet and find the answer to e verything instantly.

So for the time being I am not around much on-line and am finding more time for the things that matter but I am sure I will be back when I have something interesting to say!
Posted by Marigold Jam at 15:42 9 comments: