Thank you all for your kind birthday wishes on my last post.  As I said I was feeling very positive and ready to start on my bonus years and to that end I decided that I would stop trying to be the person I felt everyone expected me to be and instead to do what I liked (as long as it didn't hurt anyone else) and be who I wanted to be and one of the things I did was to take a leaf out of a French friend's book and become a little Bohemian and to hell with what people think.

In my youth I had always shunned bright colours not wishing to be noticed and my colours were mainly subtle greys, olives and mustards.  I never had beige but I think I was a beige person if you know what I mean?!  I lacked the confidence to go for the modern 60's fashions and colours and I lived in Sherborne too which was very conservative with a small "c" as well as a capital one and several years behind London in fashions.

As I have got older I have gained in self confidence and gradually I have chosen more colourful wardrobe as the drab shades of my youth did me no favours at all and after my birthday I had mentioned to a friend that I was thinking of dyeing my hair as some kind of statement and she was all for it and egged me on to buy the purple dye.  So I did dye my hair - not all of it just a section and I was actually quite pleased with the new me. 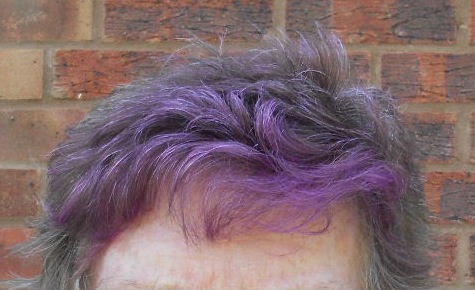 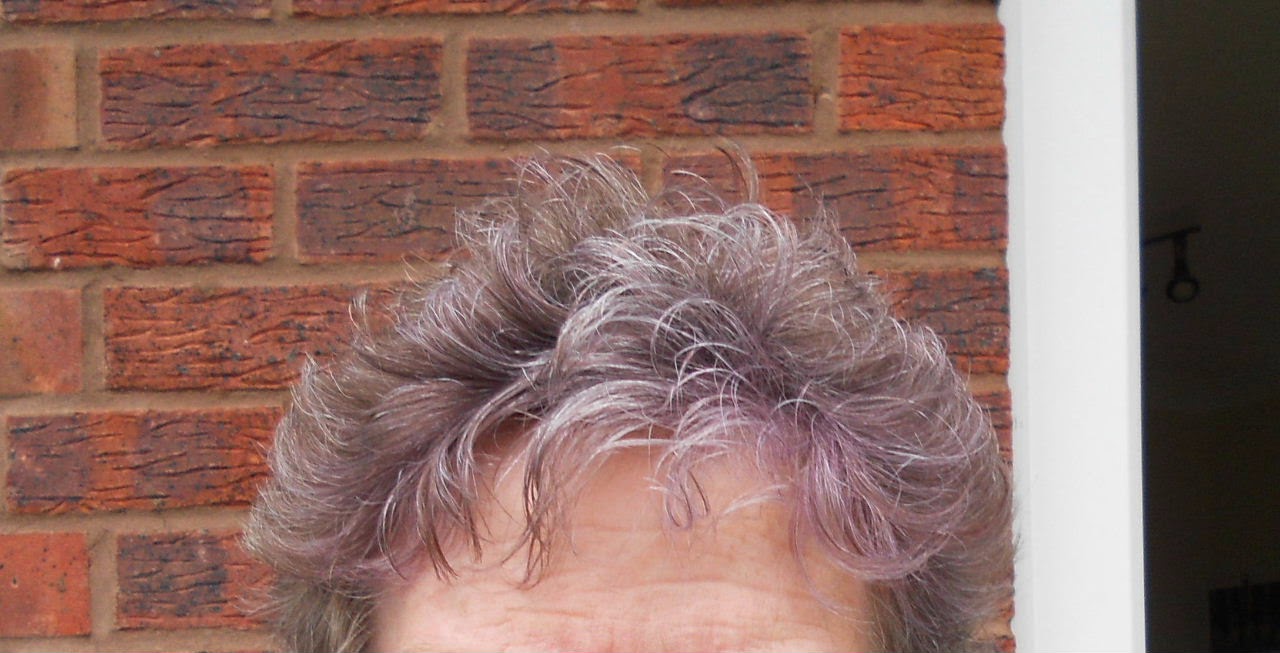 The colour was meant to last for 6 - 8 shampoos but just a week later when I washed it for the second time this was all that was left of my "statement"!  Here I am my normal mousey colour with only the faintest tint of purple left!  I hadn't realised till I took these selfies just how much grey there now is in my mouse.  So what now?  Shall I go for broke and have a tattoo instead, get it permanently coloured at the hairdresser's or sink back into my country mouse personna? I'm joking about the tattoo as I would never have the courage to have that done - it took me two attempts to get my ears pierced and I am not keen on tattoos let alone on old ladies!
Posted by Marigold Jam at 17:58 26 comments: 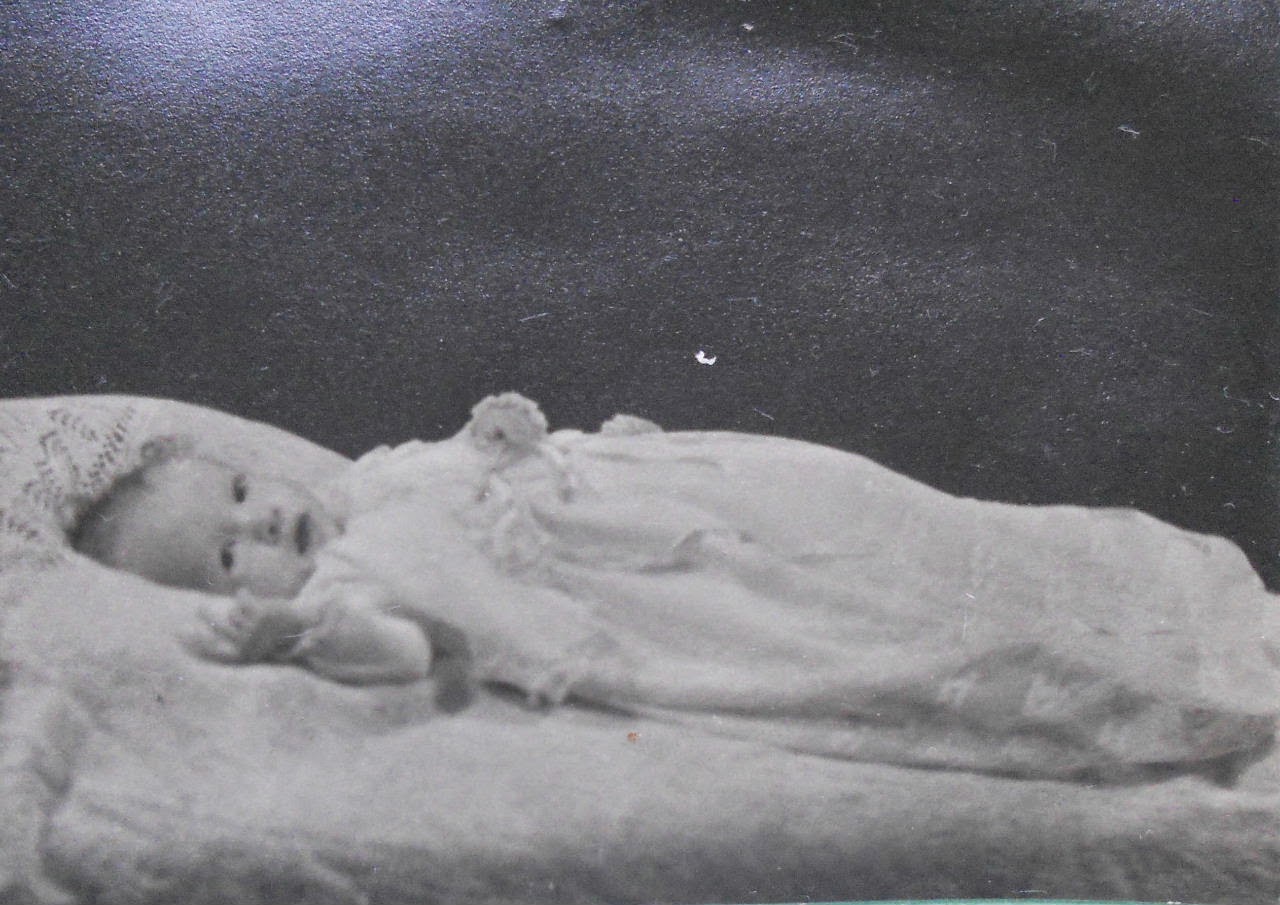 On 5th May 1944 this little girl was born so in 2014 she reached her 70th birthday!  What a different world she sees in the twenty first century to that which surrounded her when this picture was taken!  At that time the UK was still at war, food was rationed and times were dangerous and difficult (and photos black and white!) but of course she knew nothing about all this all she cared about was having her mother's love and affection which she had in plenty.  How times have changed - perhaps more rapidly than in any previous 70 years it's hardly surprising that some of us can't keep up with it all!  I had intended to link this post with the last one and talk about all the changes I have seen in the past 70 years but then I thought you might prefer to join me in my birthday celebrations instead? 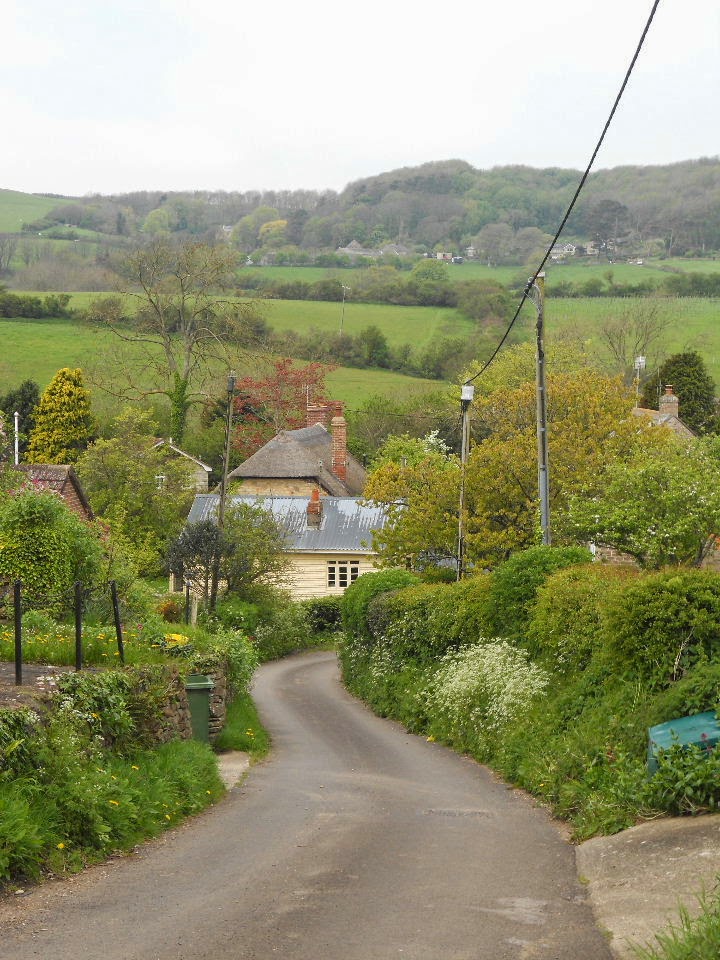 I chose to spend my birthday walking in the bluebell woods near Eype on the south coast near Bridport and to have lunch at the quirky little cafe at Down House Farm.  What a wonderful way to spend a special day - I can honestly say it was the best birthday ever!  Join me on my day out if you fancy a walk in beautiful countryside. 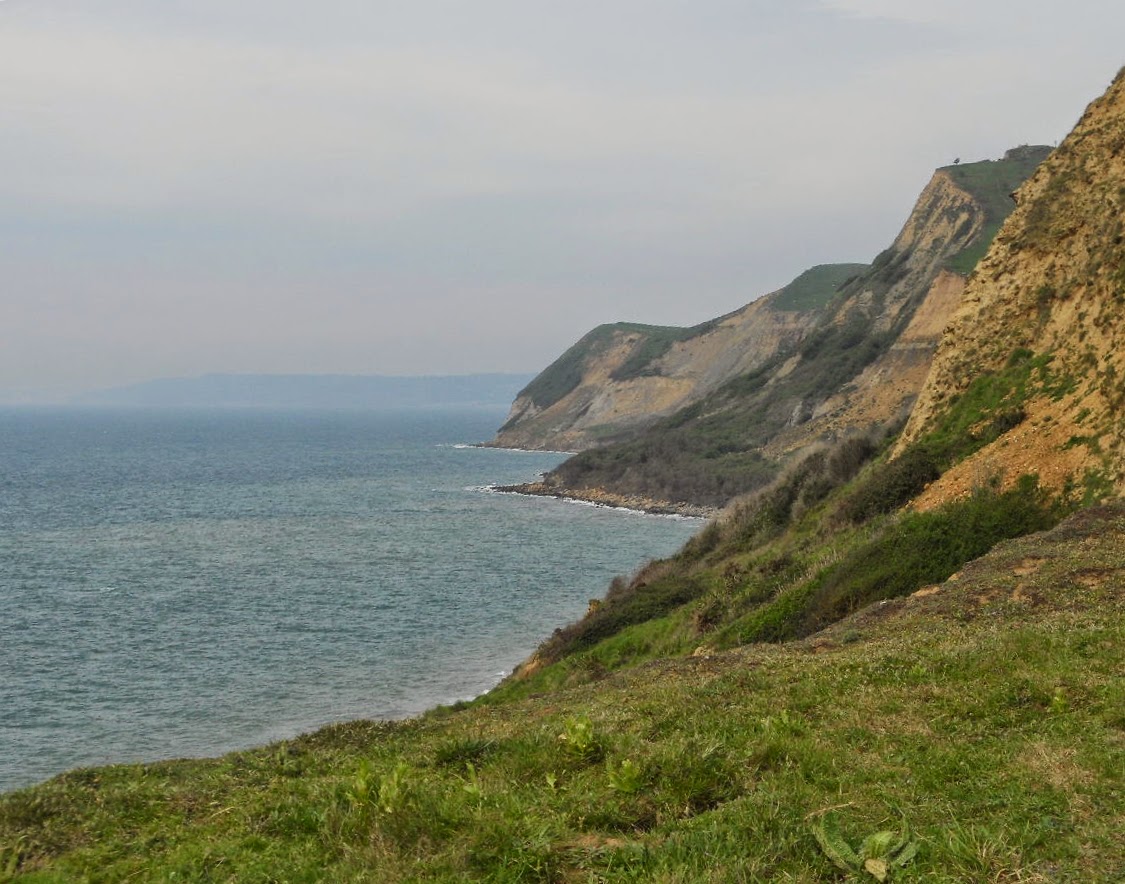 Having parked the car we set off on our walk through the village and then along the South West Coast Path - sometimes the sun came through and sometimes not as we made our way along the cliff tops - not getting too near the edge remembering what had happened to the coastline during the winter! 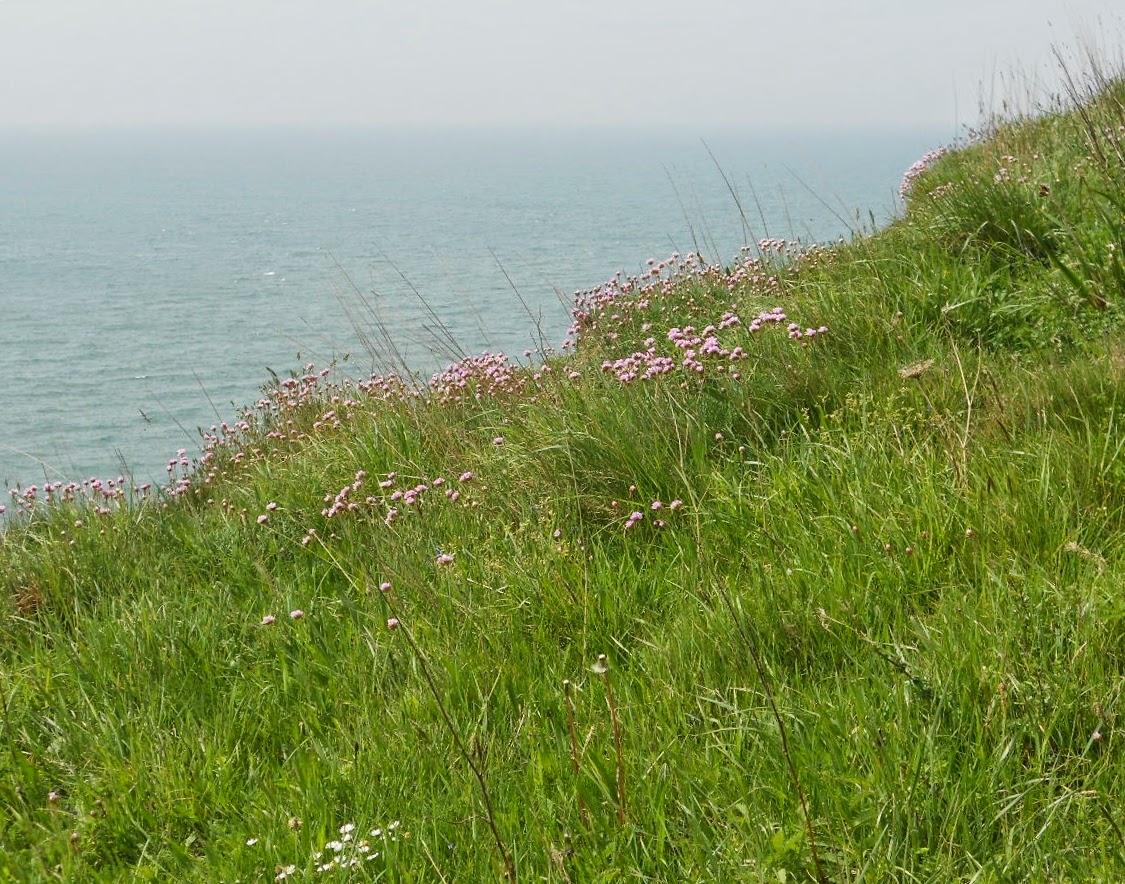 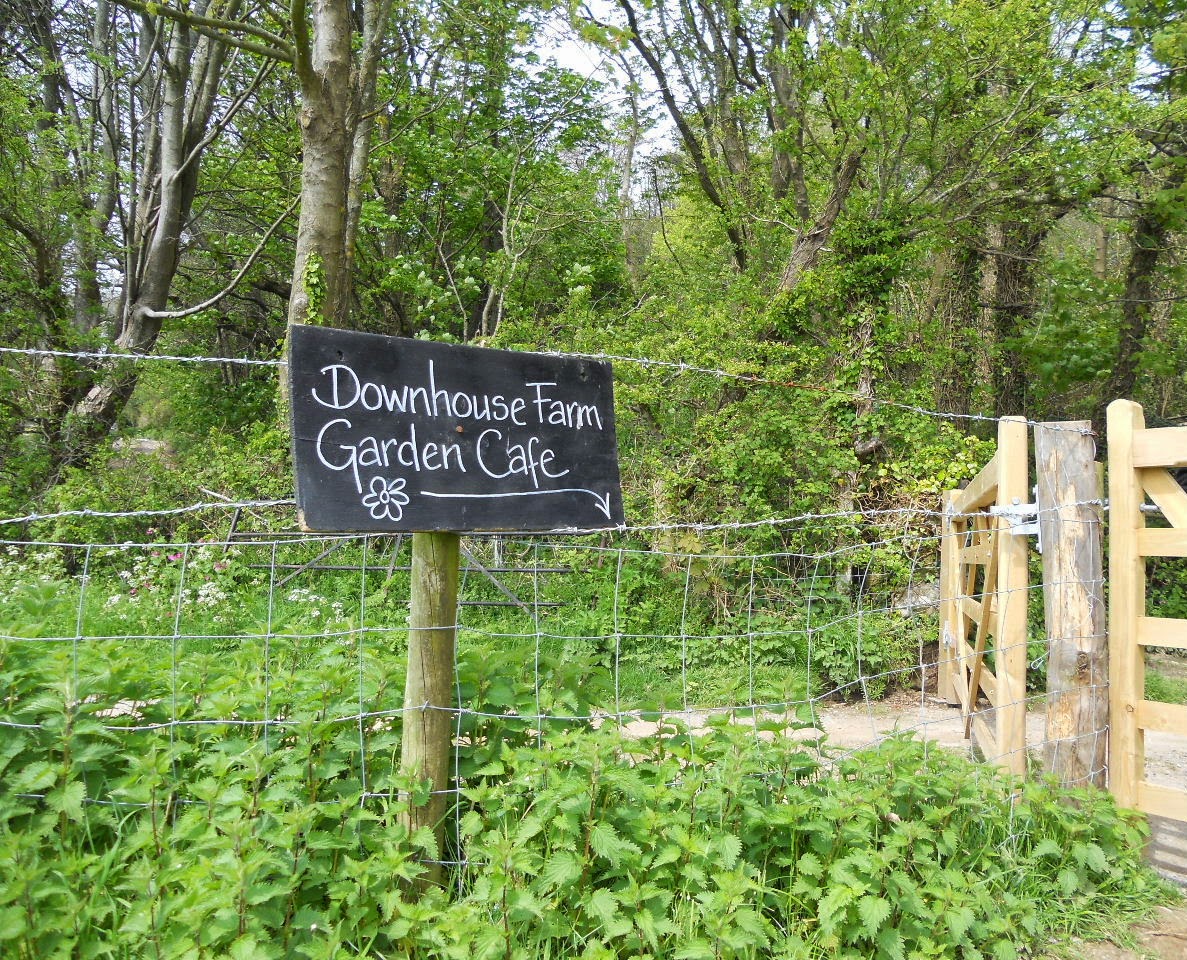 After about an hour we reached the cafe we were headed for - it was only just mid-day but we decided to eat whilst the going was good and the cafe garden not completely full of others out on the Bank Holiday in the fine weather. 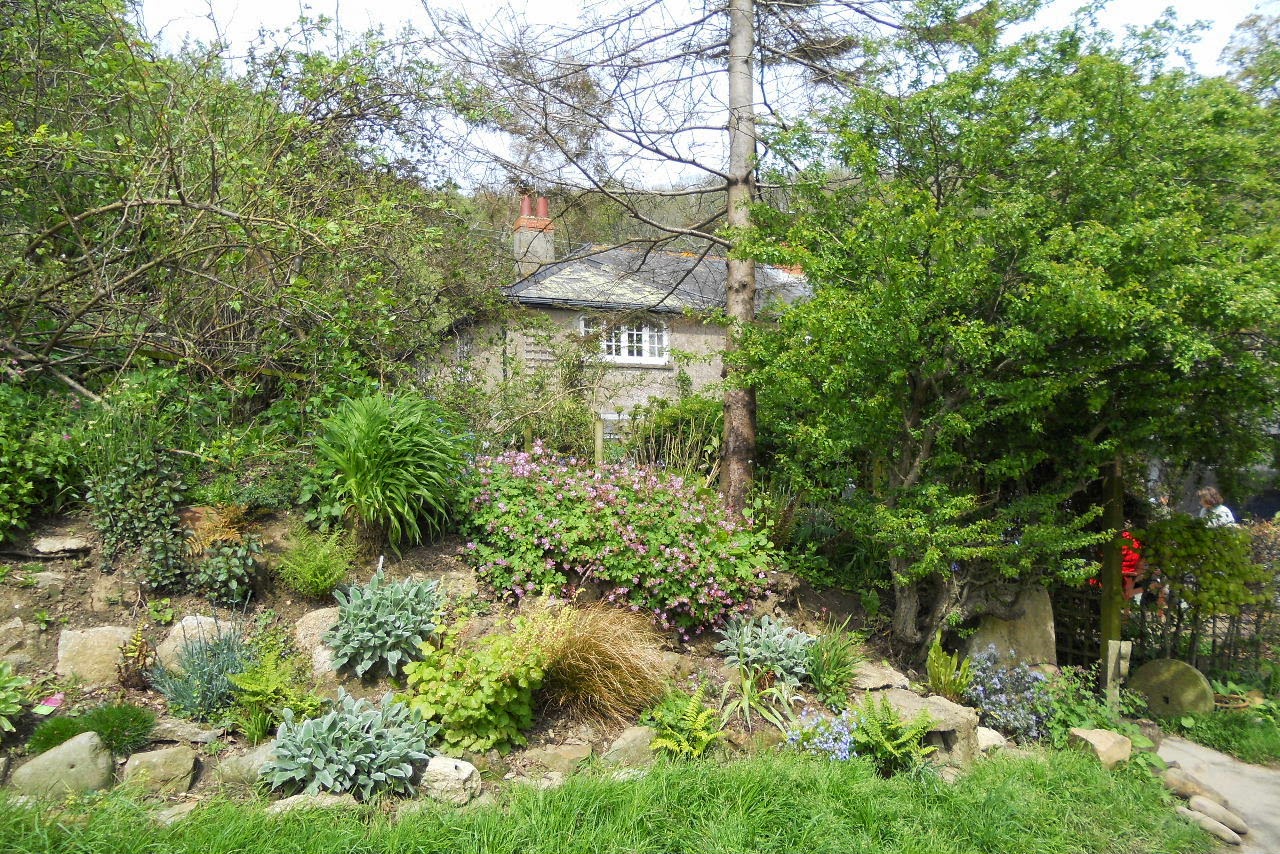 Here is the cafe hidden amongst the plants. 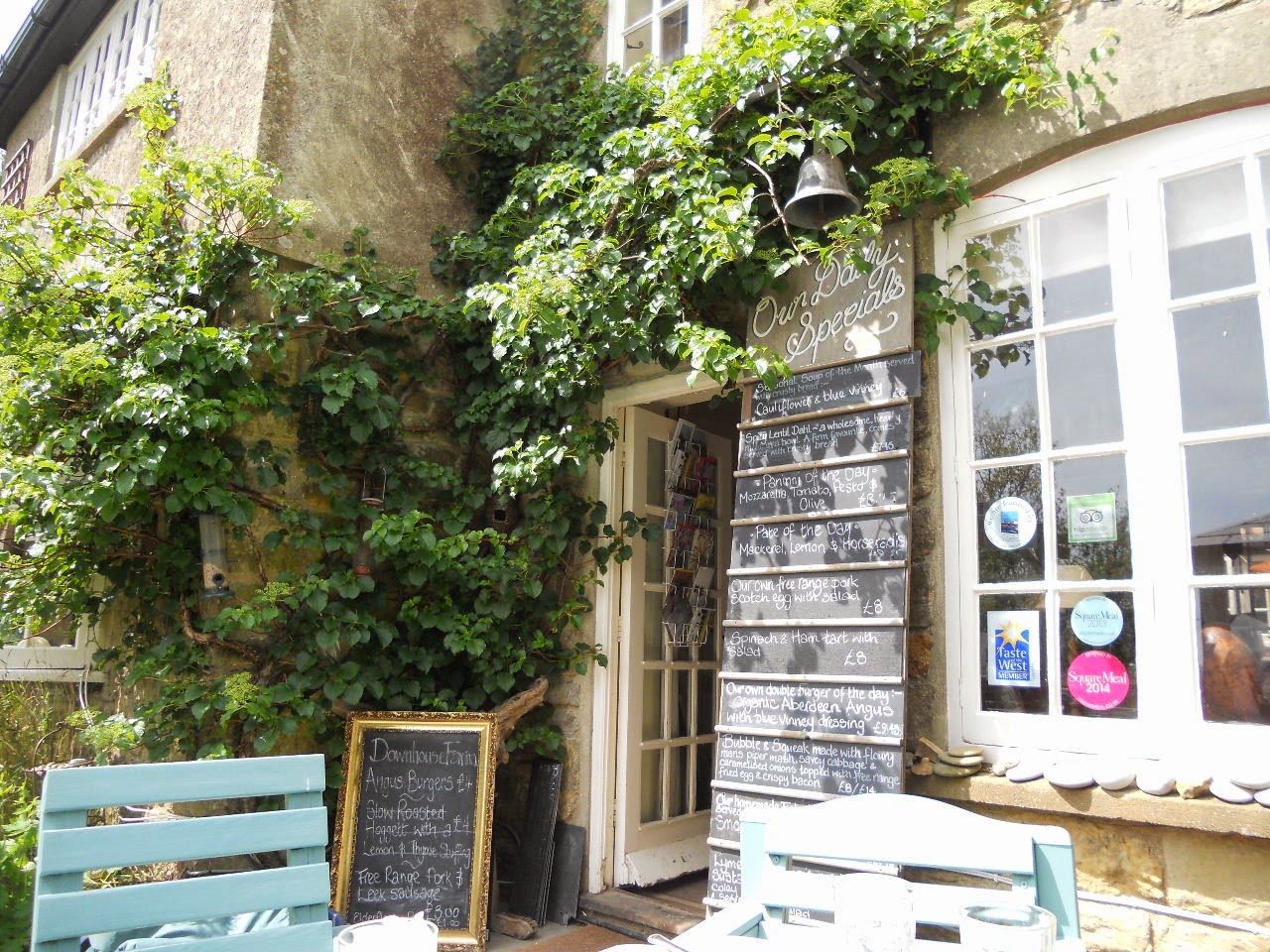 It was hard to chose from the extensive menu... 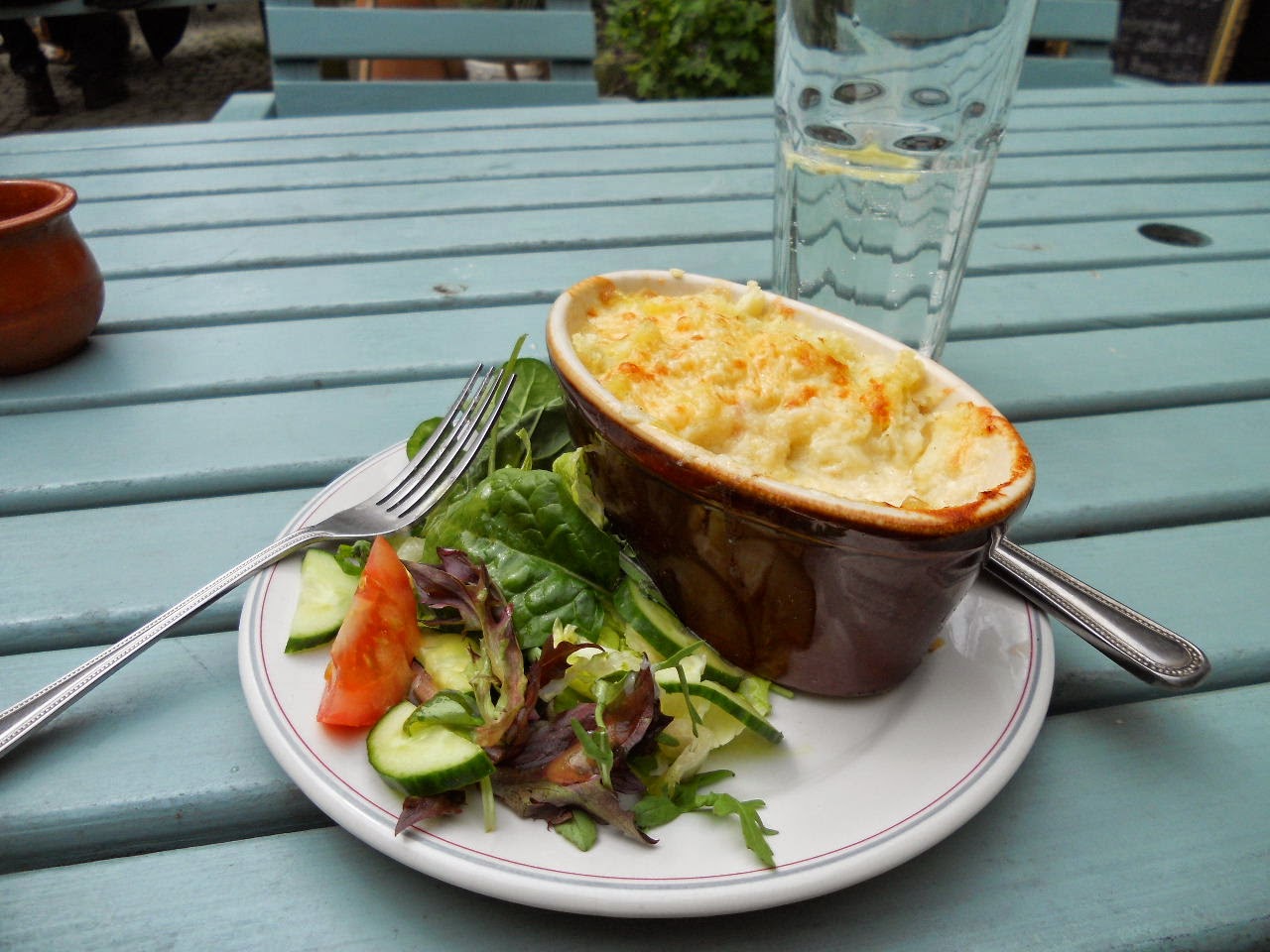 ...but we both chose the fish pie with salad and very tasty it was too eaten in the sunshine of the pretty courtyard. 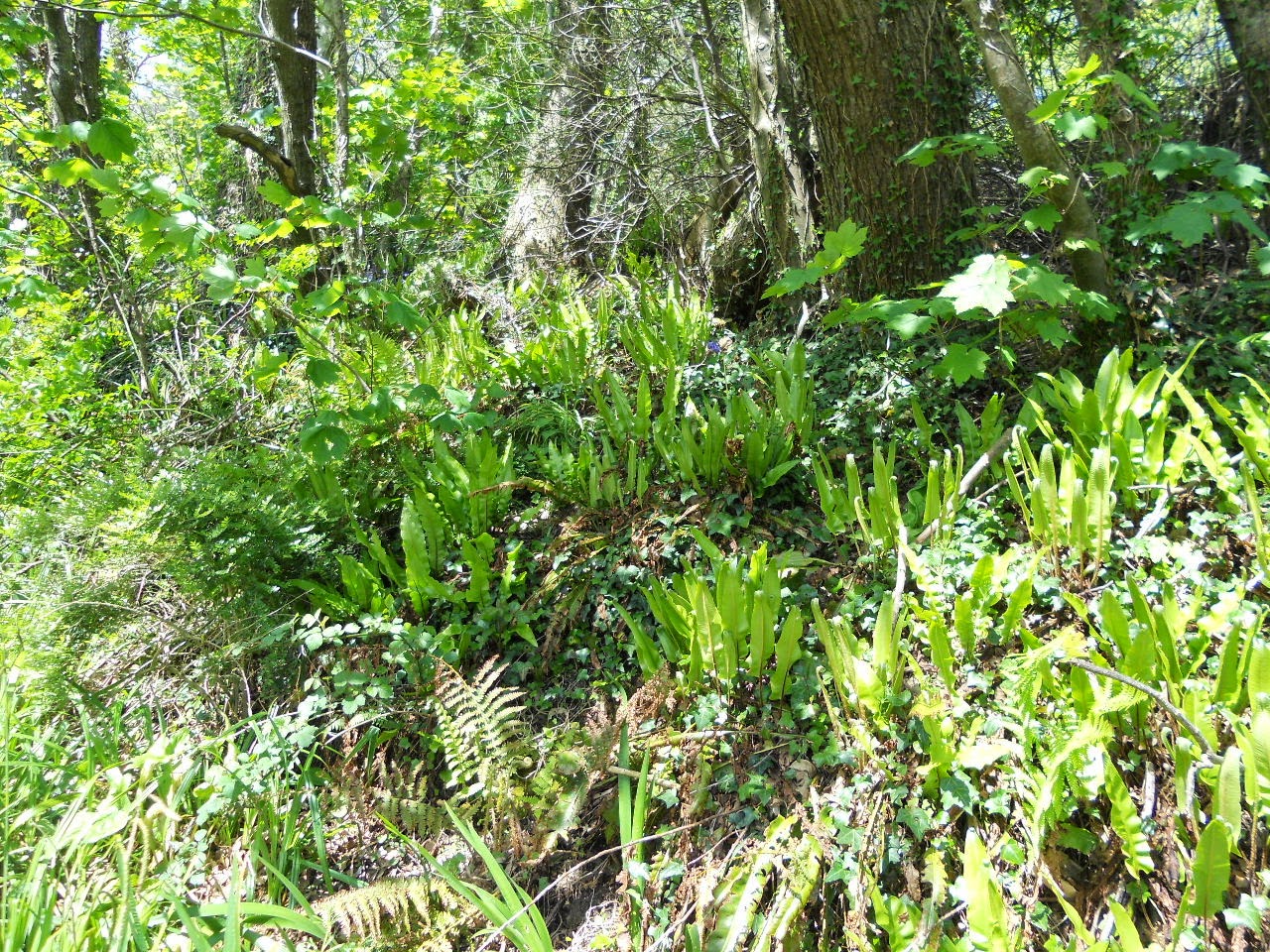 After lunch we set off for the woods - I loved the way these pretty harts' tongue ferns curled at the tips as they unfurled as did the bracken fronds we noticed too looking for all the world like little sea horse tails I thought! 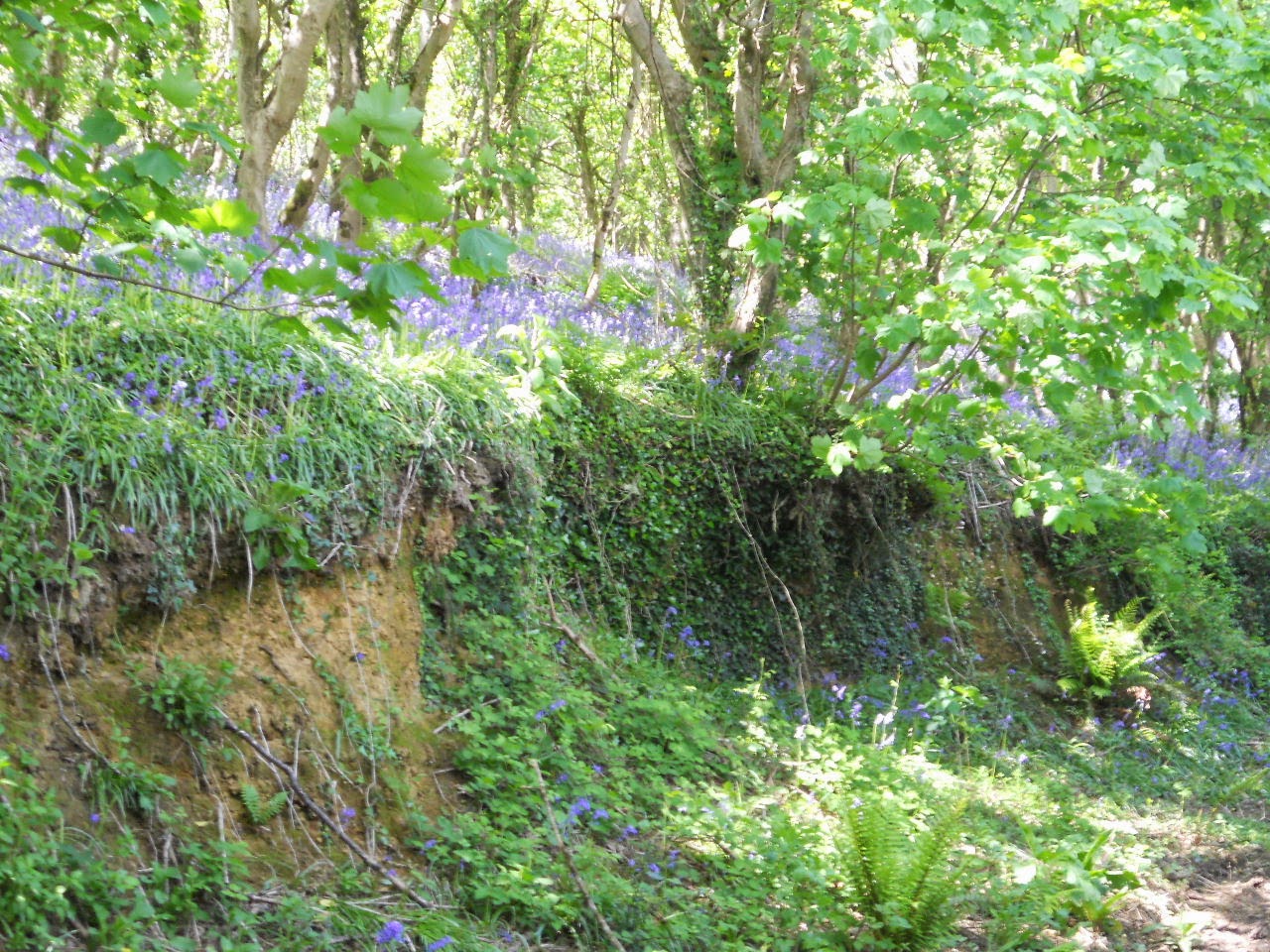 Our path led along here and we were thrilled with the bluebells we saw but another couple walking the opposite way said that they were even better further up the path. And indeed they were!  I had never seen quite so many and all that indredible blue which is so difficult to capture and the faint perfume filling the air.  I got a bit carried away with the camera! 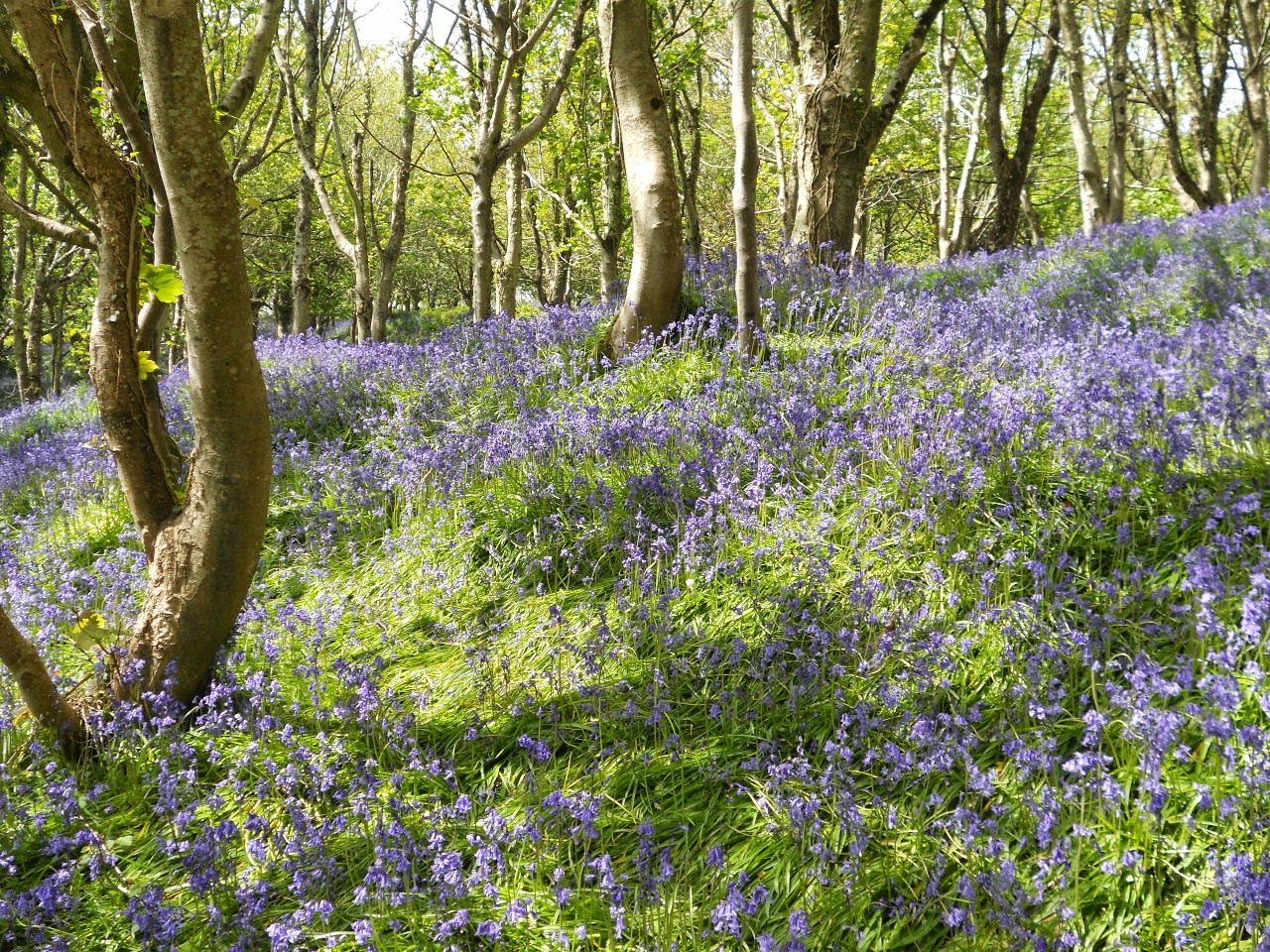 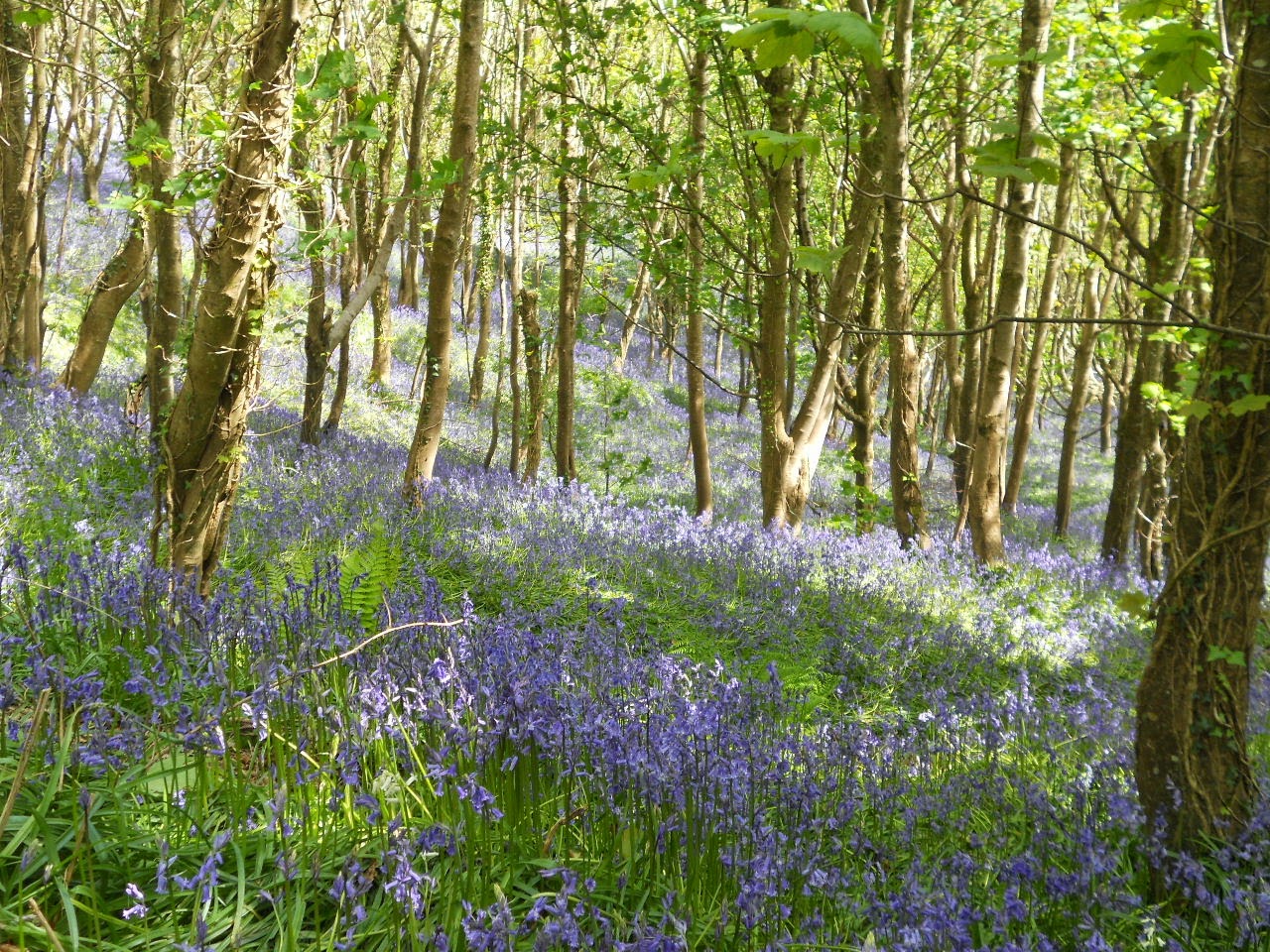 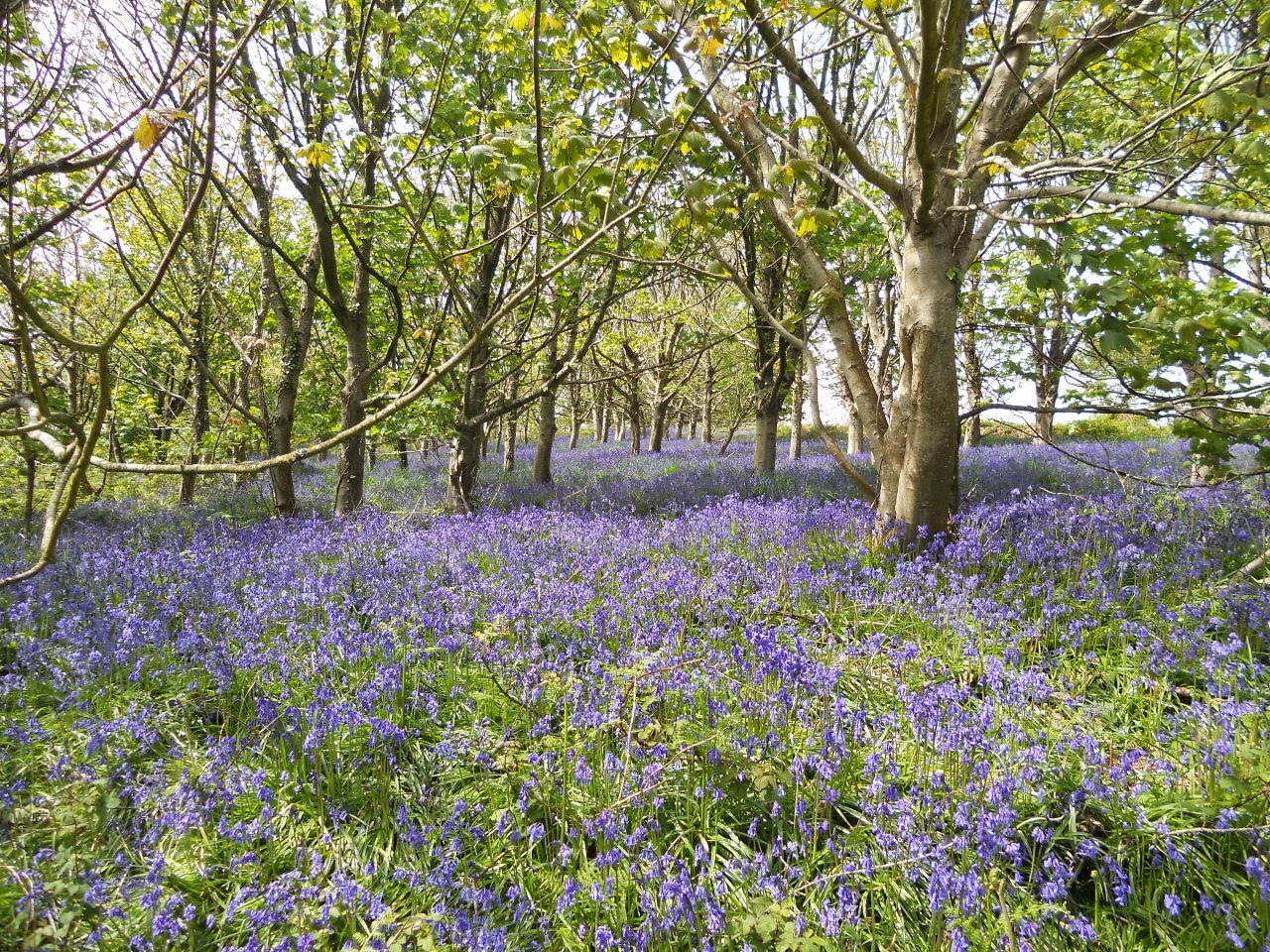 We walked for miles and always there were bluebells with an occasional glimpse of the sea a different blue. 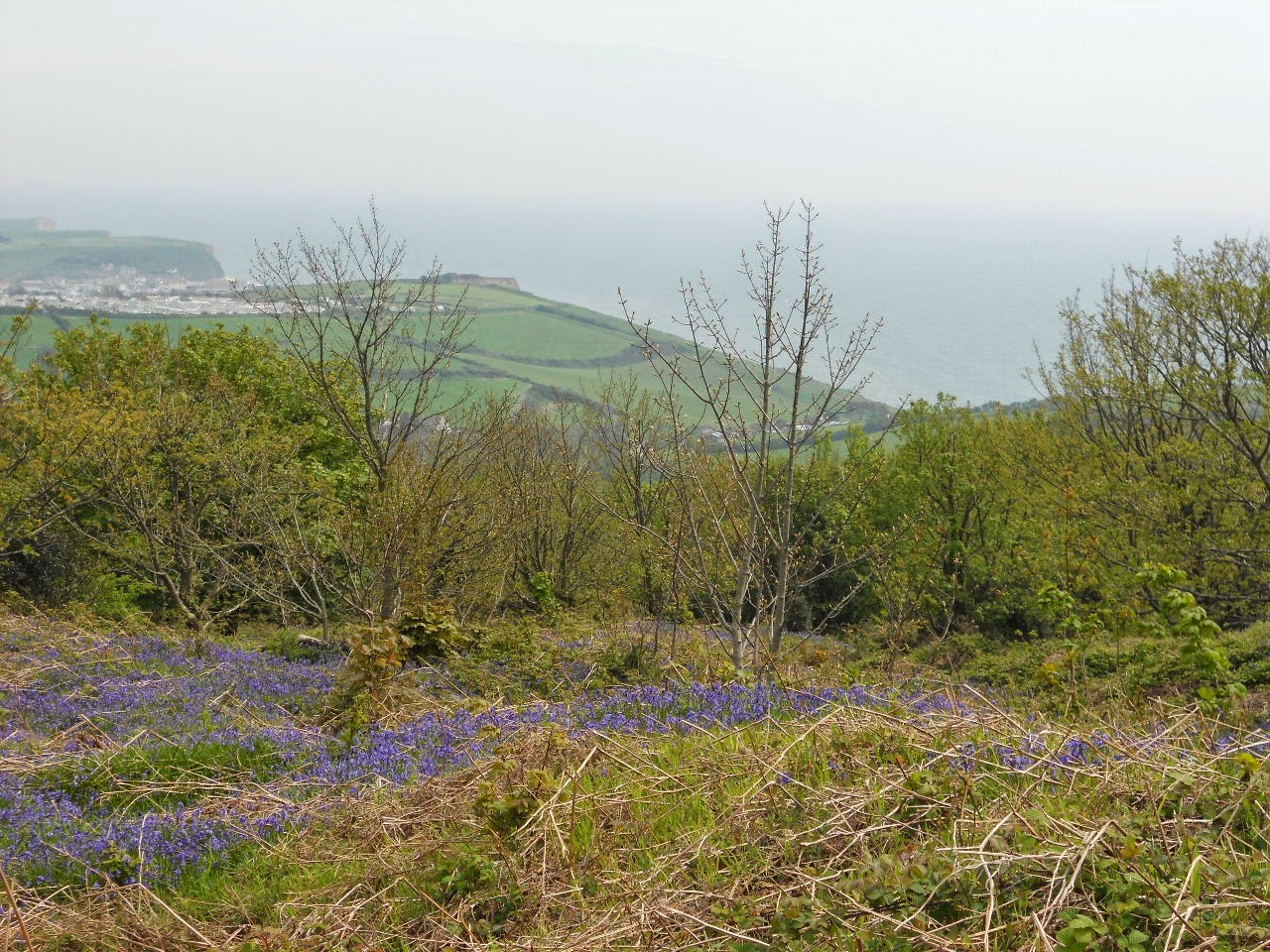 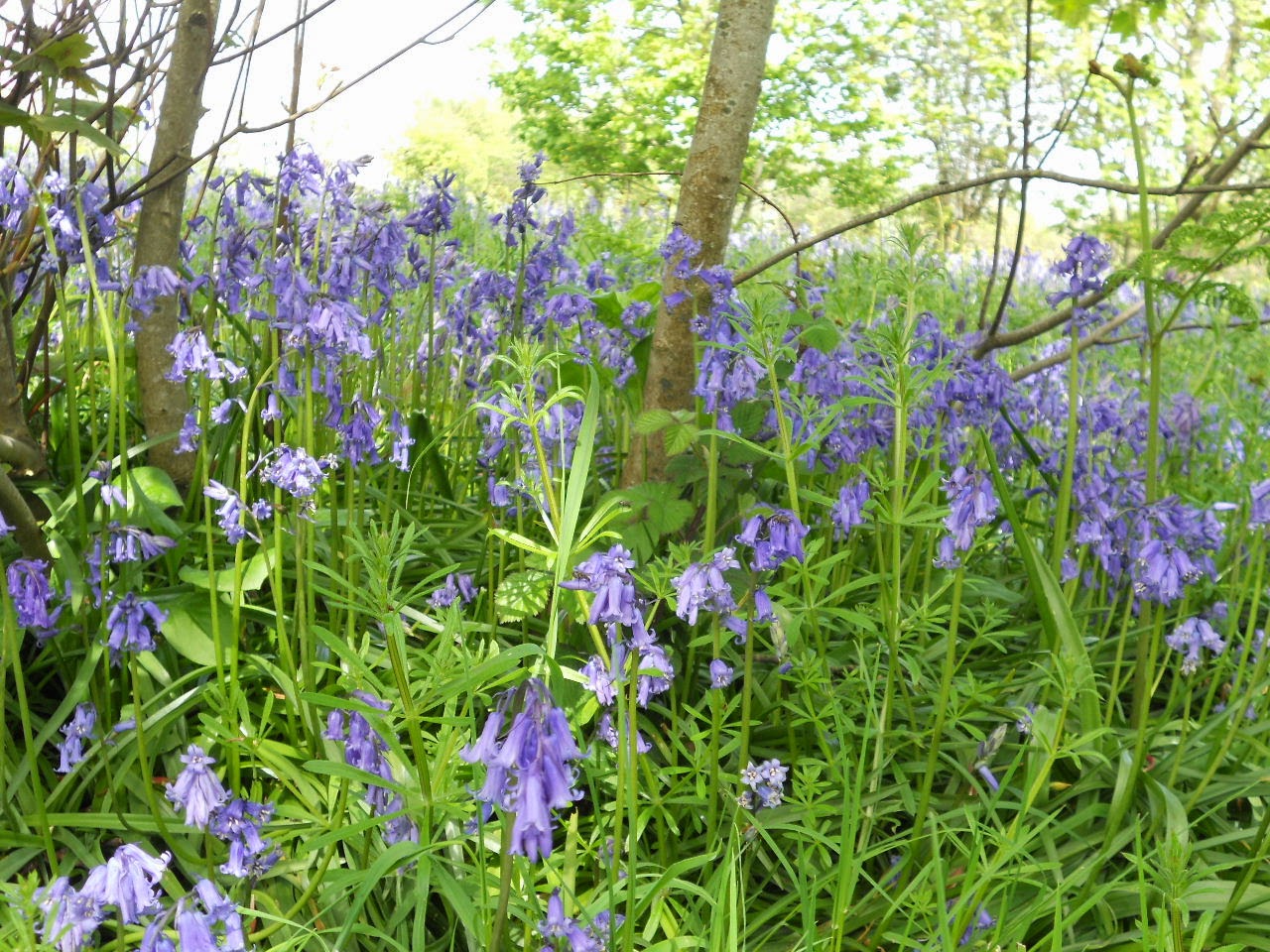 They were of course our native bluebells not Spanish ones which are quite different and not this amazing colour see here for more on bluebells and how to tell the difference. 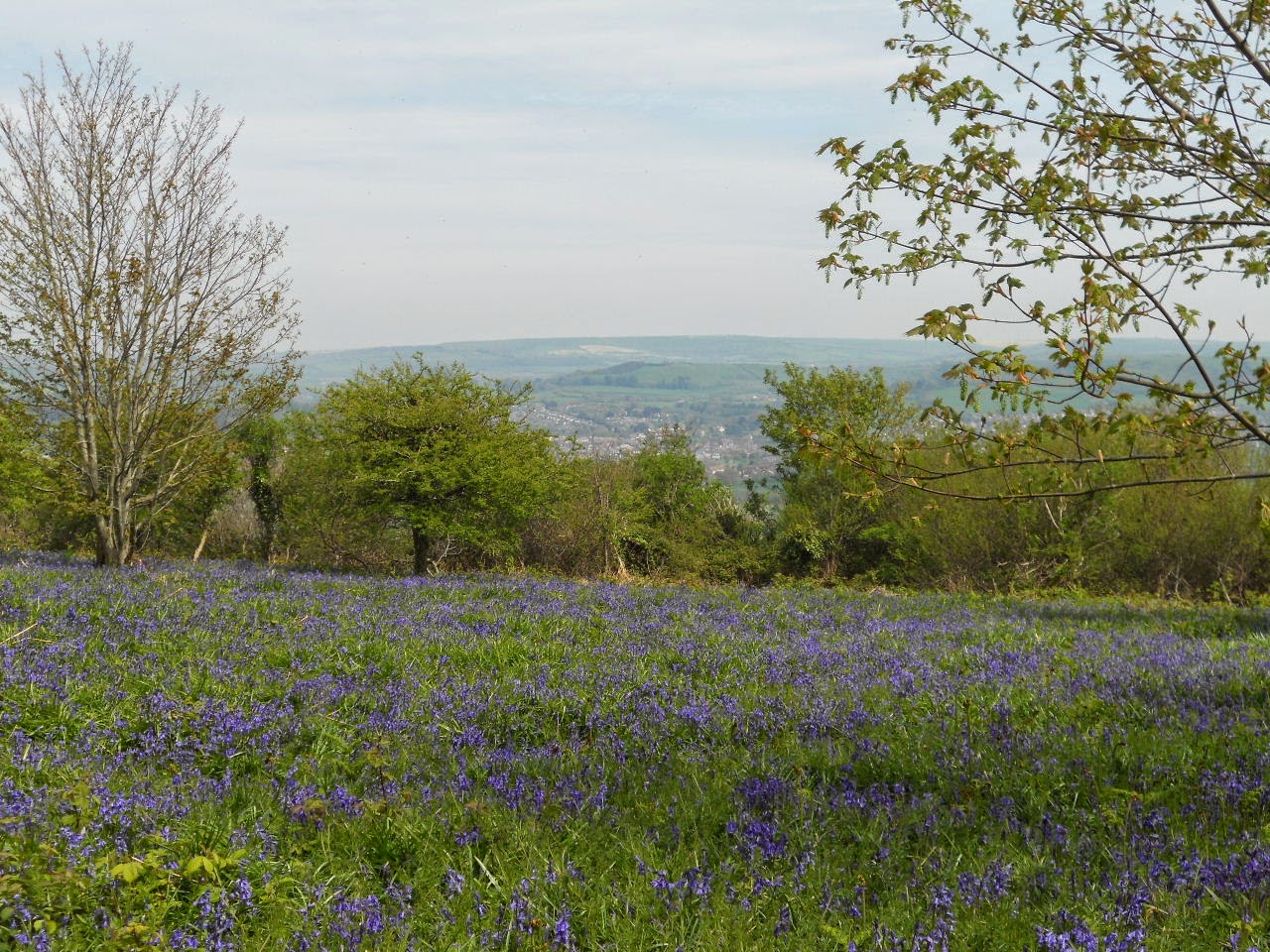 Some were flowering in the open as if they too wanted to enjoy the distant views. 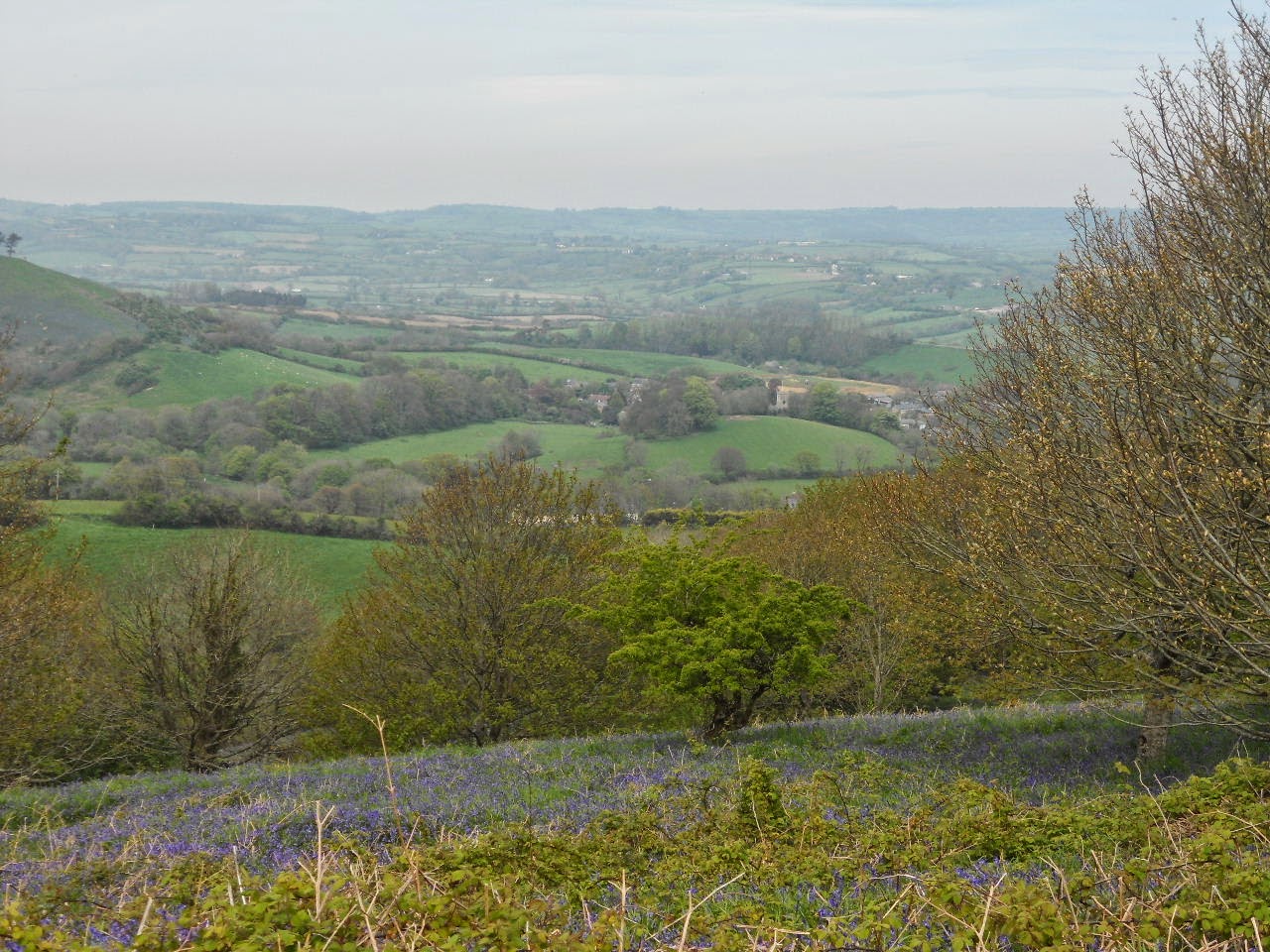 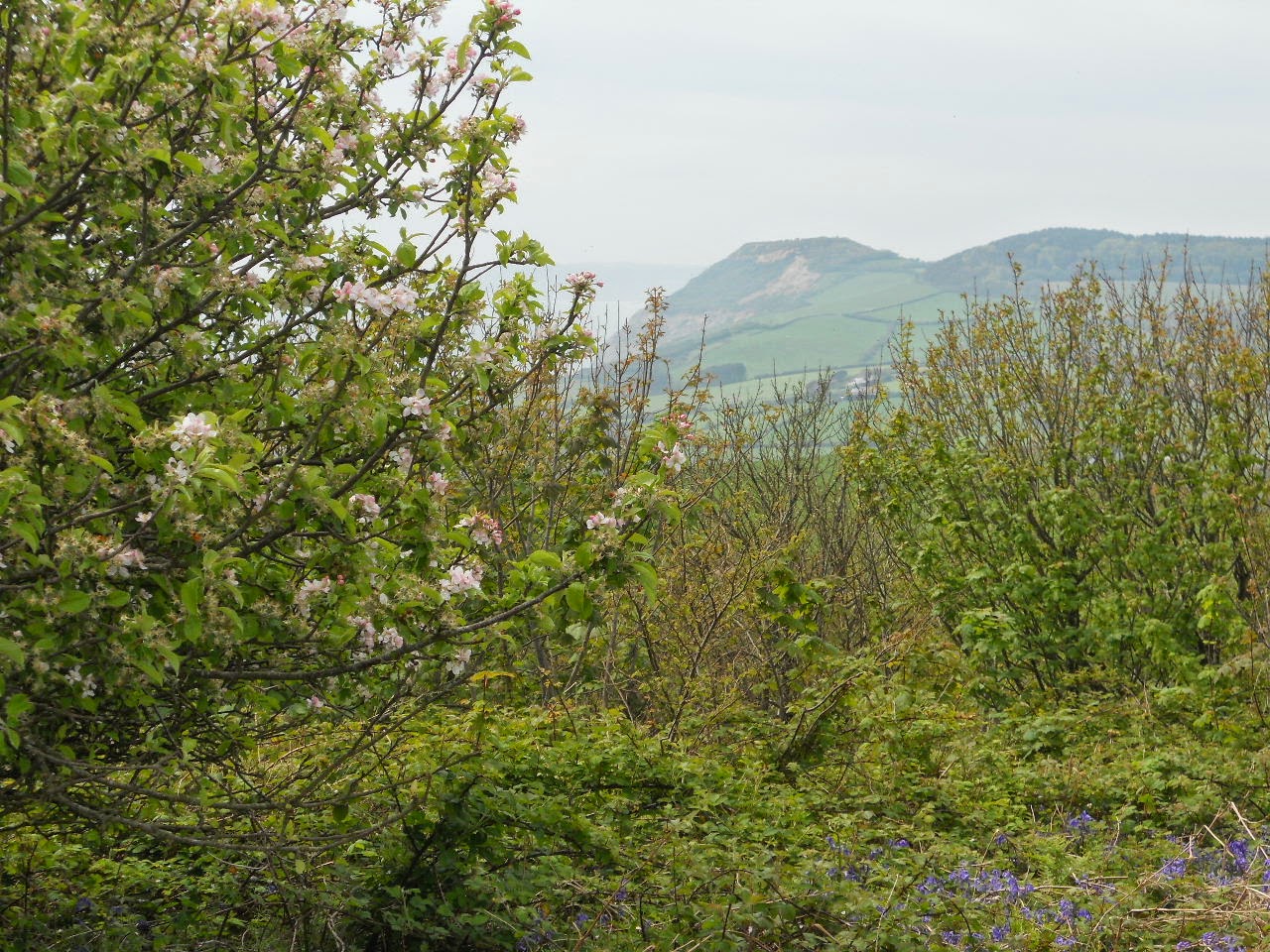 And here and there a crab apple with its lovely blossom - in the distance you can see Golden Cap - not so golden in this picture as the sun wasn't shining on it at that moment - the highest point on the south coast of England. 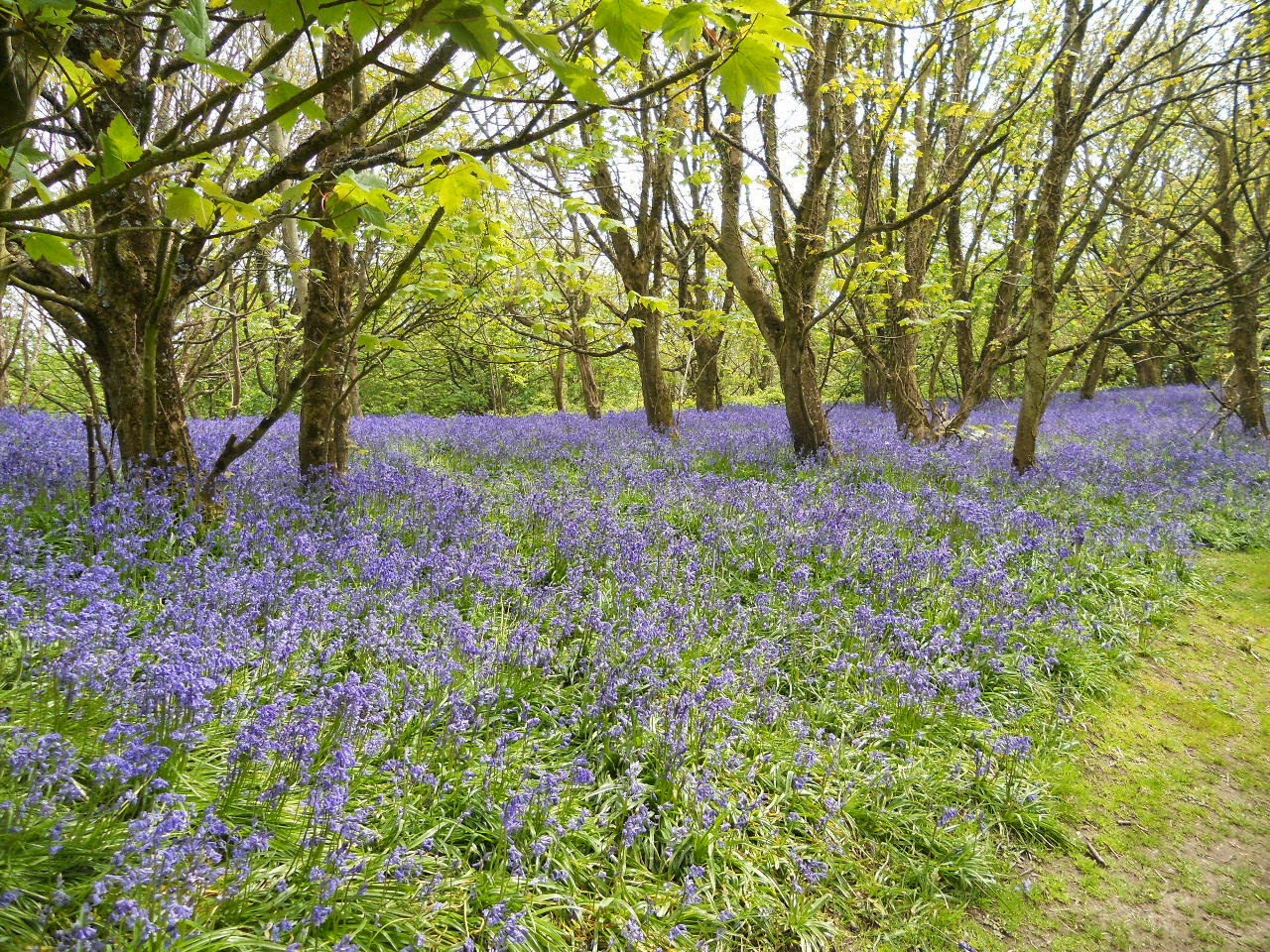 Back into the woodland again and still the ground was carpeted with the bluebells. 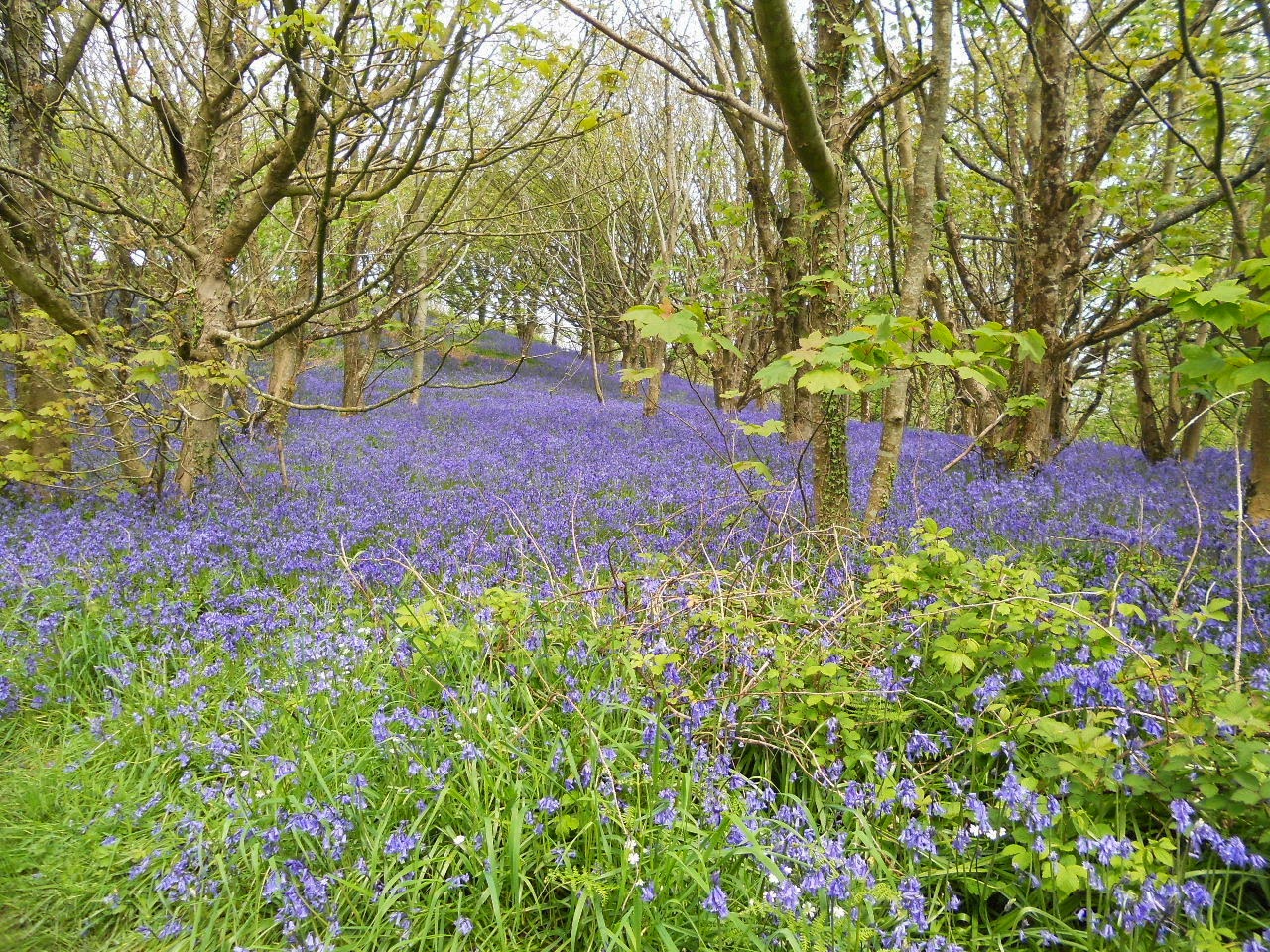 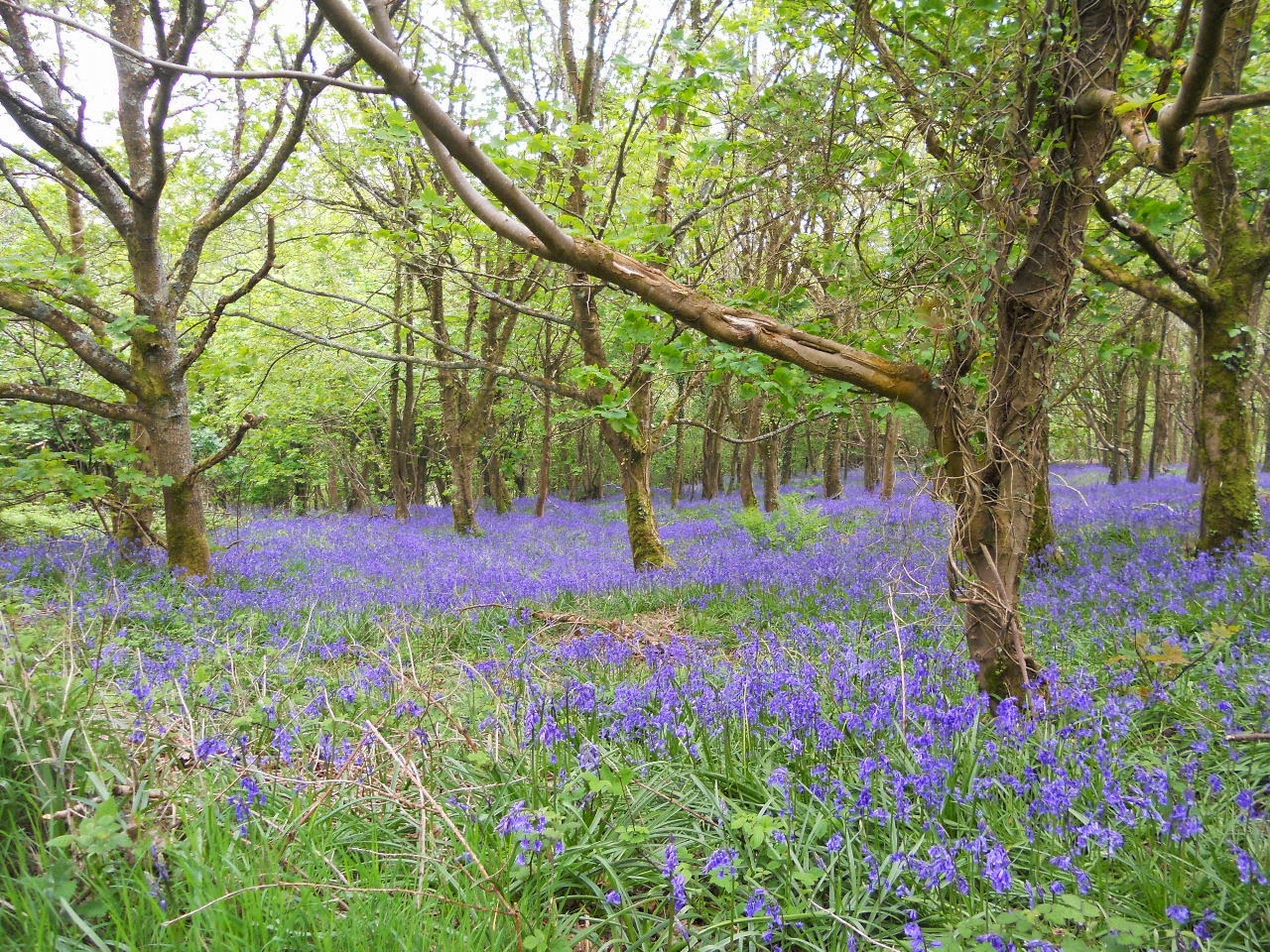 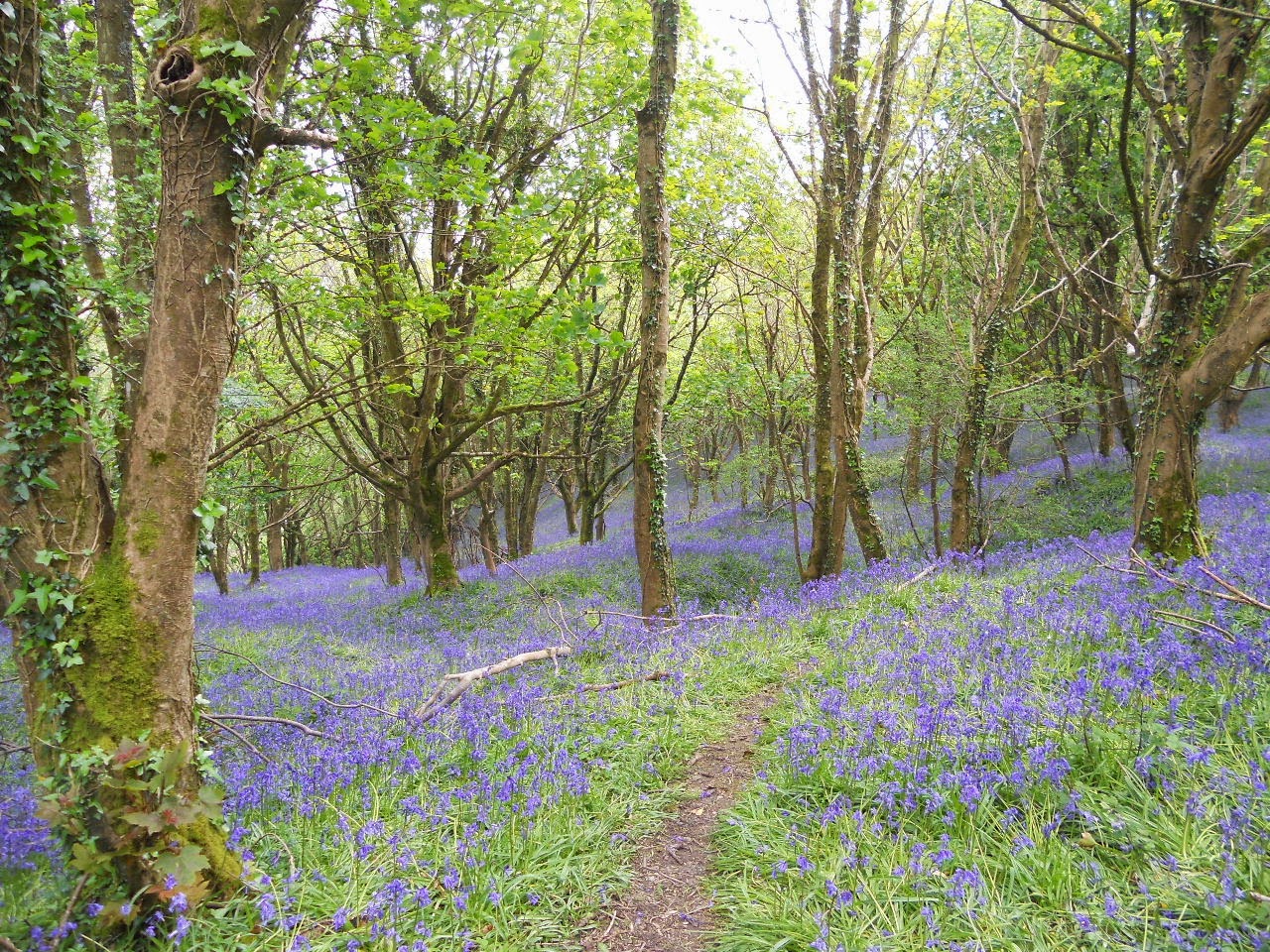 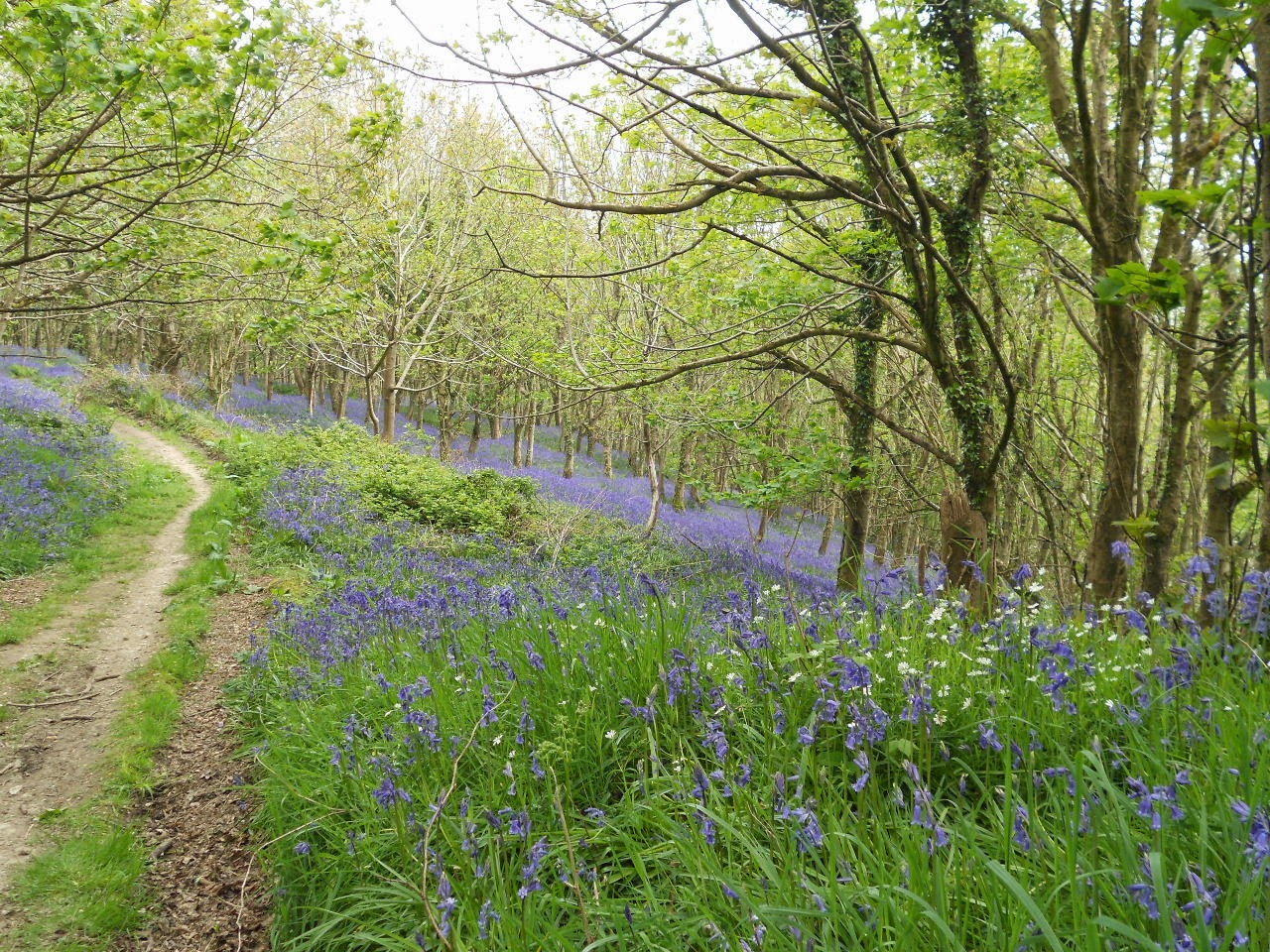 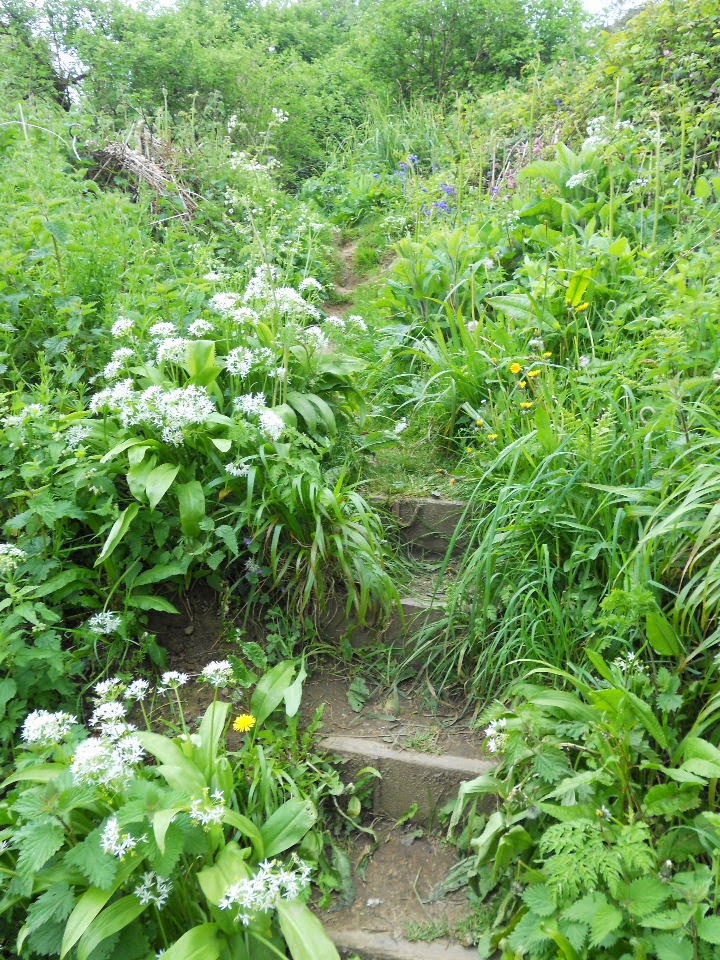 Until eventually we left the woods to come out onto a narrow road which we then followed noticing the number of different wildflowers growing in the verges. 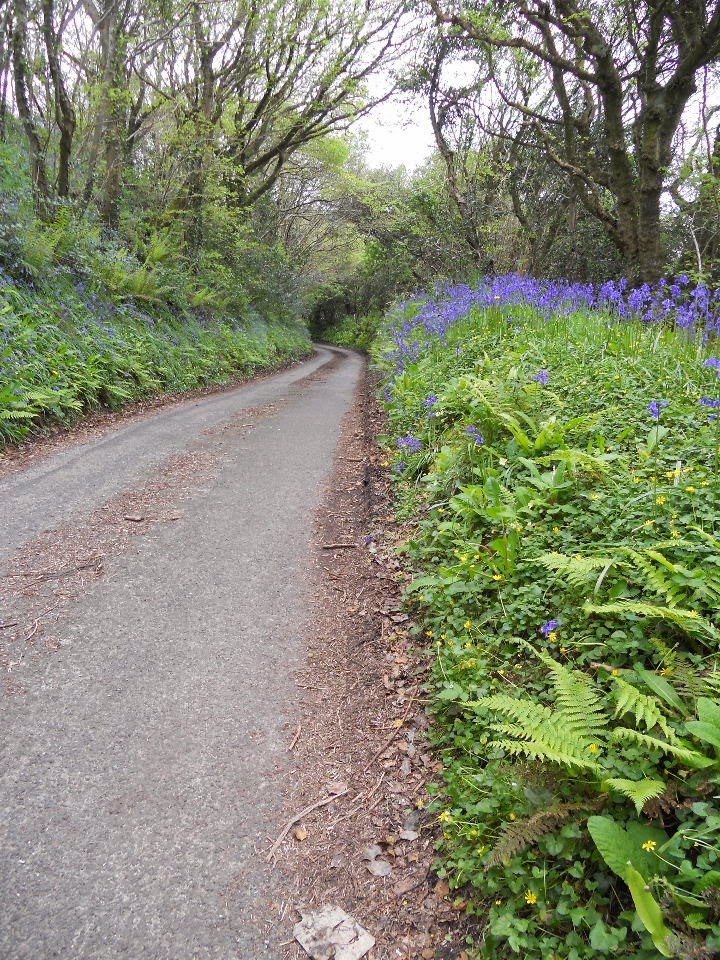 I noticed bluebells, cow parsley, buttercups, primroses, violets, red campion, purple bugle, yellow deadnettle, periwinkle,and celandines to name but a few.  Unless on foot one rarely notices just how many flowers there are alongside a road.  Somewhere however we must have taken a wrong turn and we came out onto a main road which we had to walk along for a while till we were able to get back onto a footpath - not to be recommended on a Bank Holiday Monday or at any other time I dare say!  Scary with no pathway and no verges either! 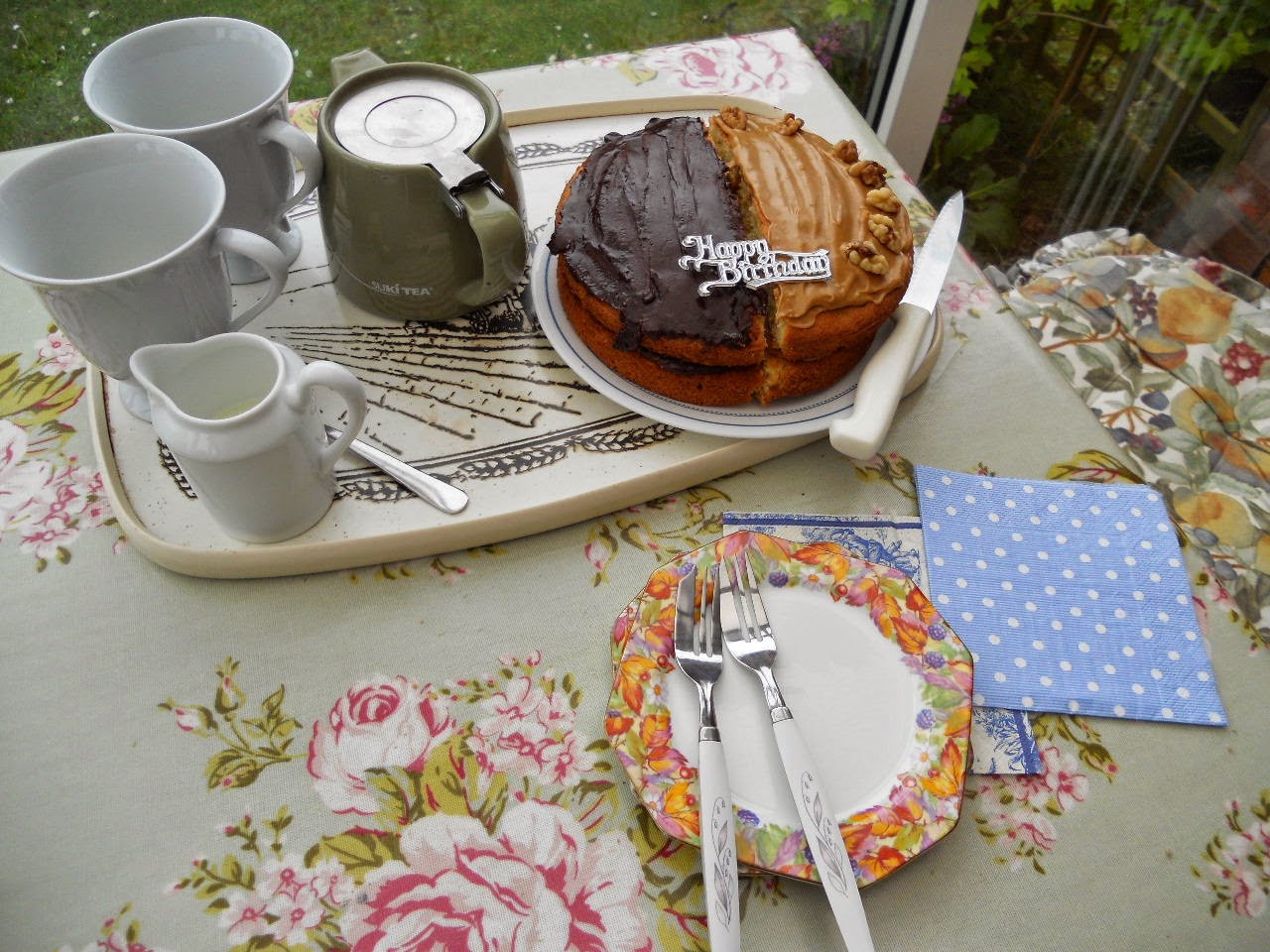 We reached home about 5.00 a little later than I had expected and I hastily set forth to ice the Half and Half cake I had made the previous day.  Half and Half cake since my favourite is coffee walnut sponge which Mr M doesn't care for so I had made up a sponge mixture and put half of the mix in one sponge tin and added walnuts to the remaining half to use in the second tin.  When cooked I cut each one in half to be sandwiched together with coffee icing for my walnut one and chocolate for Mr M's half - I'd never win a prize for my cake decorating skills and certainly not if done at great speed whilst waiting for the kettle to boil! 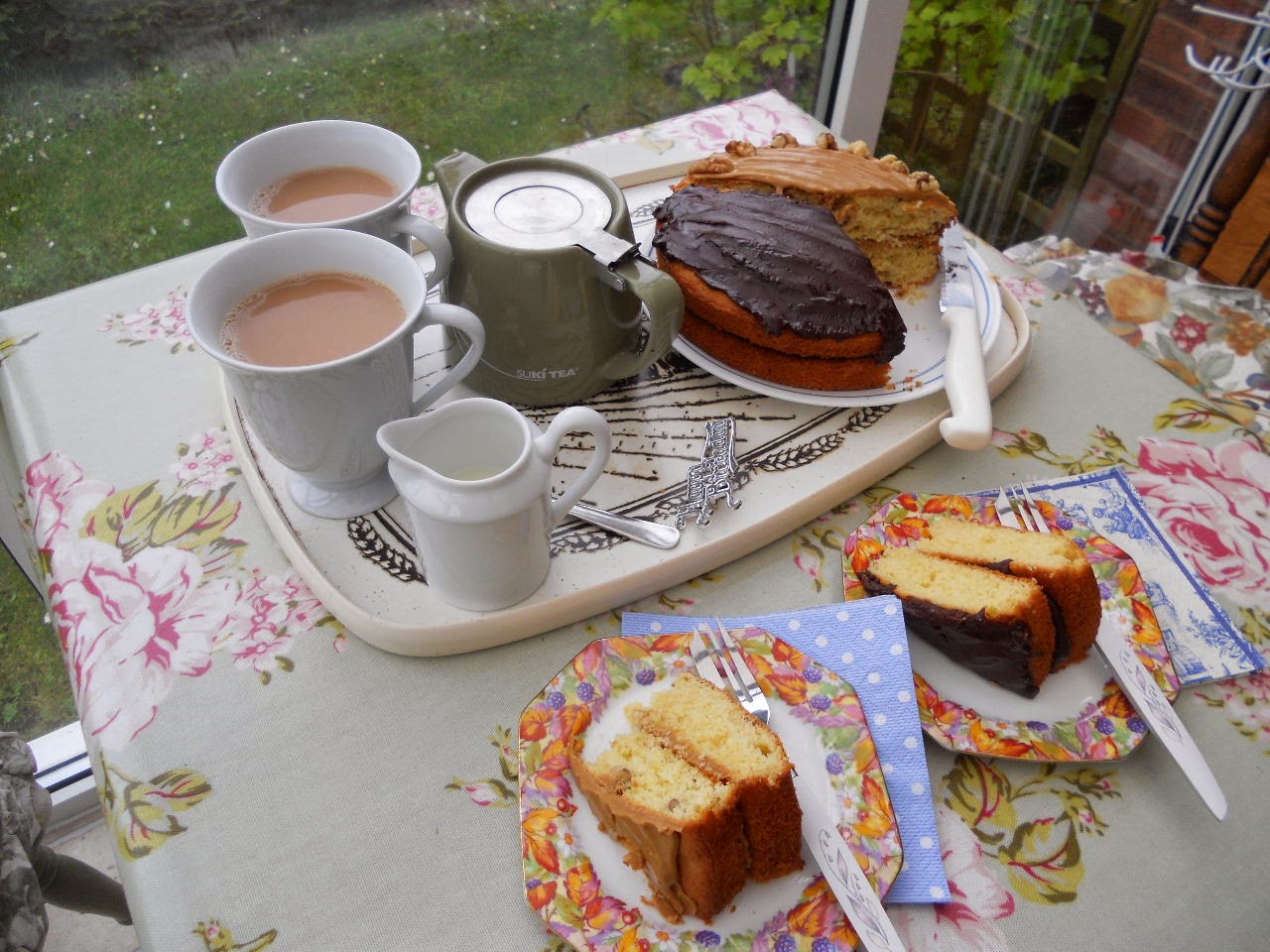 We enjoyed a well earned sit down with our cuppas and a slice of cake each - no candles but a little silver Happy Birthday plaque which I have had for years - no expense spared here when it comes to birthday celebrations!!!

Reaching 70 seemed to me to be more significant than any of the other "Big O" birthdays or even the 21st that had come before - not sure why.  It is definitely not the beginning of the end but bonus time which I intend to use to the full and it is with a positive feeling of new beginnings that I am moving onward and I thought how lucky I am to have reached my three score years and ten and be fit and able to walk for hours, to have my birthday in May the lovliest month of the year, to live in this wonderful part of the country with places like this if not actually on my doorstep then near at hand and to have Mr M who had his 70th years ago fit and well enough to be able to join me on my walks - lucky girl eh?!

Thank you all for your comments on my previous post - I am glad I am not the only one who finds computers a complete mystery!
Posted by Marigold Jam at 14:30 35 comments: