I know some of you like to hear about my outings so perhaps you would like to join me on a recent mini Backpack, Boots and Bus pass trip?

I haven't been on a real BBB Trip for more than 2 years - my how time flies - and truth to tell this wasn't actually a proper BBB trip anyway as I didn't take a backpack as I was only going for the day and I wore shoes not boots and I drove part of the way.

I was home alone as Mr M was away for a couple of days.  I love him dearly but oh how wonderful it is to spend time at home by myself for a change!  Before he retired his job required him to go off here, there or wherever, sometimes for weeks at a time, and I got used to being on my own, or with just the Wanderer for company, and I loved it though of course it was always good to see him home safely again. 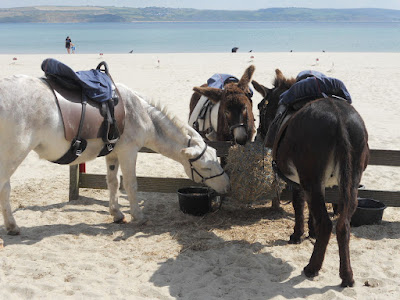 So having only myself to please I decided to have a day out on my own on Monday and thought that a day at the seaside would be good.  I drove to Poundbury where the parking is free, the route goes along a high ridge and the views on both sides are stunning although of course when driving it is as well not to spend too much time admiring them!  The roadsides were beautiful with tall pink spires of rosebay willowherb and pale grasses softly swaying in the breeze and I felt at peace with the world as I made my way to Poundbury where I left the car and with my bus pass at the ready got the bus to Weymouth a journey of about half an hour again through lovely Dorset countryside although as I got chatting to a couple of other passengers in the seat behind I didn't actually pay too much attention to it on the outward journey.  We said goodbye to each other as we left the bus and I made my way along the esplanade towards the harbour.  The donkeys were there on the soft white sand but as the schools don't break up for the holidays till the 21st July there were few customers and they were enjoying pulling at their hay net when I saw them. 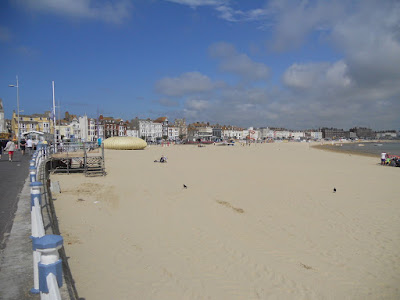 Just look at all that space!  It will be a different story soon when on a day like Monday the beach will be full of holidaymakers!  The sand was clean, pristine and almost white as though all had been made ready for the influx of holiday makers due in a week or so. 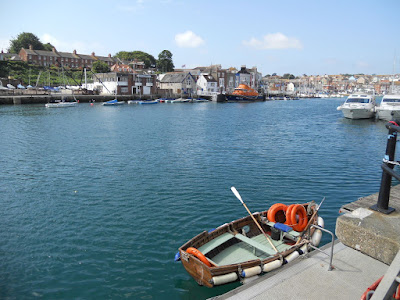 I made my way towards the harbour - this little boat will carry you across the harbour for £1 if you don't want to walk along to the Town Bridge and back along the other side. 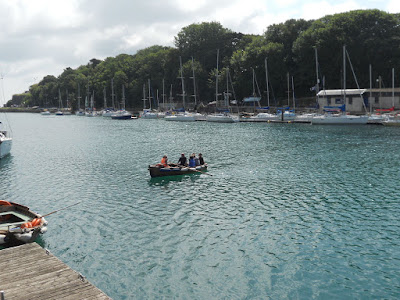 Here is another boat coming from the other side. I didn't avail myself of the ride though and walked round to the area you can see in the above photo. 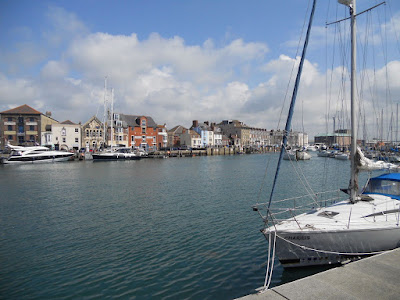 Now on the other side and looking across the harbour to where I had come from. 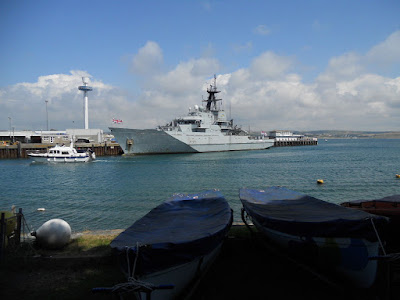 I continued my walk along this side and wondered what the boat I saw in harbour and flying the Union Jack was and since learned that its is apparently HMS Severn named after the River Severn and one of several ships named HMS Severn the first being launched in 1695.  This current one is a patrol vessel. 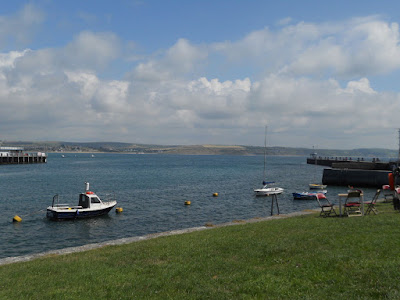 I continued along this side where it becomes less built up and as you can see greener. 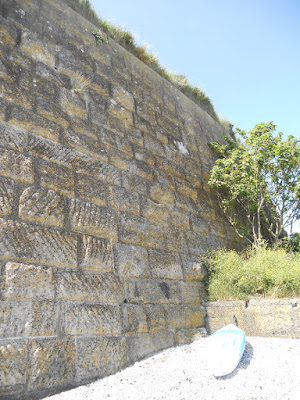 Until I reached what is called the Nothe and this wall is part of the fort built here over a hundred years ago.  Click here for more info on the Fort and an aerial photo from which you will see my route along both sides of the harbour and round the wall on to a tiny pebble beach and some rocks. 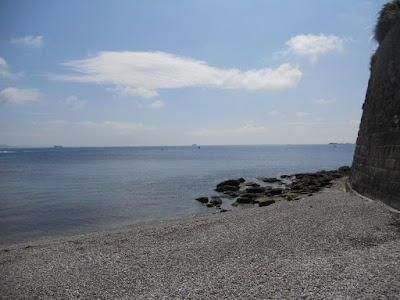 The tide was not in at this time, although from the seaweed on the rocks it would obviously come further in in due course, and so I made my way over some of the rocks round to the right to where I could see Portland across the water a nd then came back closer to the little beach, as I didn't want to get trapped if/when the tide came in, and found a warm flat rock against the wall on which I could sit and eat my lunch. 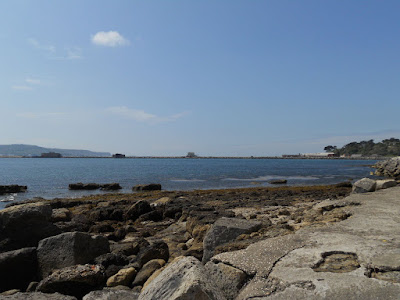 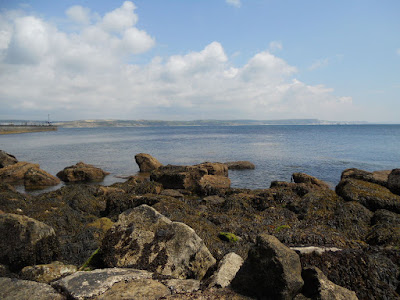 It was so incredibly peaceful I had the area to myself apart from the many swallows which swooped and shrieked as they flew in seach of their lunch too.  I think they had nests in the upper part of the wall but  they are so fast I couldn't actually see for sure. 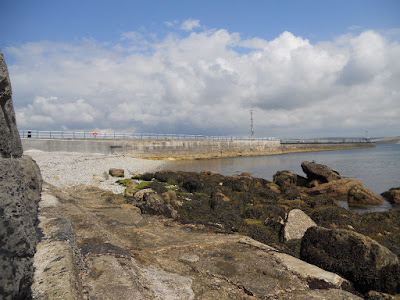 Sat here on the dry blocks with my back against the warm stones  of the old wall and felt that all was well in the world - even if only for a while! 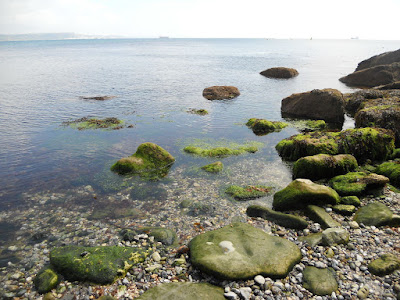 Having sat peacefully and mindfully breathing in the quiet, just the sound of the water gently slapping round the rocks along with the swallows high pitched cries, and truly being in the moment whilst eating my sandwich lunch and enjoying the view for a while I decided to make my way back into town so retraced my steps back round the harbour and along the esplanade to the bus stop. 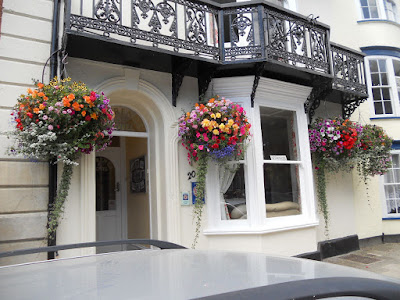 One of the hotels on my way back to the town and the bus stop - lovely flowers and a sign saying No Vacancies so obviously fully booked for the moment - it certainly did look nice. 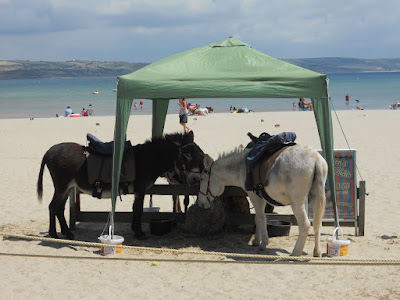 The donkeys on the beach now had a little gazebo to provide shade but still no customers! 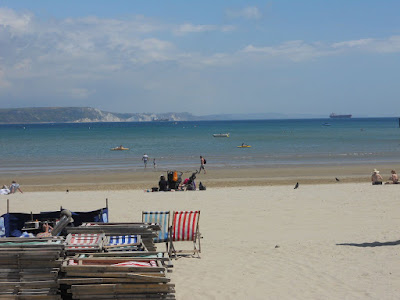 A few more people now that it was afternoon but still not many.  I loved the way the pale sand gradually changed to a darker shade where it was damp and the water was a pale blue gradually becoming darker turquoise and finally indigo as it reached the horizon.   Amazing and an inspiration for a textile weaving/knitting/fabric or something perhaps.

I crossed the road and the bus was in and ready to leave to take me to Dorchester where I got off to do a few errands prior to continuing on to Poundbury and the garden centre there where I had a cup of tea in the excellent cafe and got some bird food in the garden shop for the wild birds we feed each morning.  Then home getting in about 4.00 after having had a lovely relaxing day all to myself doing just as I pleased!

Next Monday I will once again be in Dorchester though not for such a pleasant outing as I am due to have an injection in my eye since the second pterygium I had removed is recurring and it is hoped the injection might prevent the cells continuing to grow.  I haven't asked what happens if it doesn't work!!
Posted by Marigold Jam at 17:49 18 comments: