An outing with a difference

Can it really be more than 18 months since I last posted on here?  I have missed you all and several times I have thought of returning to blogging but always I felt that I had nothing different to say.  Those months I have been away have been filled with the minutiae of daily life as a pensioner when everthing takes longer than it used to and there have been hospital appointments, visits to A&E and follow on appointments, X-rays, physiotherapy, dermatology I began to wonder if I might get a Blue Peter badge for visiting the most number of NHS departments in a given time ....... none of it life threatening but as my eye consultant used to say "age related m'dear"!!

However that is not why I am here now but because I wanted to tell you about an outing last week that was a bit different to my usual.

Mr M and I went to Exeter on Friday, by train as usual, and the scenery en route was as always stunning in the sunshine and although there were signs of autumn, rosehips and hawthorn berries and a few coloured leaves, it still looked and felt like summer.  The train was full by the time we got to Exeter with standing room only as at each stop more people going to the Climate Strike got on with their placards.  We had planned to spend some time wandering about and I wanted to go to a wool shop I'd heard about and to have Mr M's postponed birthday lunch (after the restauant in Weymouth that we had planned to visit on his birthday a couple of weeks ago had been closed at lunchtime and the place we went to instead not up to much) but when I had discovered earlier in the week that there was to be a Climate strike on Friday I said I'd like to join in even if only for a short while and to stand and be counted which Mr M wasn't up for so we split up and arranged to meet later and go for lunch. 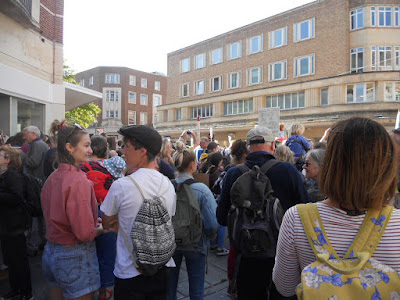 It was amazing to be part of the 2000 or so protestors and the atmosphere was great with people of all ages including a few children, babies in arms and pushchairs, teens, dogs (a few) and  even some people in wheelchairs coming together with one thing in common - their love of the Earth.  I have always said that nothing would entice me to be part of a big crowd but the fate of our planet seemed worth it and I kept to the edges to start with!  I overheard several other protestors saying that this was the first time they'd ever done anything like joining a mass protest so I knew I wasn't the only newbie and I made a new friend when I stopped to speak with a lady about my age carrying a "placard" saying "You know you have to sort it out when Granny shouts about it"!  She too had been drawn to come to Exeter to join in and be counted.  We stood chatting for a while and we both left the gathering just before they all set off to march to the County Hall as neither of us was up to the walk. Does this mean we are now activists I wonder?

We went for a coffee together and I telephoned Mr M to say where we were and he joined us.  We have exchanged e-mail addresses and hope to keep in touch.  It was amazing yesterday morning when looking at the headlines in most of the papers to be able to say "I was there and part of it"!! 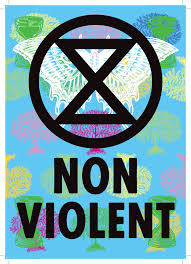 I had been to a coffee morning the previous Saturday to find out more about Extinction Rebellion thinking that if Greta Thunberg a 16 year old was prepared to travel across the Atlantic in a small racing yacht to speak at the UN then the least I could do was to find out more about Extinction Rebellion and maybe do something instead of talking about it.  It all seemed so very well organised that I felt drawn to join up attracted by the Non Violent aspect of it and the fact that so many people of every stripe and persuasion can come together and there be no outbreaks of damage or destruction but now I am wondering.  Why do I feel I don't want to admit to being part of it all when speaking to friends, will the gilets jaunes  or other violent groups infiltrate the peaceful non violent marches as happened here in Paris https://www.bbc.co.uk/news/world-europe-49781640 and is this the way to achieve the aim of getting governments around the world to do something about the things that are making climate change worse?  I have no intention of joining the protest they plan in London 7 - 19 October as I wouldn't be able to get there and if I sat down in the road I might not be able to get up these days but I know now that for every marcher or protestor glued to the road there are dozens more back home acting as support in one way and another and maybe I can do my bit in this way from home.  But life is very difficult at times when it comes to knowing what is the right thing to do.

Mr M got his birthday lunch and very good it was too but there wasn't time to go and find the wool shop this time never mind that can be another day.  The train home was pretty full again with people still clutching their placareds some now a little the worse for wear!!  But I'd had a lovely day and felt really invigorated by it all.