Fun in the woods and a gift 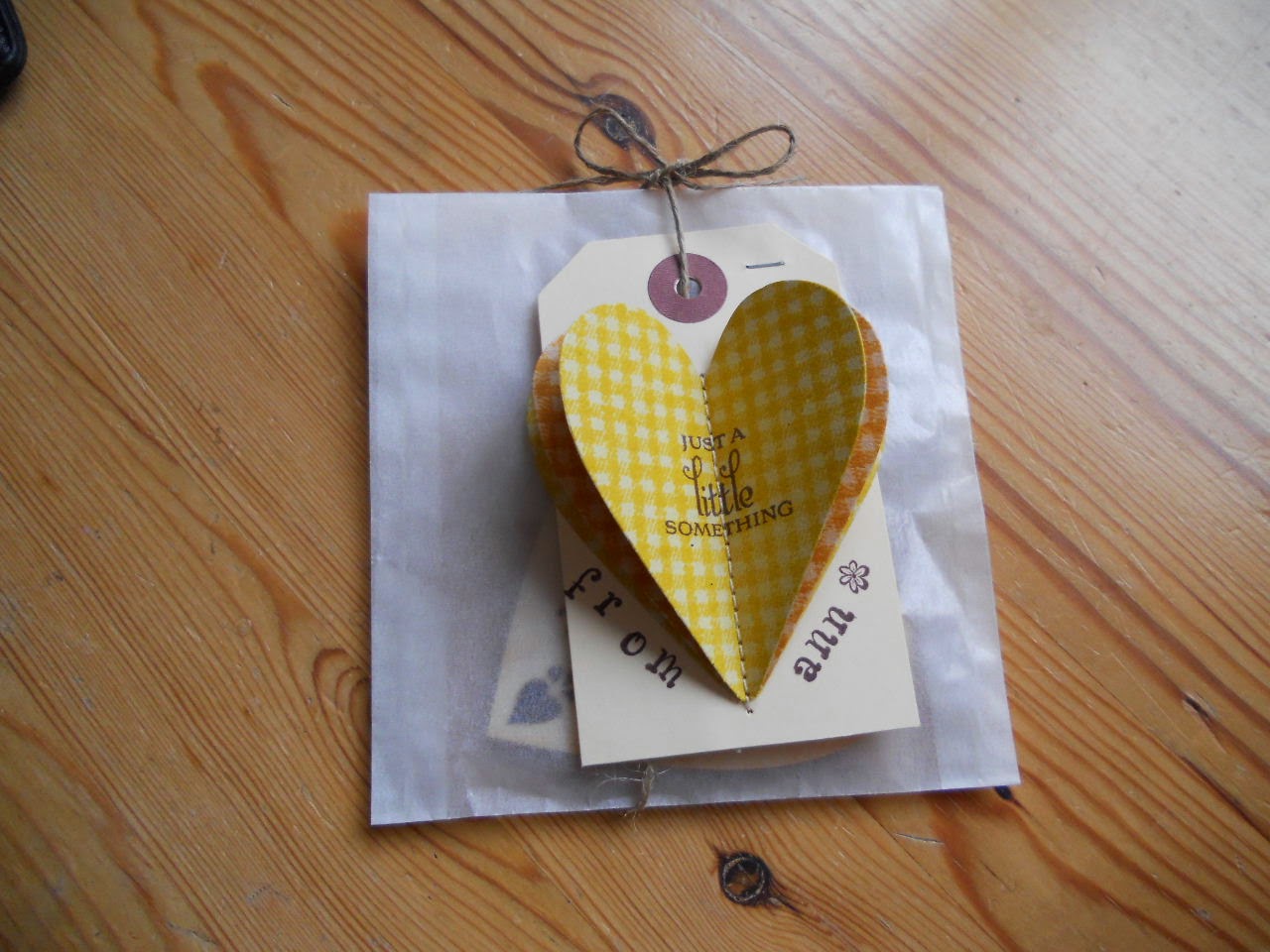 On Valentine's day I received a beautifully packaged little heart gift - no not from Mr M although he did buy me a card - but from Ann who blogs over at Love Making Things and who had a little giveaway recently to all those who commented on a particular post. 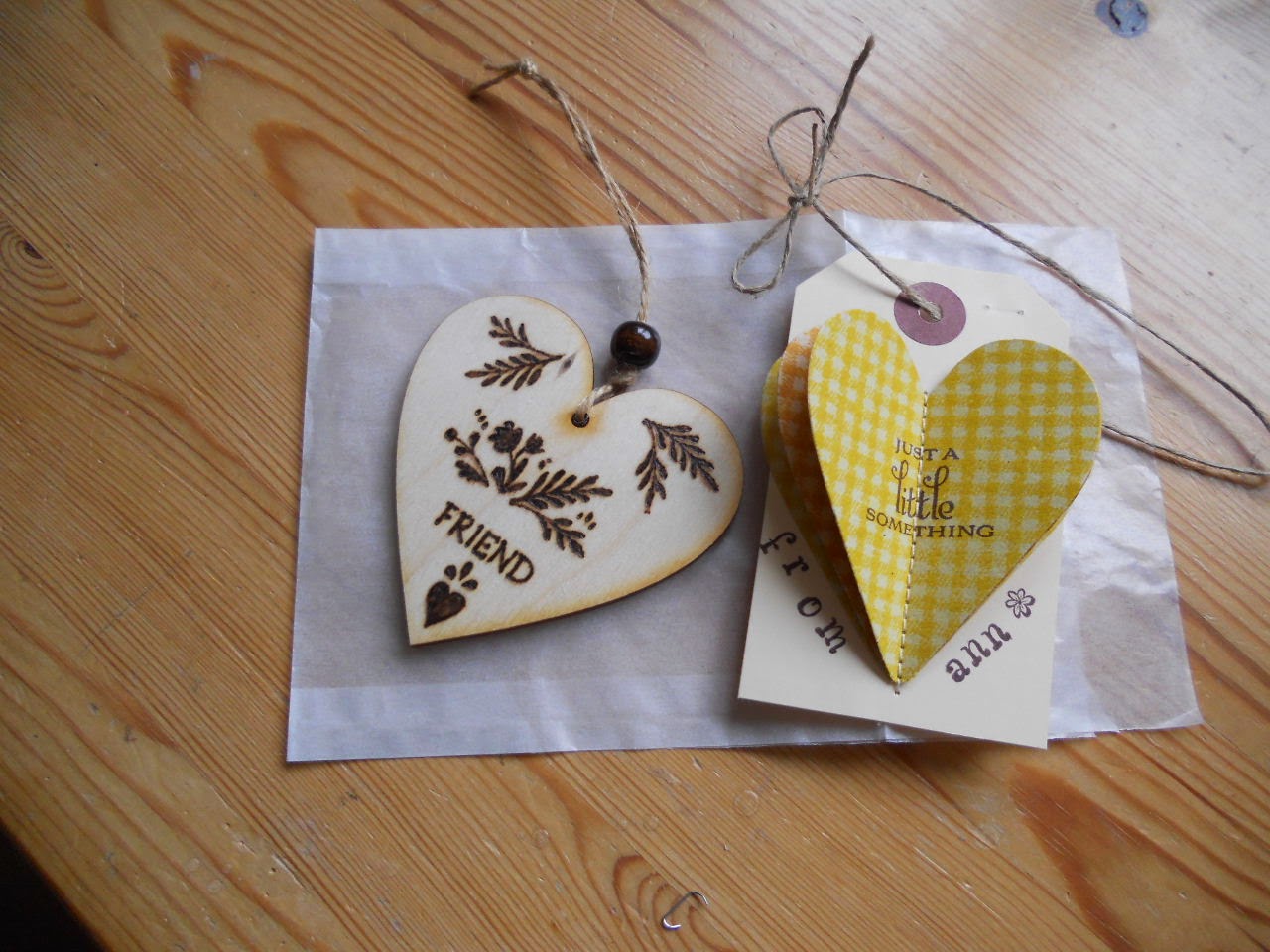 Inside the little package was this dear little wooden heart - isn't it cute?   Thank you so much Ann - a letter is in the post to you. 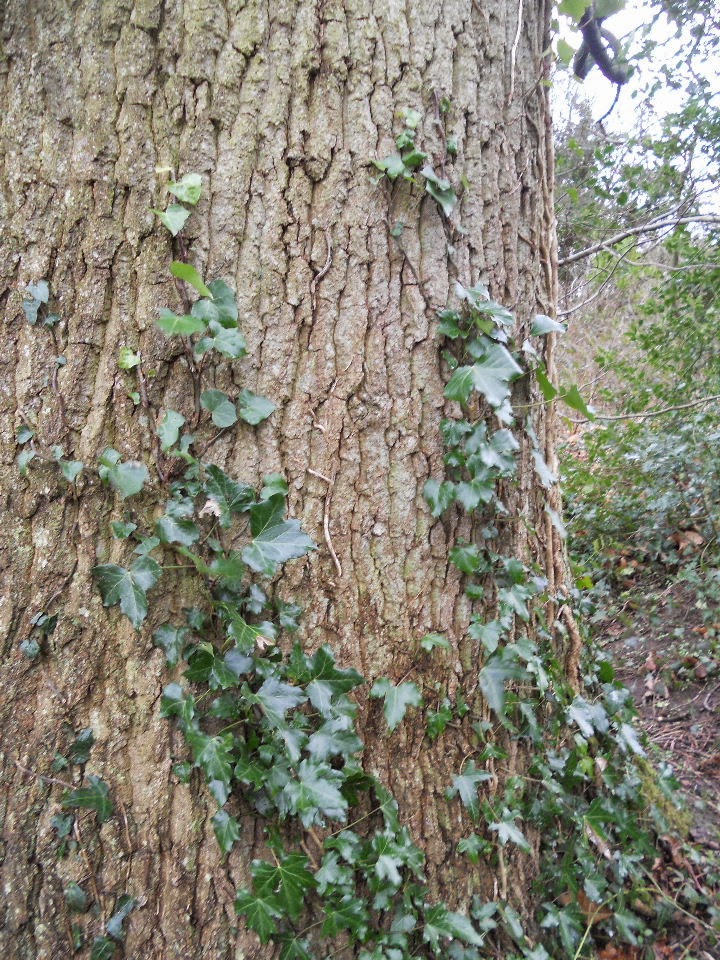 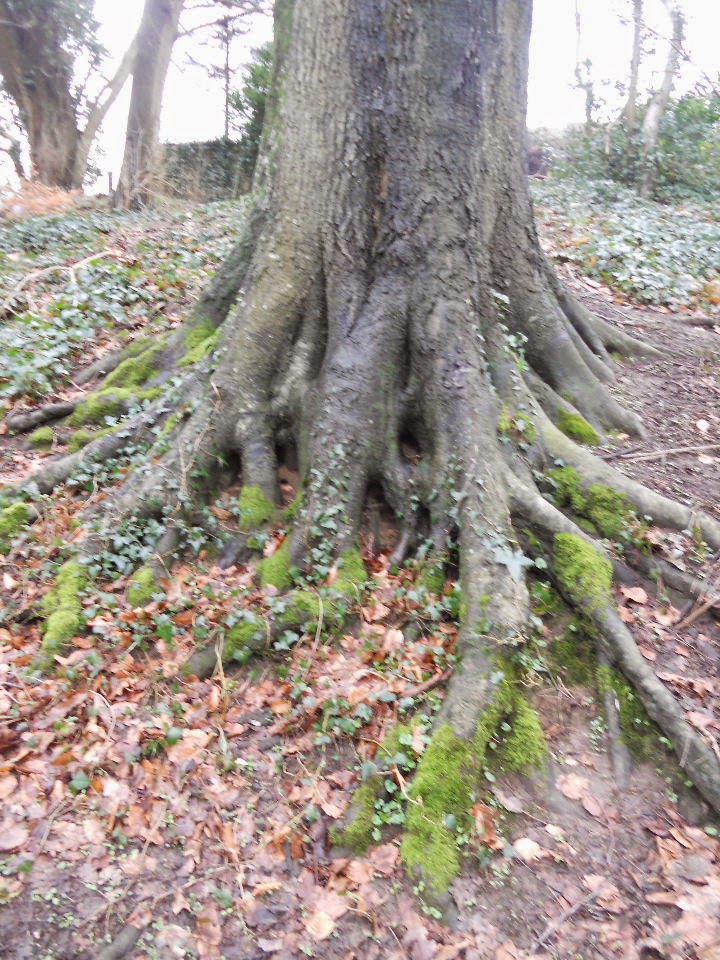 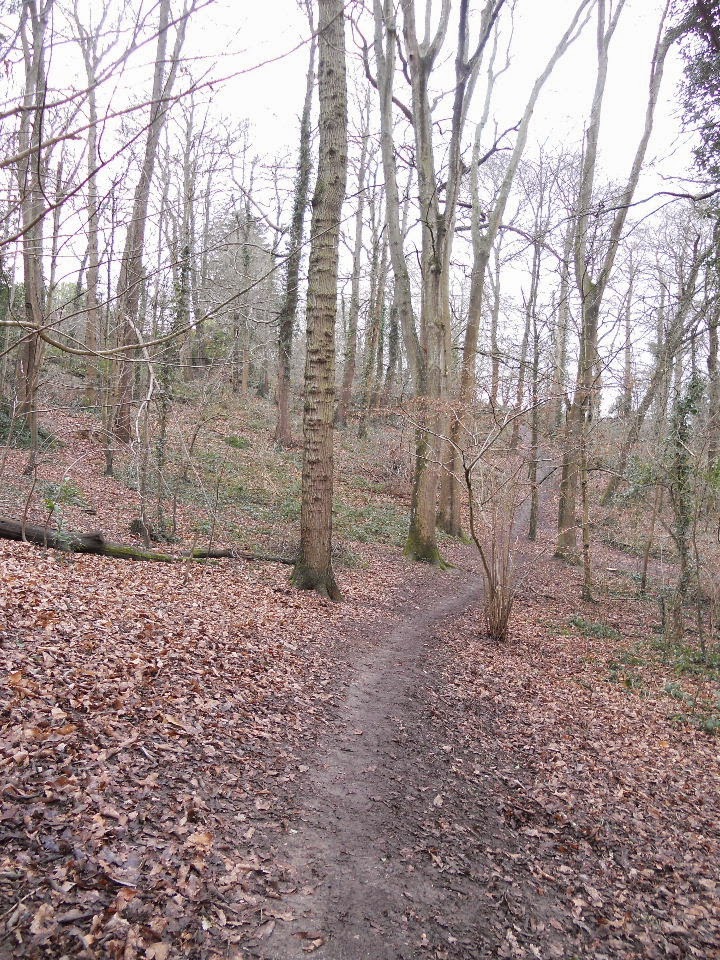 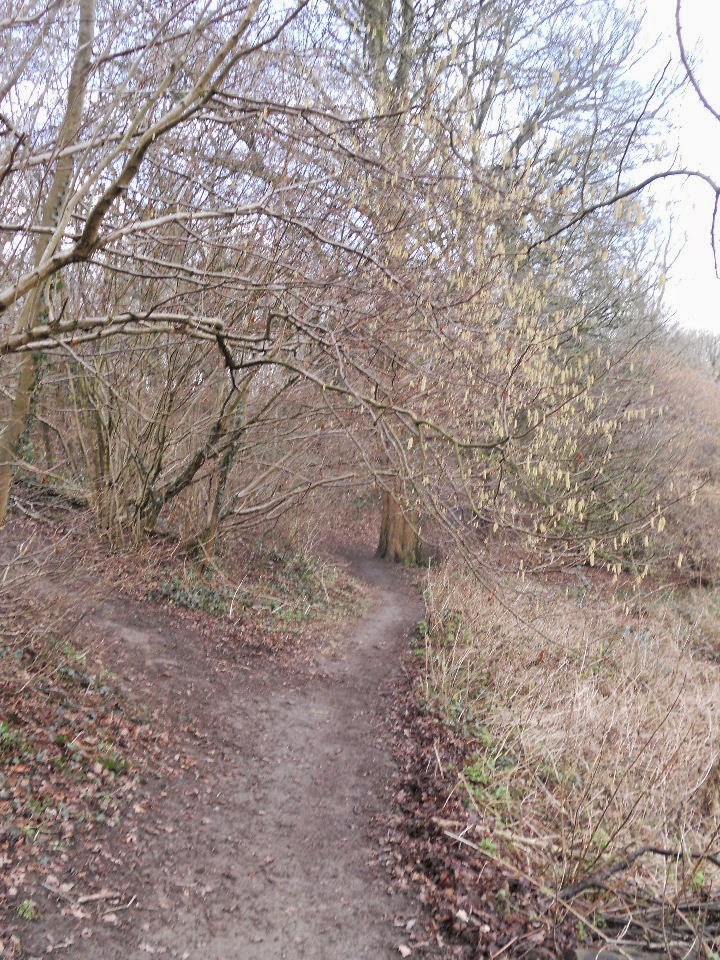 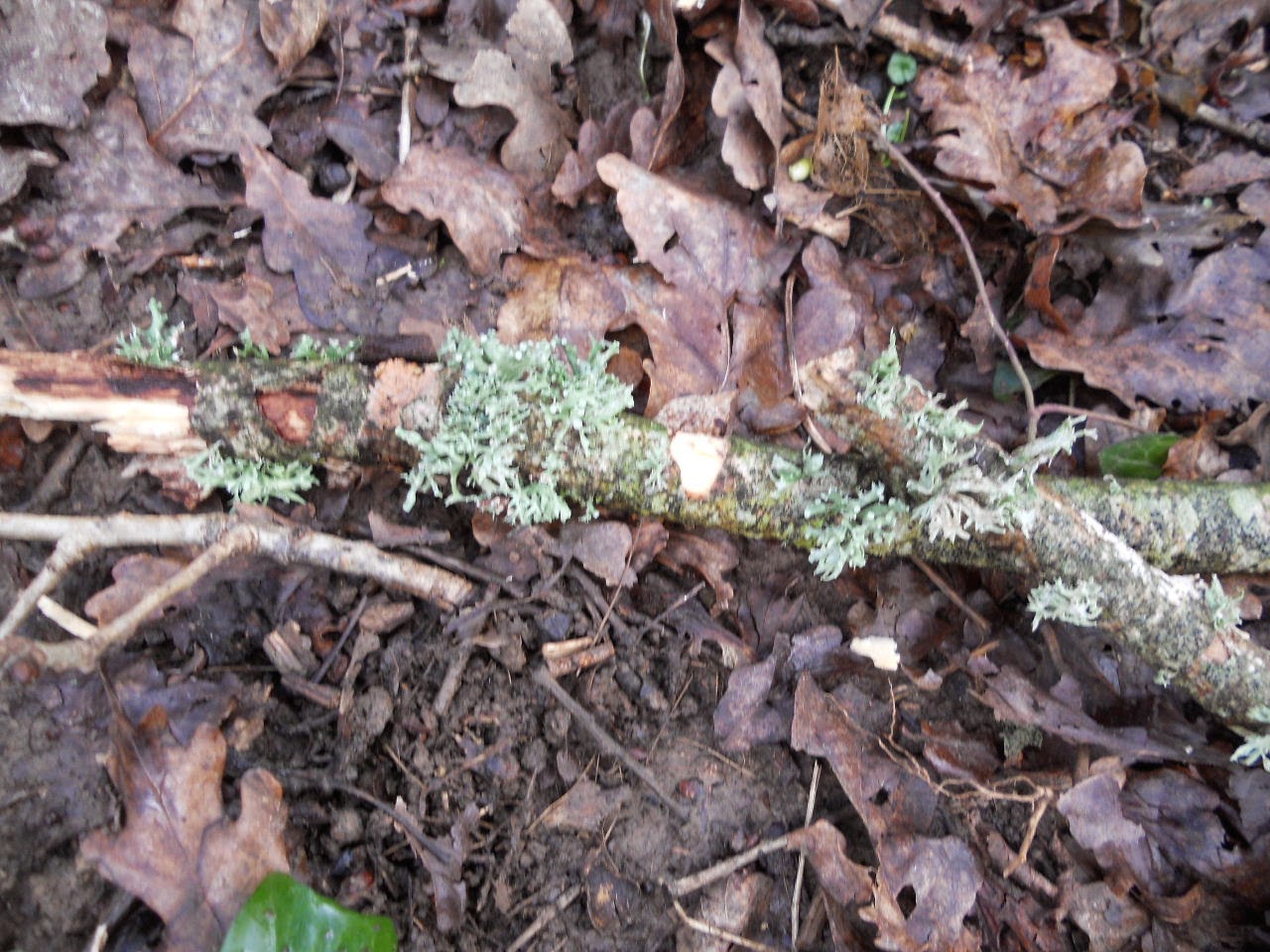 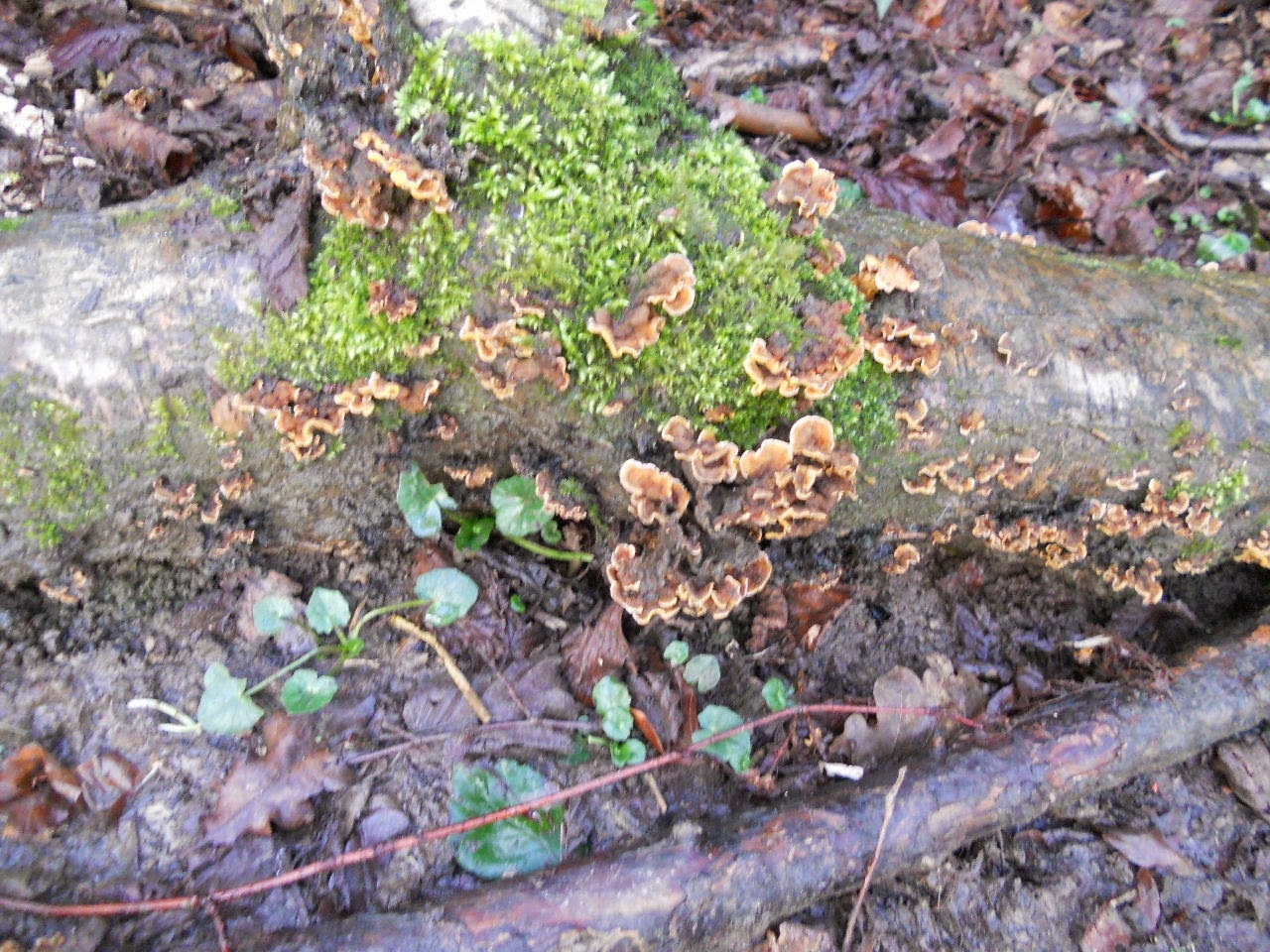 I decided to walk to to the post office to post the letter to Ann, as I also had one to post to Australia and it would need to be weighed, and to take the route through the woods, it had been raining this morning and it was very muddy but it was lovely - I noticed the different barks on the trees and the moss and lichen and what with the birds singing and it not being as cold as of late I really didn't notice how muddy it was at all and didn't want to come home!  On my return I passed a granny (I assumed she was his granny by her age) with her grandson a boy of about 6 and she commented on the mud and she said she thought they probably shouldn't have come to which I replied that it was lovely and worth a bit of mud and she agreed that it made a nice change from staying indoors.  I noticed she was holding the lad's hand and wondered why he wasn't dashing about sliding on the mud and getting filthy as boys of his age should!!  Maybe his mother would not be best pleased if he got his wellies dirty.  I do sometimes wonder if there is a generation growing up with no real contact with the natural world and what a lot they miss out on if so.  It's not just knowing that milk comes from cows but how to make dens in the wood, scooping up mud and making it into pies, playing houses or shop in the roots of the trees and learning to whistle with a blade of grass or how to climb trees ripping one's clothes in the process - or am I remembering my childhood through rose tinted glasses?  There is something about being in touch with Nature that fills a need in many of us I think and I fear for those children growing up indoors and not being allowed or perhaps able to get muddy and to play in the woods as I did this afternoon - no I didn't actually make mud pies nor did I climb any of the trees but in my memory I did!!

Coffee in the garden - yes really! 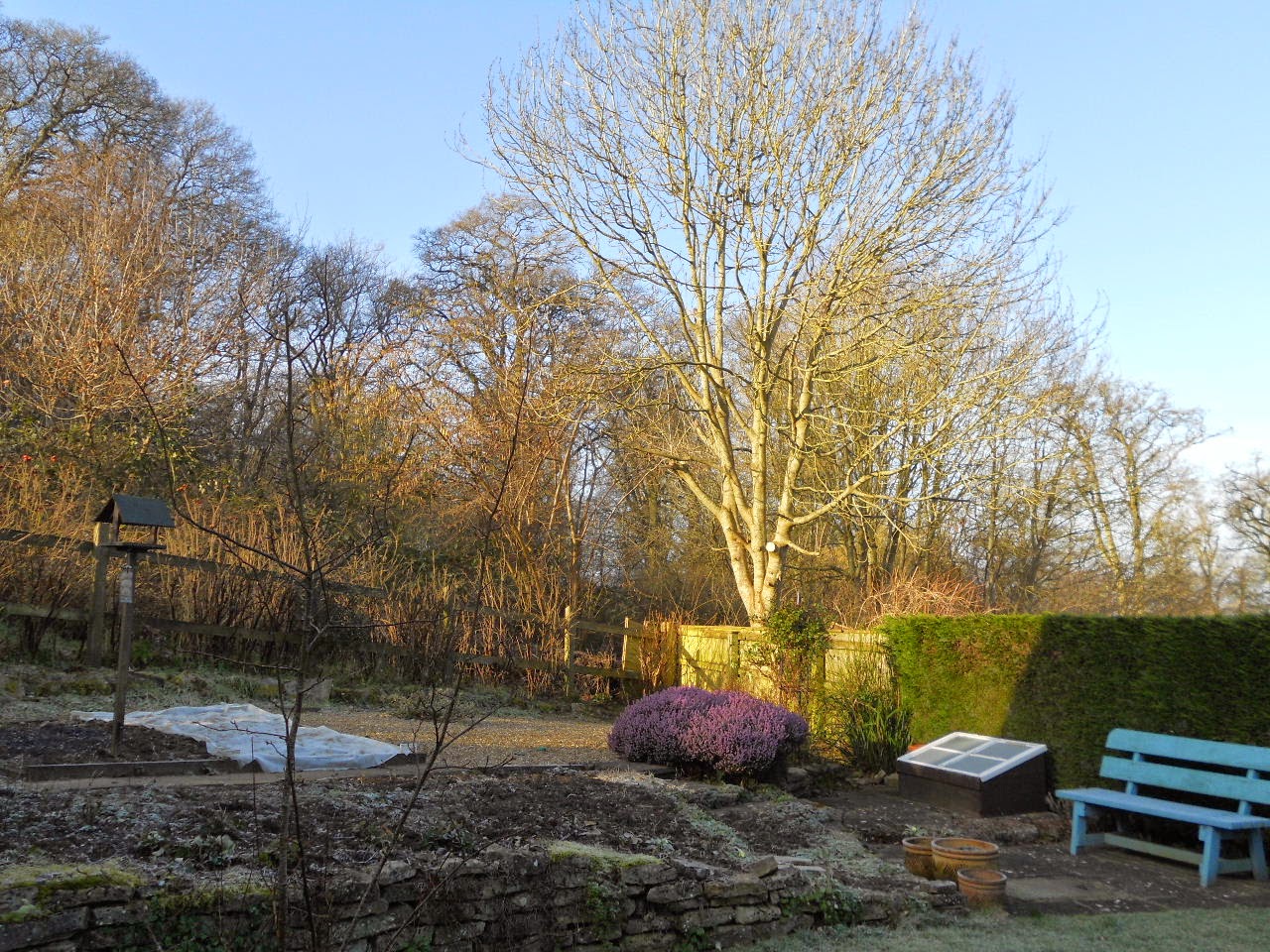 One thing about having double glazed windows and doors is that it cuts out the sounds from outside - sometimes this is a good thing but I love to open the back door when I come down in the mornings just to hear as well as see what is going on outside!  This was the view this morning about 8.30 am - the frost was white but the sun was shining and the sky blue.  We've had some lovely bright days here recently but the north easterly wind has made it bitterly cold but this morning the wind seemed to have dropped and the birds were singing in the wood and all was well with my little world. 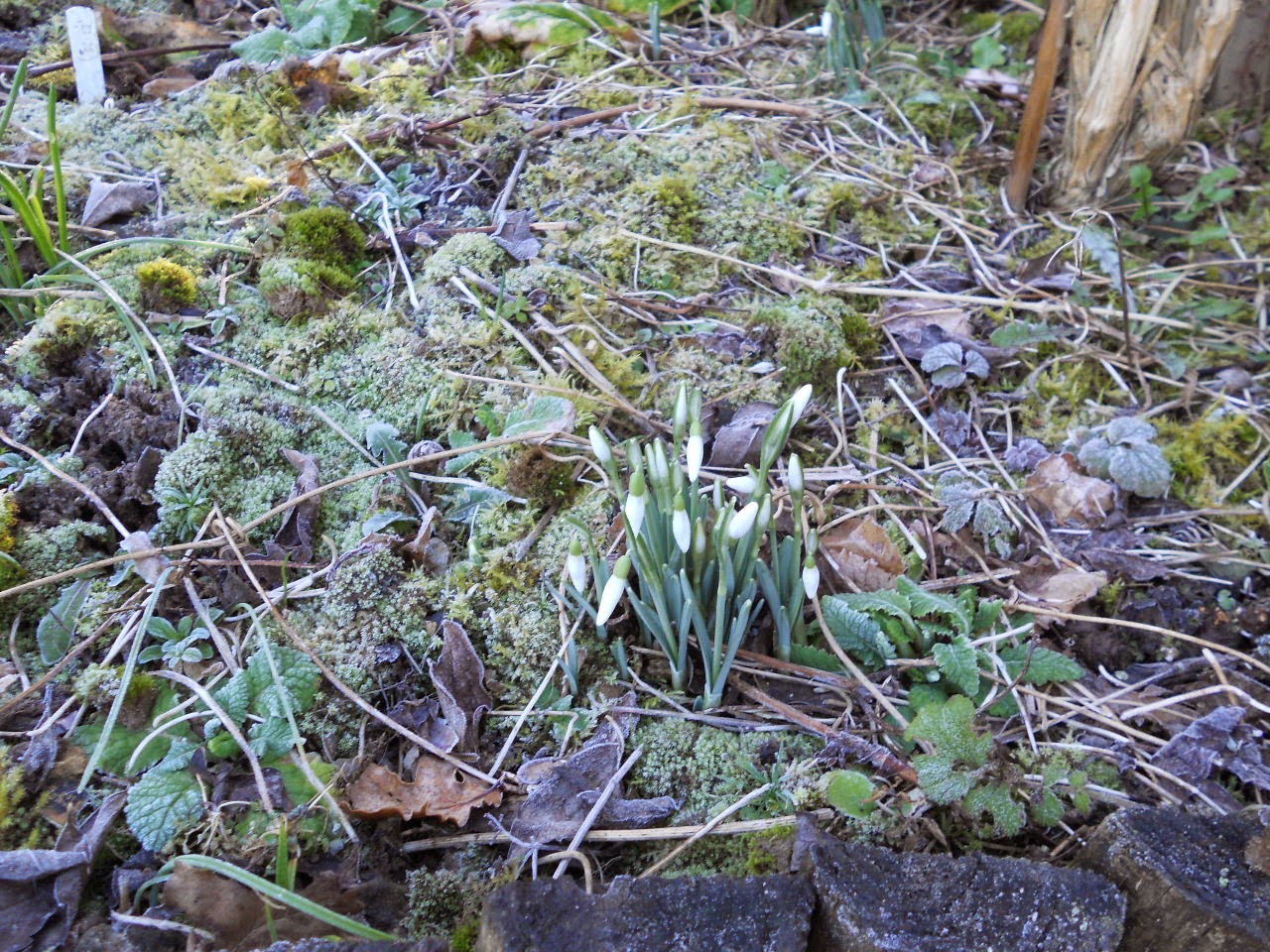 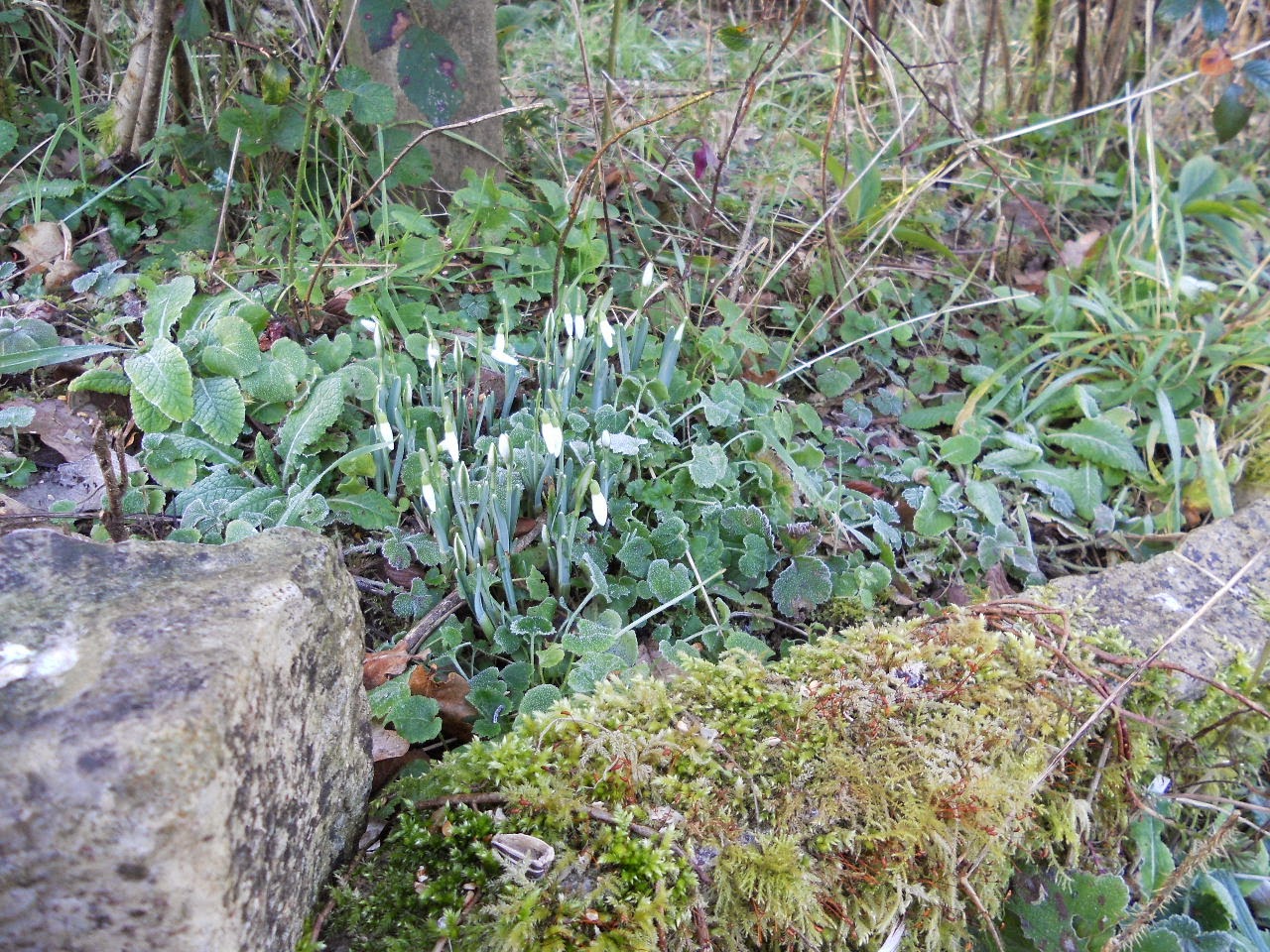 I had a wander round the "estate" and noticed that the snowdrops were almost in flower and there were also a few brave primroses in bloom (and a lot of tidying up needing doing too!) 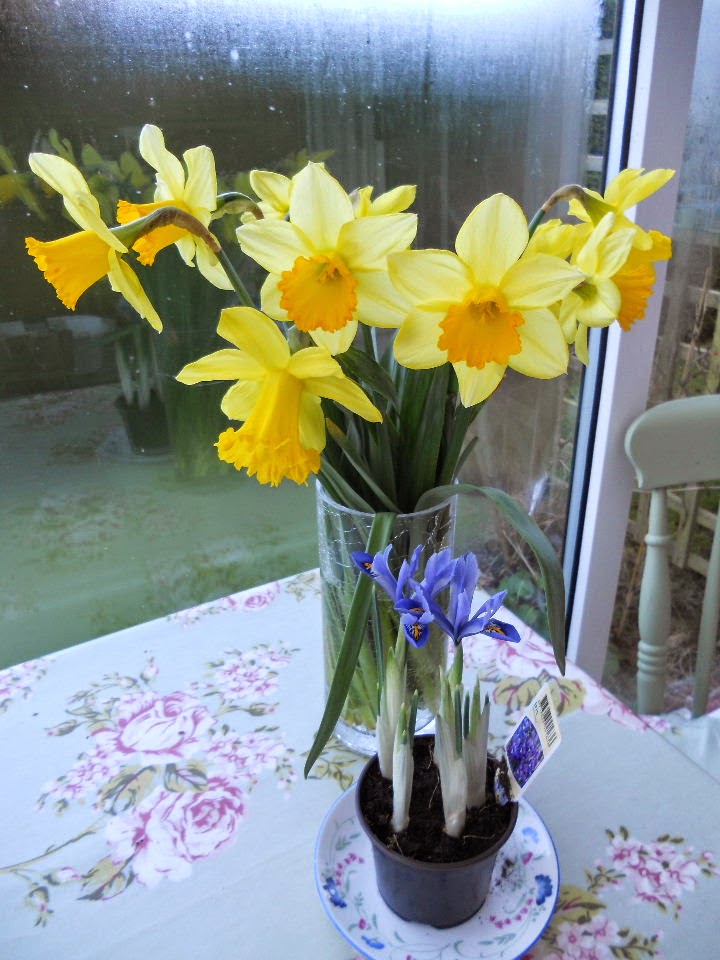 Back indoors the daffodils I had bought at the Trading Post when I did my shopping there over two weeks ago are still looking lovely and fresh out in the unheated conservatory where I put them on the table so I can see them from the living room.  They wouldn't have lasted long in the house in the warm but seem to be happy out here. 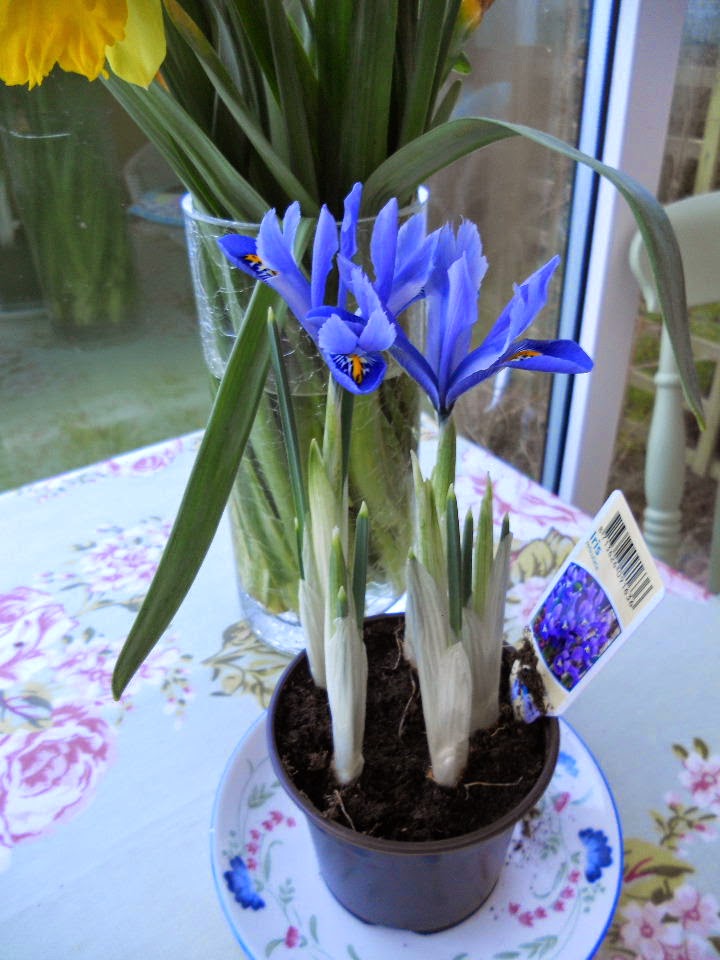 I also bought these little irises from the same place the following week and they too are looking good. 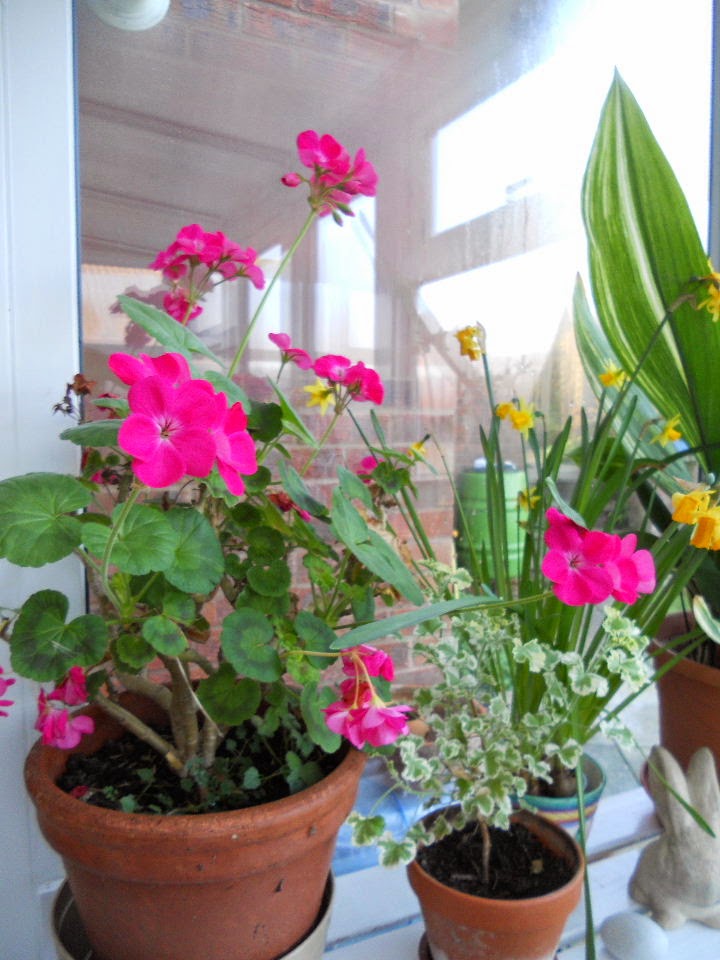 And the geraniums seem to be happy enough even though the temperature is rarely above 7 or 8 degrees in the conservatory and often almost freezing at night - in the summer when the sun is higher I have to move the plants or they would get burned to death but just now there is no danger of that! The daffodils in the background are the remains of a pot of tete a tetes I bought before Christmas which lived out on the table till recently.  Once they have properly died off I will plant them in the garden.  All these flowers gave a real lift to my spirits and made me feel happy.  I am no Pollyanna and can be a miserable as the next person when I get one of my grey blanket periods but it's hard to be "down" when the flowers and birds are sounding and seeming so bright and happy and there is a real feeling of hope and that spring can't be far away now. 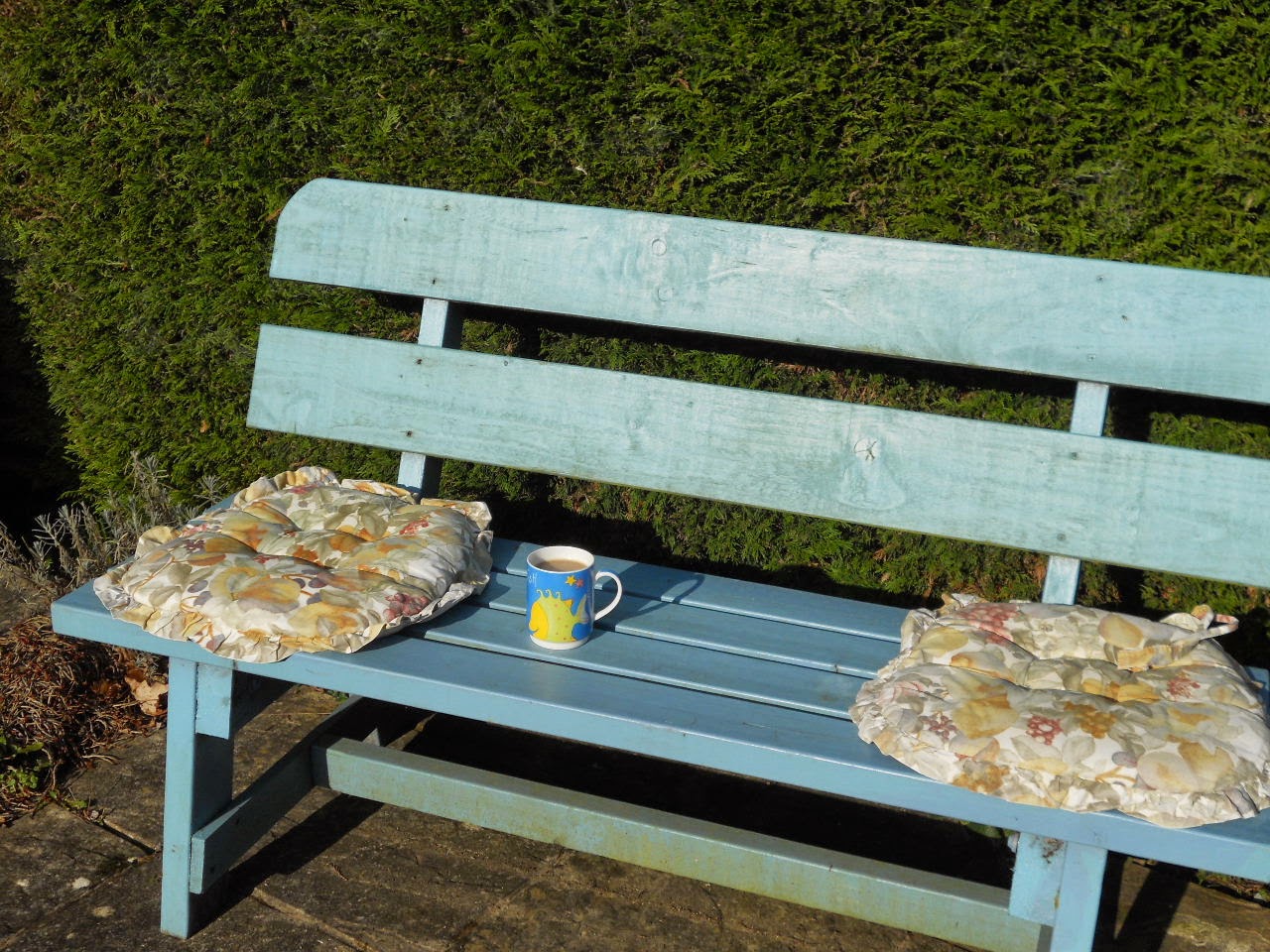 By 11.00 o'clock the sun had a certain amount of warmth to it although the frost remained where the sun didn't reach and when I noticed that the blue bench was in full sunlight I wiped off the damp and took an old cushion and my mug of coffee outside and sat there for 20 or 30 minutes.  Sheer santosha moments as I closed my eyes listened to the birdsong and felt the heat of my mug bringing warmth to my hands, my sleeves pushed up a bit to maximise the Vit D I might get, my mind wandered and for those few minutes I was truly in the moment and at peace with the world!  I checked the temperatures and discovered it was 15 degrees on the bench in the sun and only 5 in the shade.  When I came back into the kitchen there was a welcoming smell of casserole wafting from the oven as lunch was cooking another moment of happiness and I felt a sudden urge to make some flapjacks since the oven was on and they would take but a moment to make. 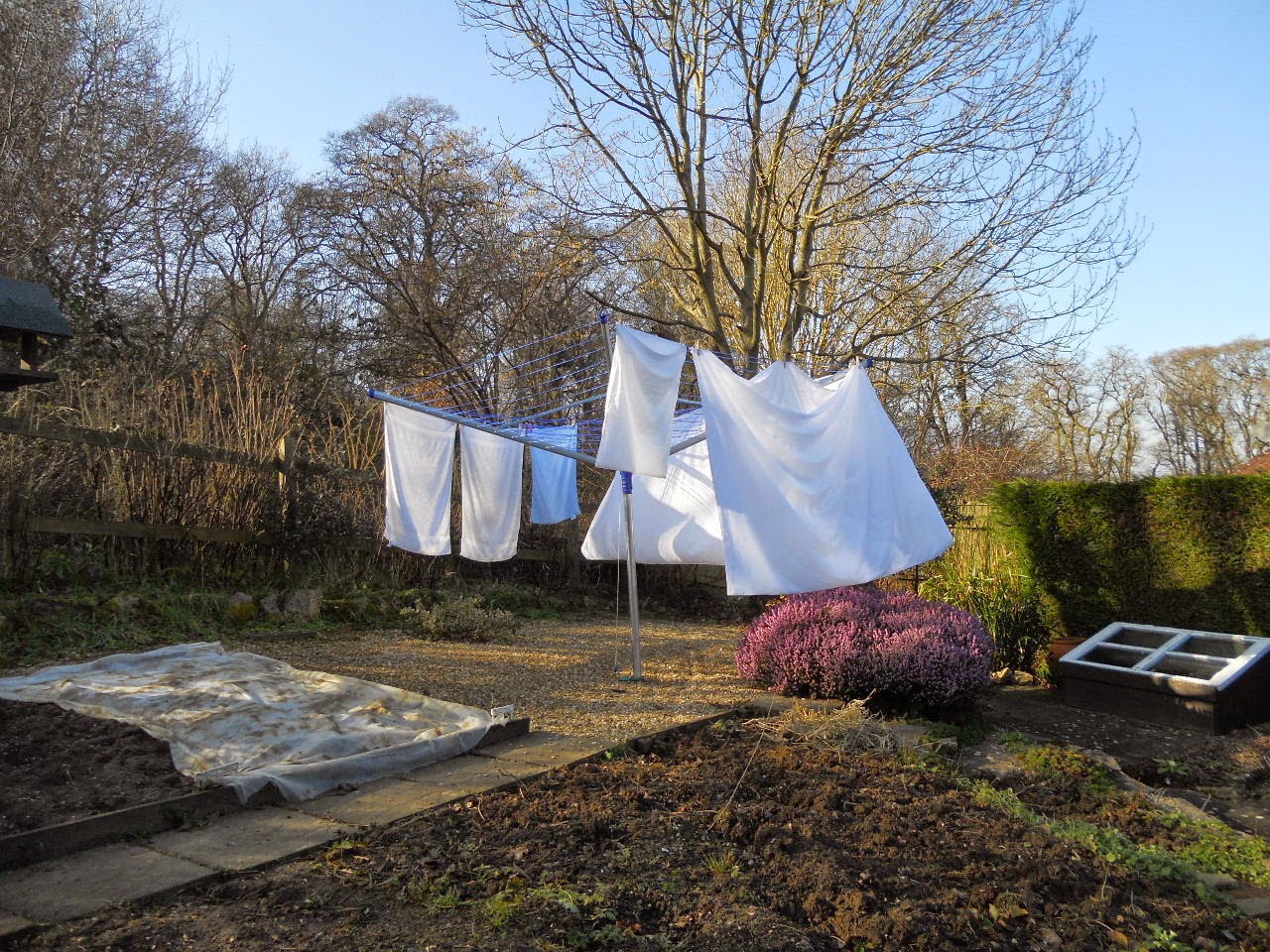 The washing had finished by then and I put the sheets and towels on the line - I did manage to get a couple of big bath towels dry outside last week in the wind and wondered if the sheets might dry today.  There's something so pleasing about seeing washing blowing on the line knowing that when it comes in it will have that wonderful fresh air dried smell I think.  I really can't imagine not being able to line dry my washing although I know not everyone can. By the way that isn't one of my sheets on the ground but some agricultural fleece in an attempt to warm the soil a little in readiness for the spring planting - looks filthy as cats or badgers seem to have walked all over it leaving muddy prints!

As I write this I have just had a cup of tea - not outside as there is no sun in the garden now - and a piece of flapjack and then fetched the sheets (dry) and towels (still damp) in from the line.  It gets cold very quickly once the sun goes down but it is so lovely to have the daylight till 5.30 or so now.  I don't think I would cope with living any further north where although the summer days would be very long winter would be so dark. 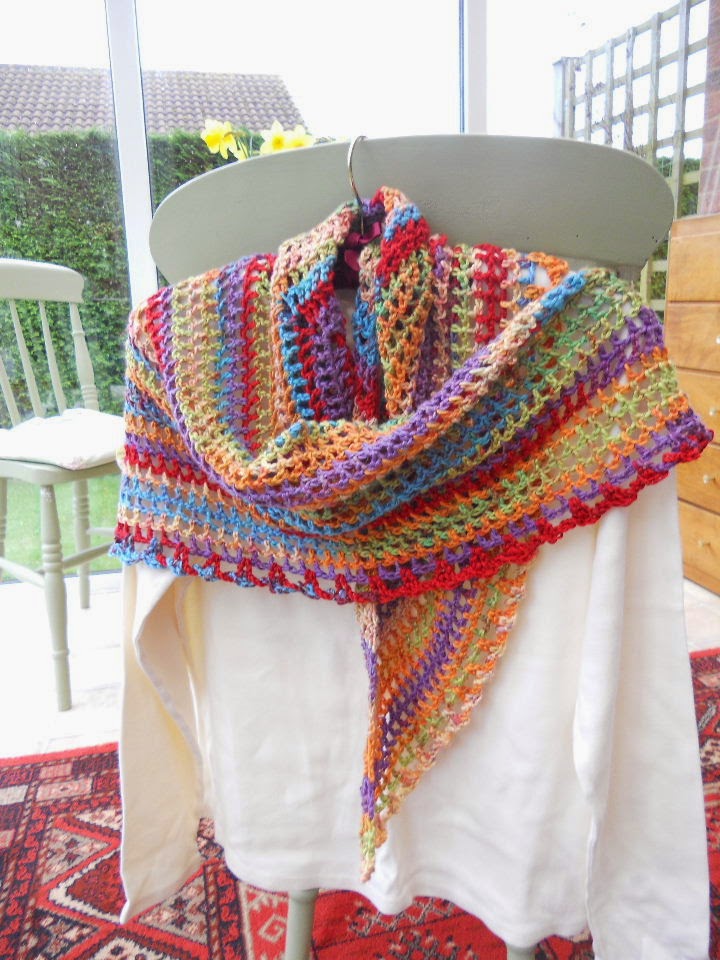 During the time that I haven't been blogging nor using the computer as much I have had more time for other things and have completed a crochet shawl started some months back. I used yarn I bought to make a bolero years ago and never finished! 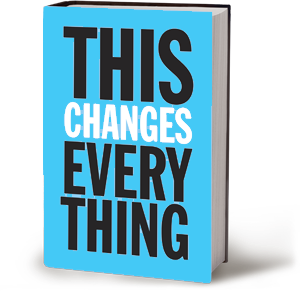 I have been reading too and this was one of the books I read.  It was a well researched book at times shocking, frightening, horrifying and many other similar adjectives and not an easy read but one that maybe should be read widely as just becuase we don't see or know about what is going on in our world doesn't mean it isn't happening.  The book is about climate change and capitalism and whether or not one shares the author's views there is no doubt that climate change is happening.  There is a blog too under the same name if you are interested.  If you have read it I'd love to know your views as it is a book that cries out to be discussed. 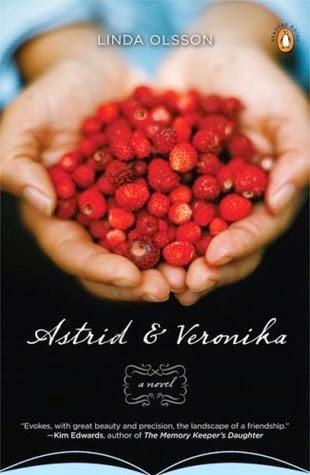 As a bit of light relief to all this doom and gloom I also read a book I'd bought in a charity shop just before Christmas thinking that if the Wanderer who was to visit then wanted something extra to read it might suit - she didn't read it but I did and I loved it!  It tells a story of a friendship between two very different women. There have been others, books I mean, but none I can particularly recommend or perhaps it is that I can't remember what they were! 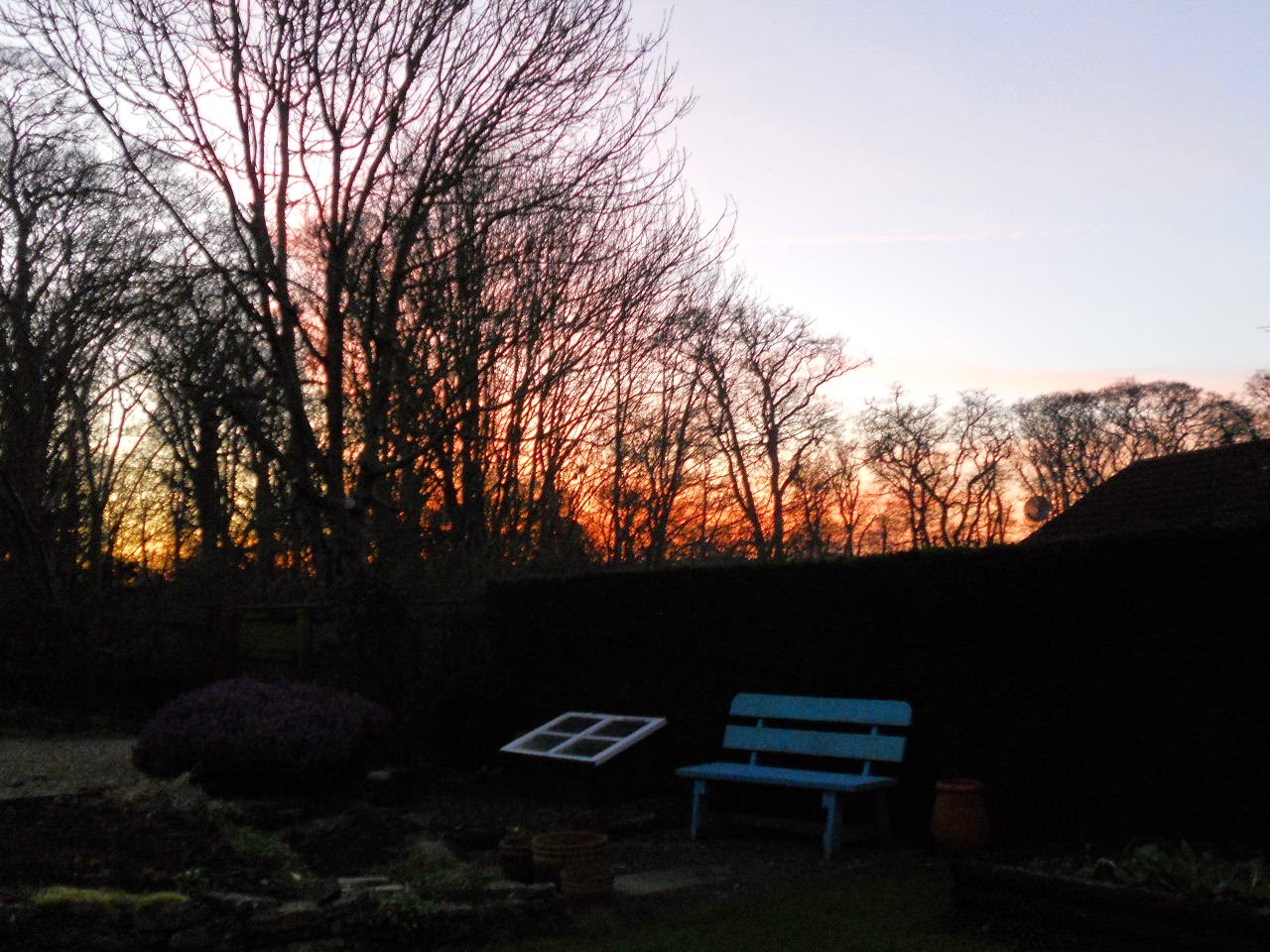 Same view at 5.40 and I'd better stop waffling on now especially as it's Sunday today and not really one of my 3 days a week computer days!