Where does the time go - it's been almost two weeks since my last post! 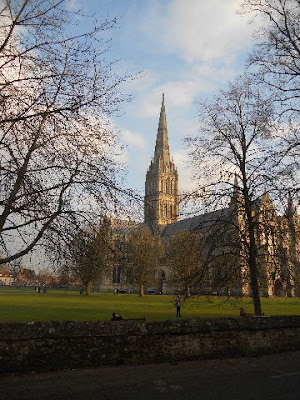 Whilst I have been away from blogging I have been out and about - firstly I had a day out with a friend here last week.
. 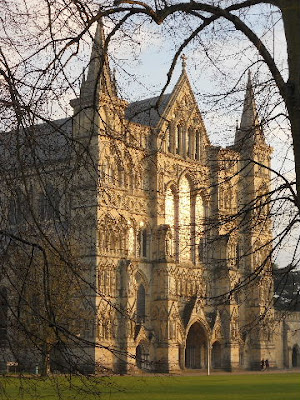 The sun caught the windows on the west front of Salisbury Cathedral turning them to gold although that doesn't really show up in my photo. 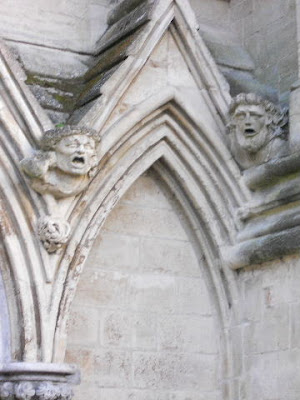 As we wandered round I looked up and my eye caught these little gems - aren't they fabulous? 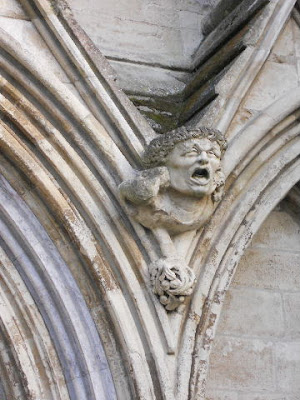 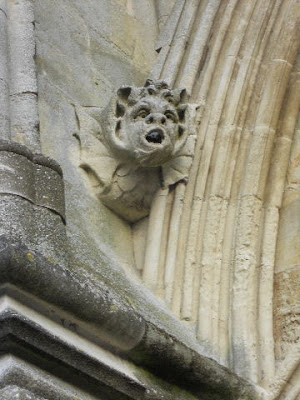 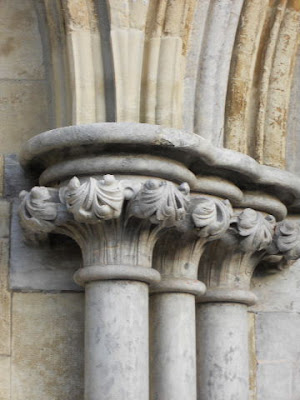 And the detail in the carving on the columns too. 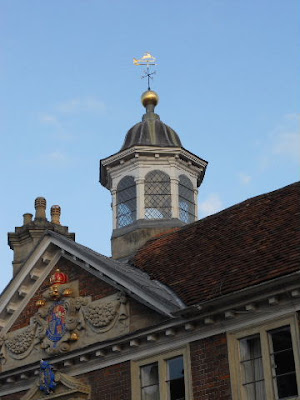 This is the roof of the almshouse in the Cathedral Close isn't it beautiful? 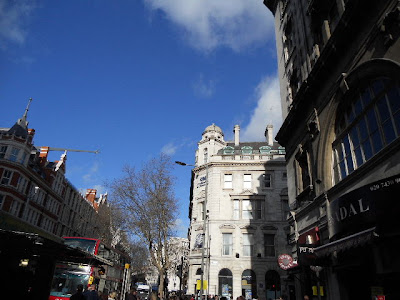 Yesterday we went up to London to meet up with some friends over from France and though the wind was very cold we were lucky to have a bright and dry day - apart from one very brief shower in the afternoon. 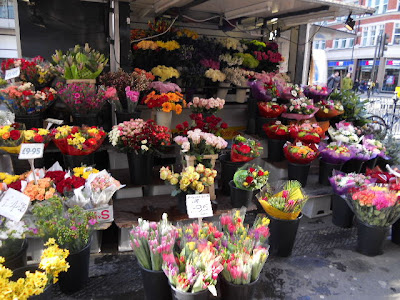 Flower stall outside the Underground where we met. 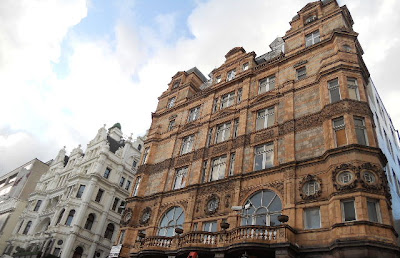 London has some amazing architecture if one looks up though you do need to keep an eye on the pavement in front too as with the numerous works taking place - maybe in readiness for the Olympics? - you could easily break your neck! 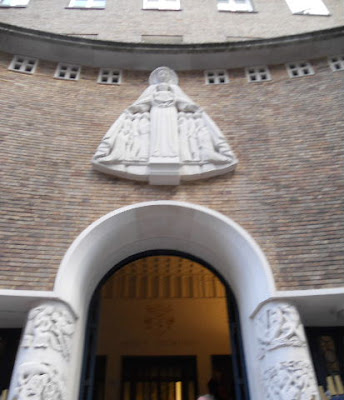 This is the church of Notre Dame de France near Leicester Square which another friend had suggested might be of interest to our French friends whom we were meeting.  I hadn't known it existed before and it was a real oasis of peace and quiet inside after the noise of the city. 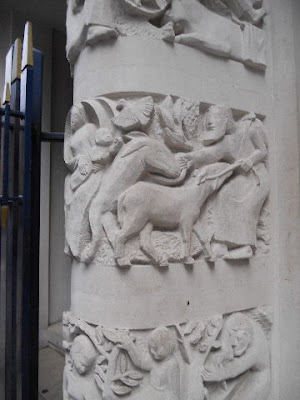 But what really struck me was the beautiful tapestry above the altar which reminded me of the tapestries I saw when I visited an exhibition of work by Dom Robert in Aubusson with the ladies of the patchwork group I belonged to in France.  It turns out that this tapestry is in fact one of Dom Roberts works too.  I was allowed to take a photo but as it didn't come out too well in the dim lighting I bought this postcard instead. 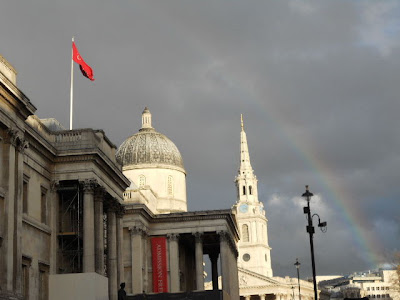 After lunch in what turned out to be a not very wonderful pub - we did though have time to sit and chat with our friends - even if the food wasn't that brilliant - we decided to go to the National Gallery -  looking up I noticed this wonderful rainbow just after the short shower we had. 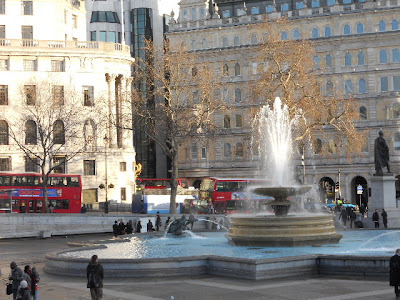 Situated alongside one side of Trafalgar Square 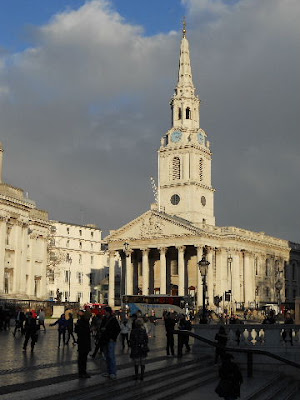 With St Martins in the Field almost next door it was a stunning building.
I hadn't ever visited it before and being the art philistine that I am wasn't expecting to enjoy a visit here that much, it being our friends who suggested it.  Well never mind the paintings - I was blown away by the building itself - sadly no photos were allowed and I didn't get time to see if there were any postcards showing the details in the shop before we left. Am I the only person who could visit this gallery and see some of the most wonderful art work in the world and be struck not by the paintings but by the beautiful mosaics on the floor, the wonderful gold and coloured painted columns and ceilings, the fabulous fabic wall coverings the glass, the ....?!!  Oh and the perfume of two enormous vases of lilies in the front entrance.  I did so wish I had been able to take some photos as nowhere on the web have I found any images to show you what I mean.  You must go and visit for yourselves.  One series of paintings did take my fancy though and that was the Mariage a la Mode paintings by Hogarth  done in the mid 1700s and which tell a story of a marriage and its problems when the wife takes a lover and were full of amusing details.  My French friend and I agreed it was a sort of 18th century bande dessinee - a genre popular in France and which we might call comic or graphic novels perhaps. 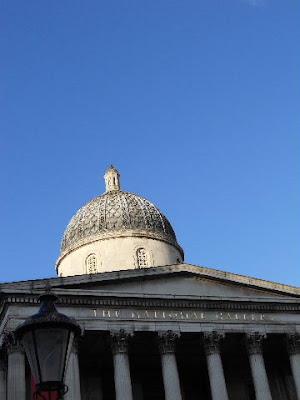 Just look at that sky!  See it isn't always raining in England after all!  We left our friends as dusk was falling and made our way back to Hammersmith for the bus home as always wishing we had had longer and planning to go again soon. 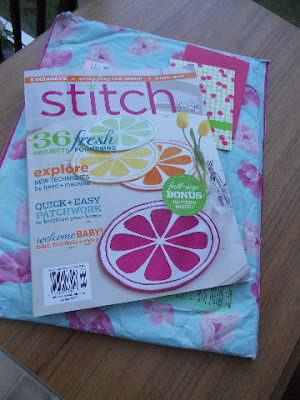 Earlier in the week I had received a package from Louise - we had agreed to exchange magazines and this was what was in my pretty jiffy bag.  It is a lovely magazine filled with ideas I will want to have a go at.... 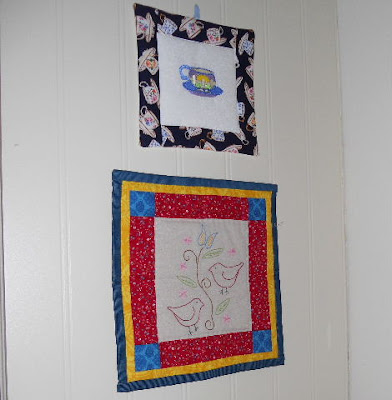 ...and along with my magazine she had sent the lovely little red quilt shown in the photo above  and which hangs well with the navy one which came from America too at Christmas time. 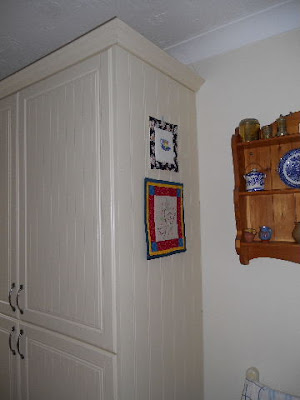 Louise had suggested it might go in the back of my cupboard!  Not at all - it is lovely and it hangs on the side of my cupboard Louise and will be enjoyed by all.  Many thanks.

I am also looking up this week because I finally got the results of my retinal scan done back in November and it is all normal.  The problem has more or less resolved itself and it seems it was nothing to worry about though my glasses seem to have been underprescribed - I mention no names but it seems going to the cheaper chains is not to be recommended!   I will now need new glasses but have otherwise been discharged.  Thanks for your concern.

For those of you who commented on the fingerless mitts and shawl on my last post I have posted the patterns on a separate page which you can access by clicking on Patterns in the section headed Extra Pages at the top right side bar.

Who's gone?  My muse that's who.  I can't think of anything to say lately - can you imagine me not having anything to say?  Well neither can I but it's true! 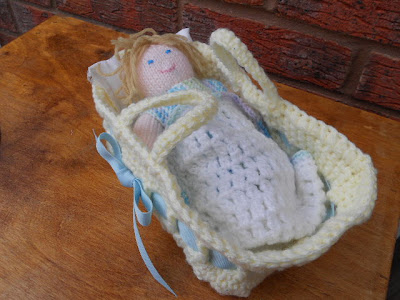 I think blogging is something you need to do regularly otherwise you lose the inclination.  However all is not lost and in the time I have saved by not being on the computer all the time I have been busy making things.  This little dear is for a friend's little girl for when her new baby brother or sister arrives.  I'm afraid her hairstyle is a bit like mine as the pattern (from an old Woman's Weekly) says "cut strands of yarn and stitch to doll's head" but it doesn't say how!! 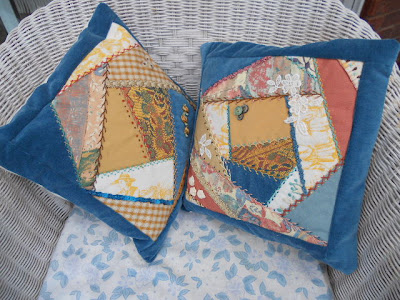 The cushion above on the left is one I made earlier and have in my guest room so when a friend admired it I decided to make one for her too - not quite the same but then each piece is unique! 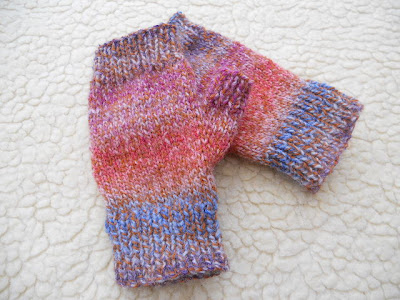 I've made 3 pairs of these in different yarns and given two away and kept this one for myself as I find them so useful and the pair I already had are getting tatty. 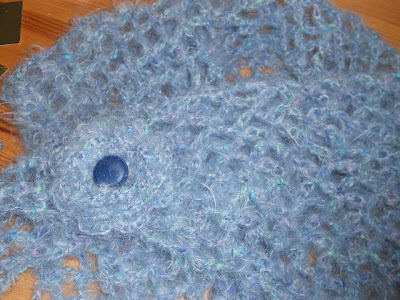 A mohair shawl with a corsage.  Using up some yarn given to me by a friend. 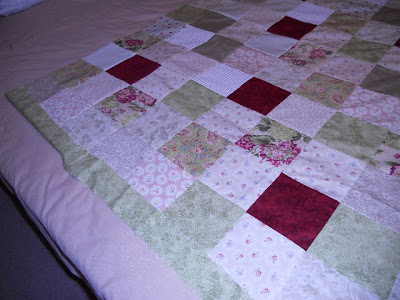 And finally my proudest achievement the beginning of a little lap quilt!  Spurred on by the news that my wanderer is to return within weeks instead of months and she will feel the cold after 2 years travelling in Australia.  Made using up fabric I already had - see I CAN do it!!  However now comes the difficult part the wadding, backing and finally the quilting .  I'll let you know how I get on!

Postscript added 16/1/12 - Spent yesterday afternoon quietly cutting up oranges whilst listening to Classic Fm to make marmalade and now have 9 pots of Seville orange marmalade to add to my "makes"!
Posted by Marigold Jam at 16:14 29 comments: 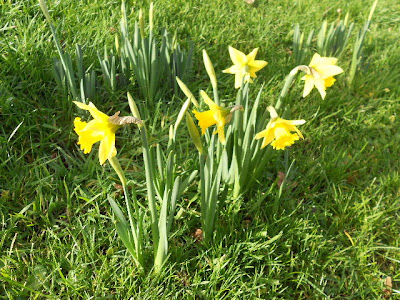 Do you make resolutions at New Year?  I decided not to this year as I don't remember what I've resolved and even when I do I don't manage to keep them which brings a sense of failure.  Why is it only at New Year that we feel we can attempt to do all those things we always meant to do I wonder?  Surely each day is a new start and brings the chance to begin again if we so wish?  So my resolution - if I made one - would be to take each day as a wondrous opportunity to start again and not feel that once I have got to 2nd or 3rd January and failed then I must wait until the following New Year! 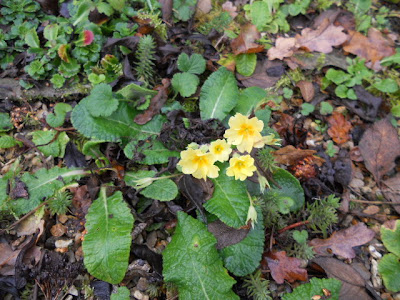 I have just read on Simone's blog Linden Grove that she is having a word for this year and hers is to be "create" - a word - now that sounds like something I could handle.  On second thoughts maybe I could have a new word each month so it didn't get boring.  Let's think what shall it be for January?  Hopefulness seems to fit the bill I think    What word would you choose I wonder? 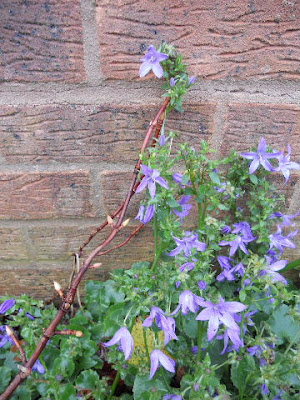 We had some crackers at Christmas and as well as the usual hats, silly jokes and riddles each one had a topic for conversation and one of these was "If you had one day left to live how would you like to spend it?"  Although there were only 3 of us round the table this one provoked some very different responses.  My sister-in-law said she'd have a huge party, my husband said he'd do as he always does and I wanted to go for a long walk in my beloved countryside and then catch up with all my friends for a chat on the telephone.  I wonder what this says about our various personalities?  What would you do?
The photos were all taken recently - now if that isn't hopeful I don't know what is!!   Wishing you all best wishes for 2012 .
Posted by Marigold Jam at 13:59 31 comments: