I've been on a bit of a retreat!  My laptop which I told you about here and which I had eventually got to grips with threw a wobbly just before Christmas and I could neither shut it down properly nor turn it on and thought it would have to go back to John Lewis under guarantee.  As my nearest John Lewis is in Exeter it was likely to be a couple of weeks or more before I would be able to take it.  I took this as a sign and decided to give up on using a computer so much although to give up altogether would not really be feasible now that my friends all know I can be e-mailed and I speak to a French friend on Monday mornings via Skype but I decided that a 3-day week (Mondays, Wednesdays and Fridays) might be sufficient and give me more time for other things which has indeed proved to be the case.  It's been more like the old times using the computer only to e-mail friends and for Skype and I have not felt inspired to write a blog post nor to spend much time reading those of other bloggers either I'm afraid - sorry!

However now that the computer is feeling rested - it ran down completely since it couldn't be shut down properly and then Mr M had a look at it and it seemed to be OK - to tell the truth I was half hoping it would stay in the cupboard for ever - and having just returned from a walk which I thought you would like to share here I am again. 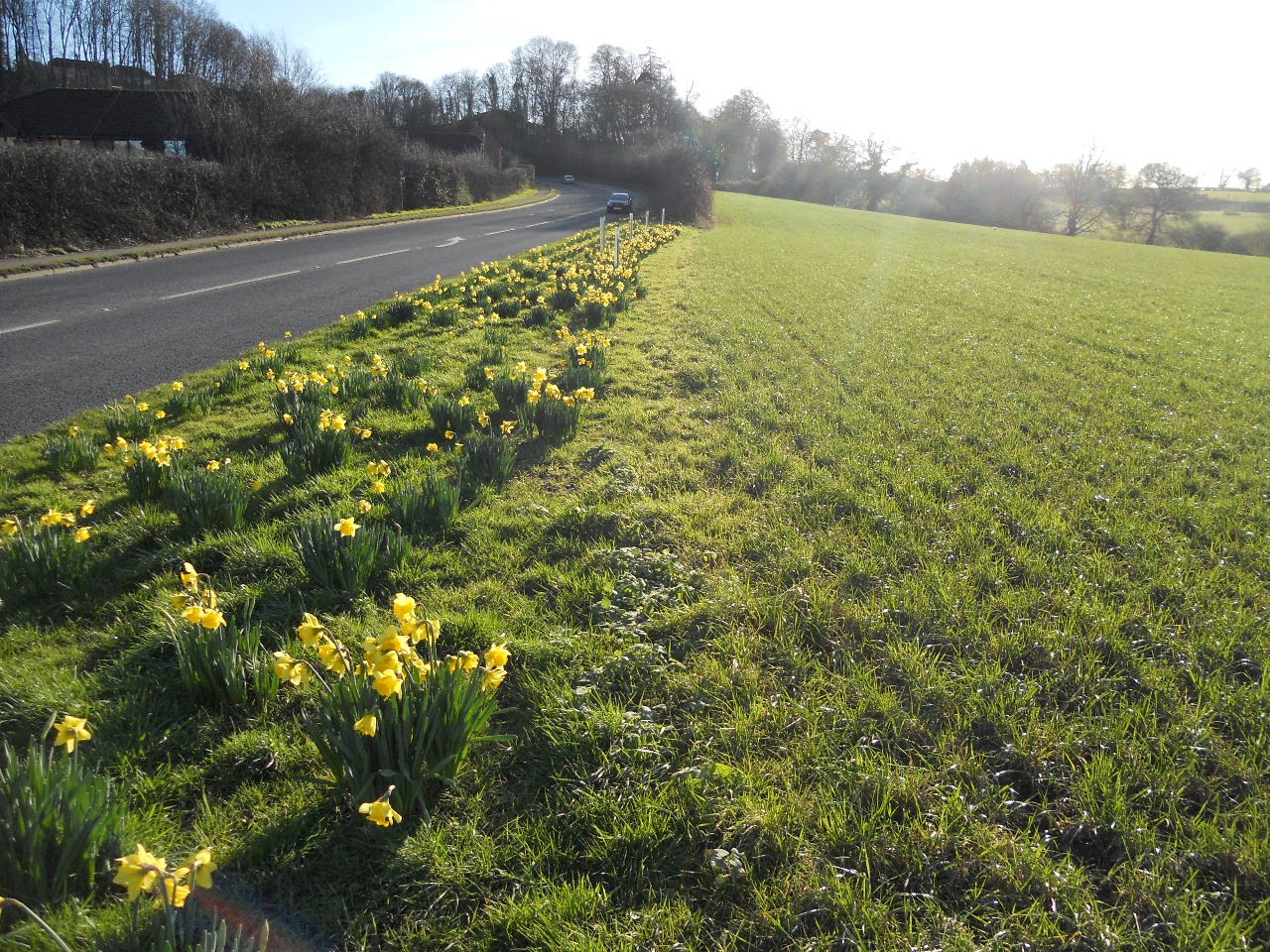 It has been very chilly today and the frost hasn't melted all day in places where the sun didn't get to it but the sky has been blue and the sun shining so having some letters to post to France and not having the appropriate stamps I set off to walk to the post office going the long way round.  I set off up the hill towards the A30  This is a busy road and I seem to have managed to capture it with only two vehicles on it here! 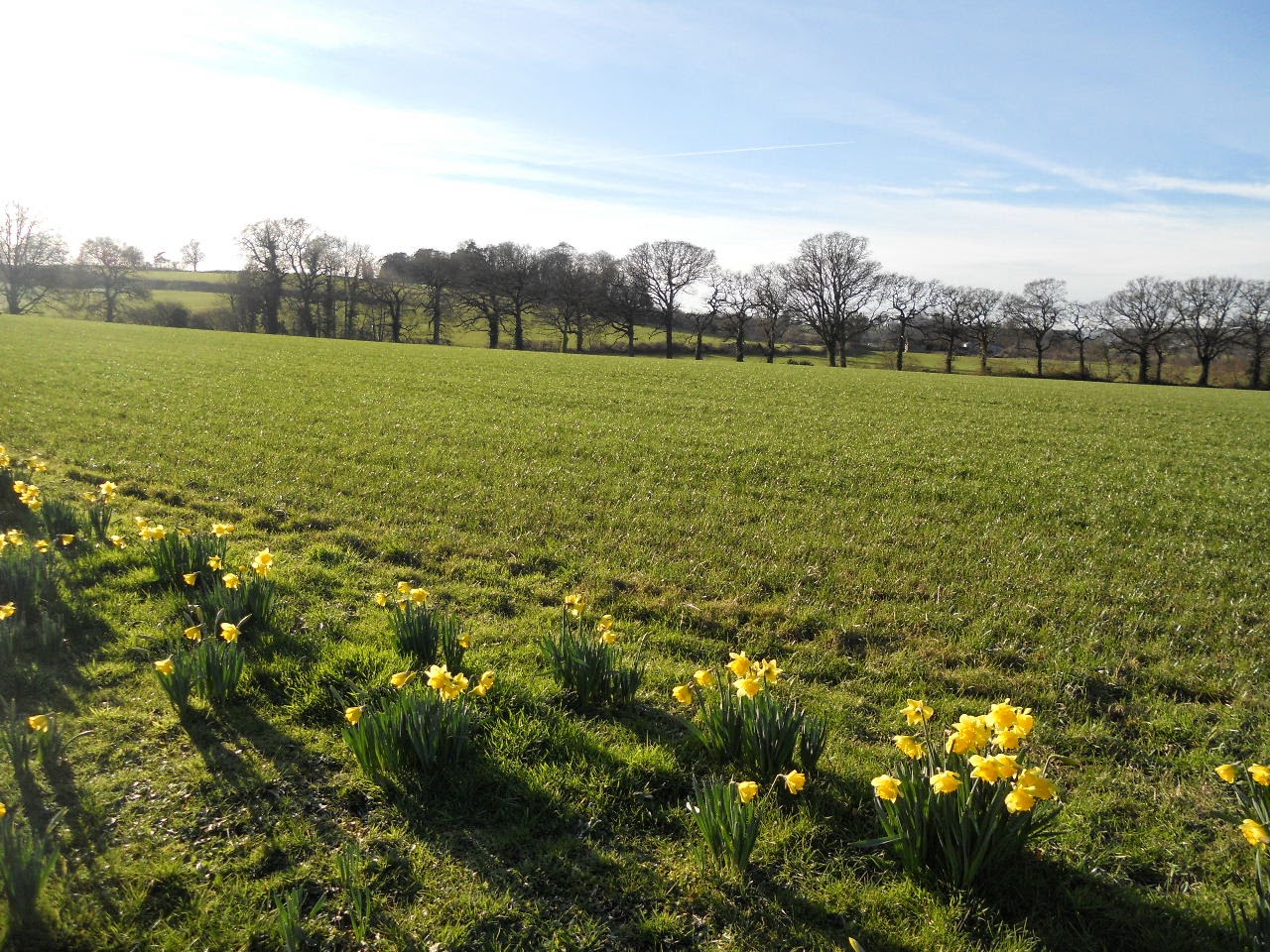 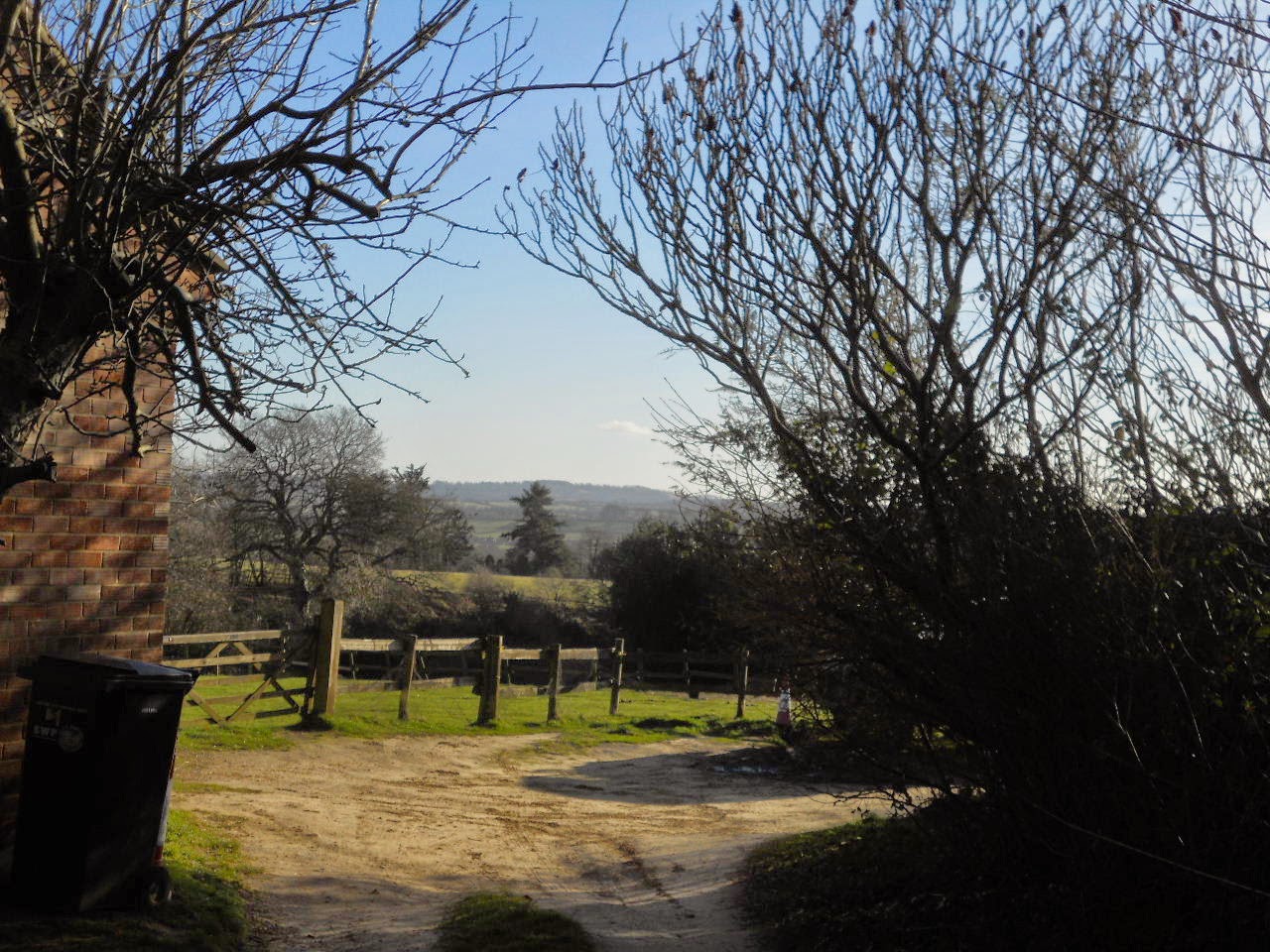 At the top of the hill I joined the A30 which I walked alongside for a while and then turned off  here.  The noise of the traffic was soon left behind as I walked along the sunken footpath .... 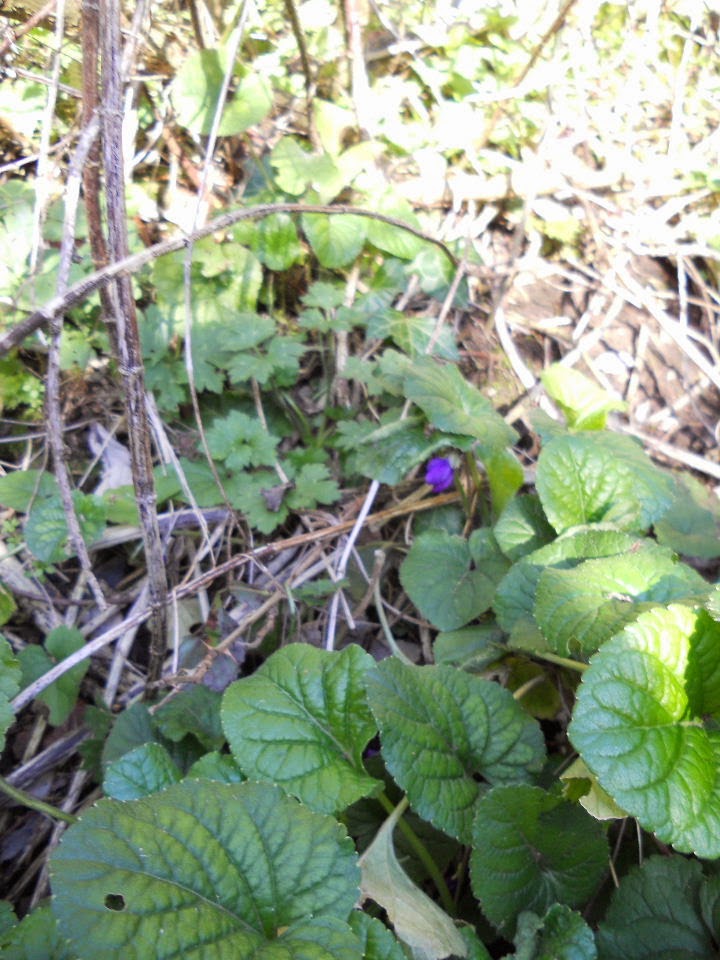 .... listening to the birds above and noticing this tiny violet in bloom in the bank.  Yes I know you will need your glasses on to see it but it's these little things which always get my attention! 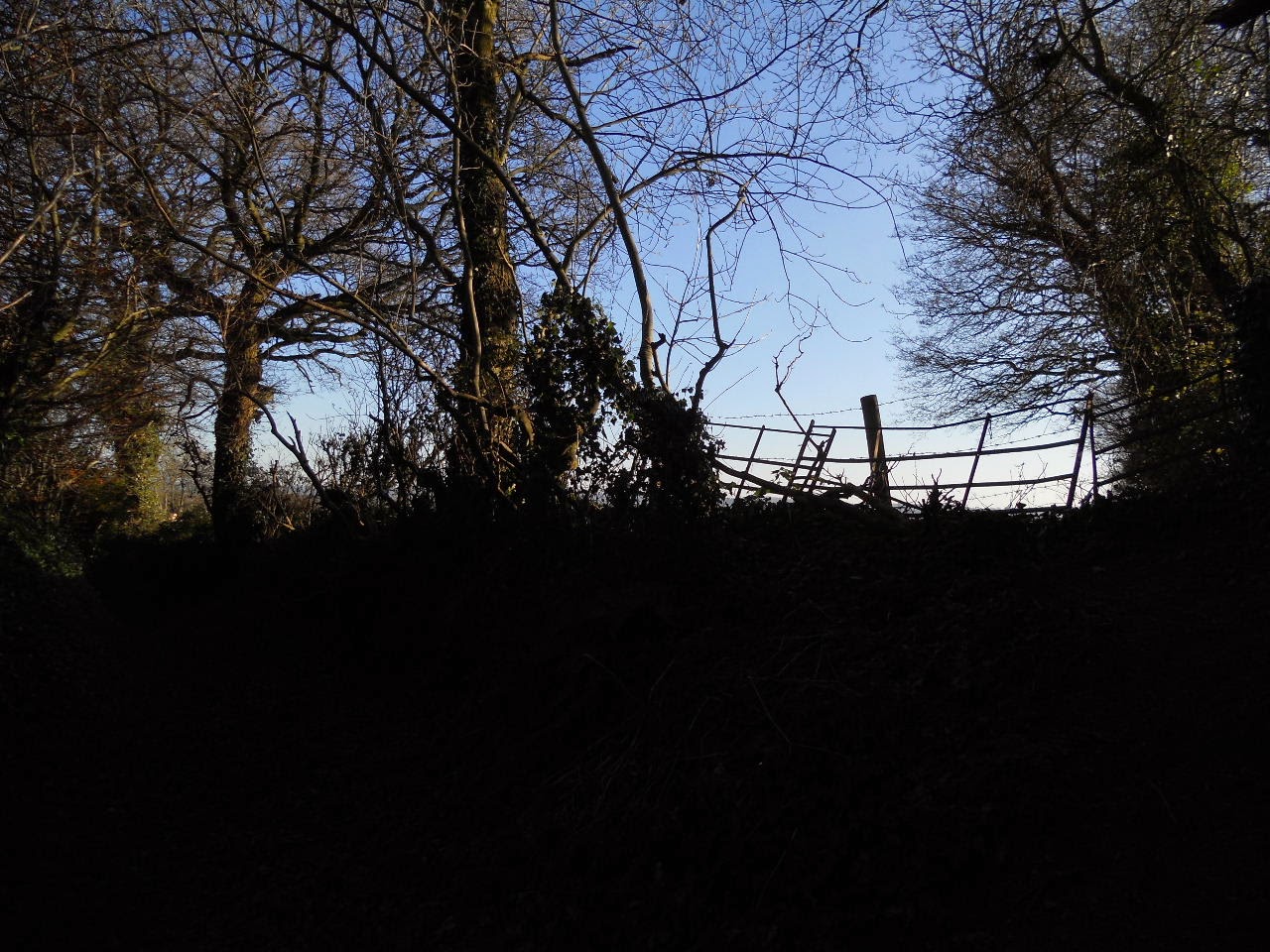 I wondered what the view would be from here and clambered up the bank to find out..... 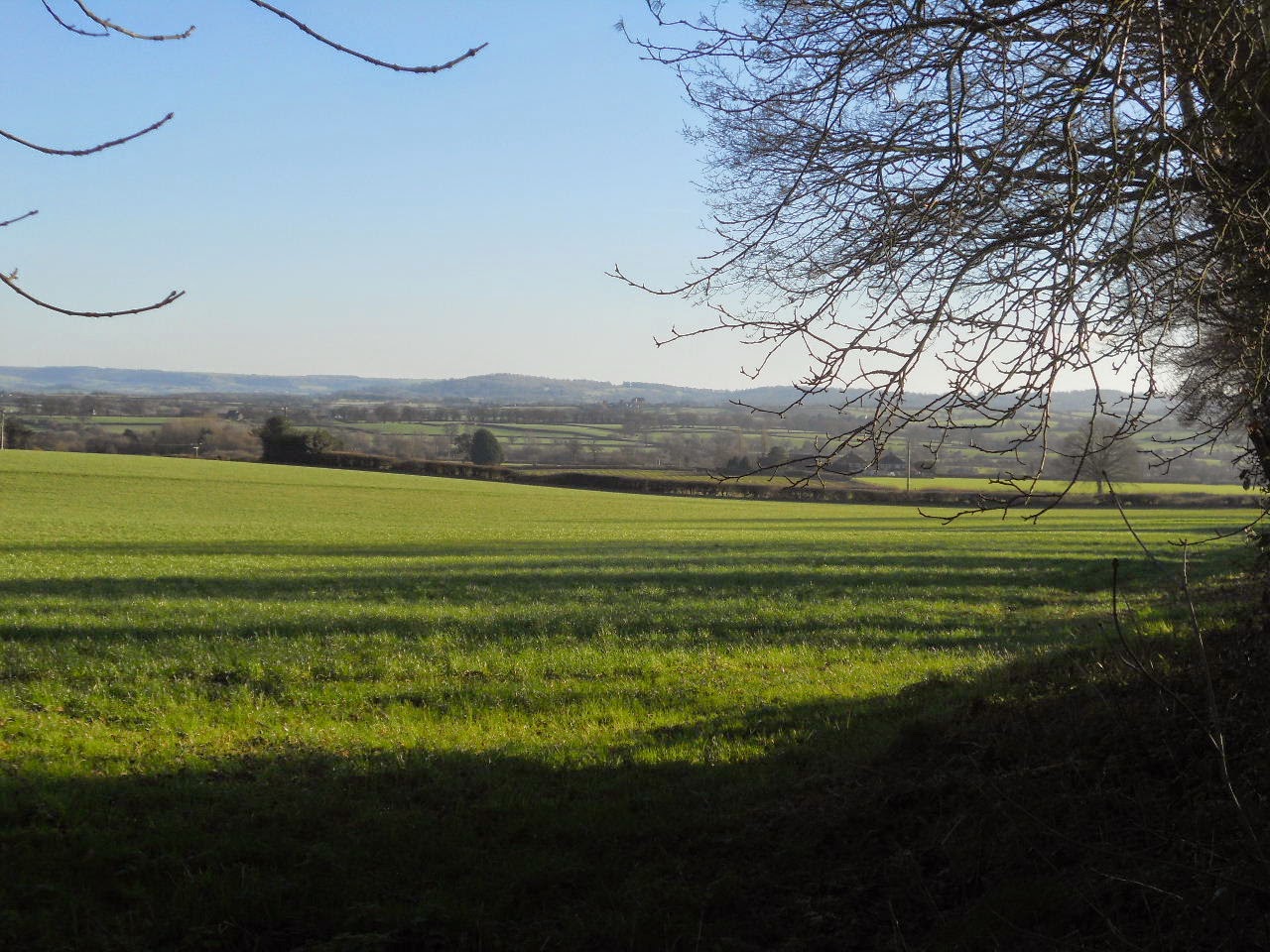 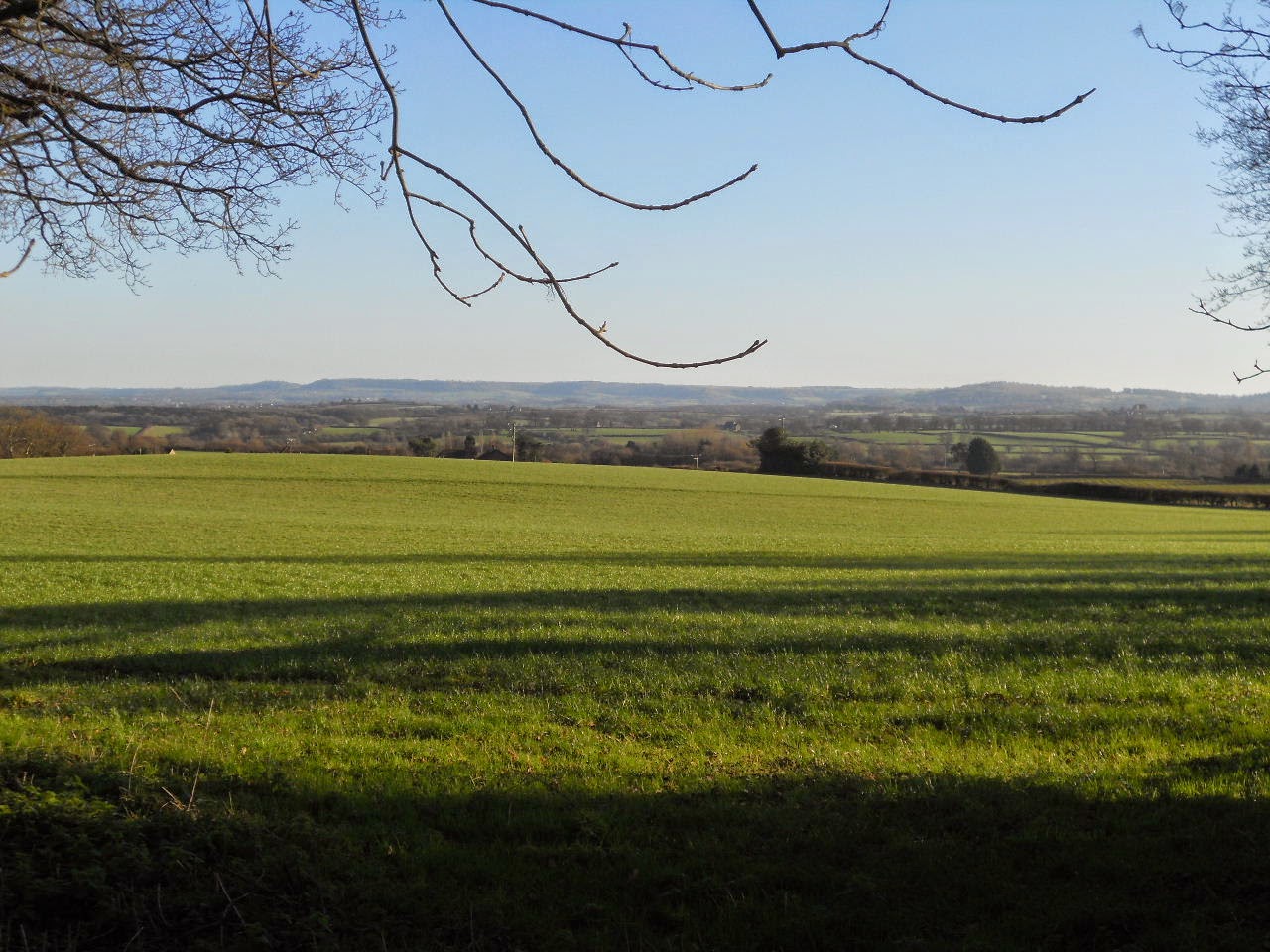 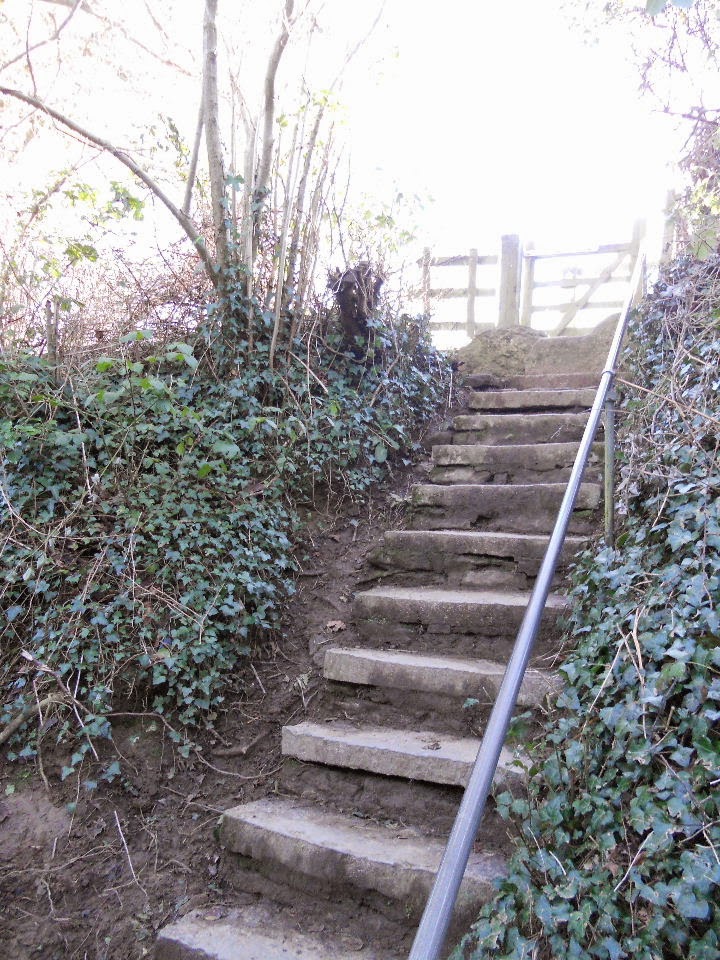 After a while I came to these steps and once again wondered what the view would be so climbed up for a look.... 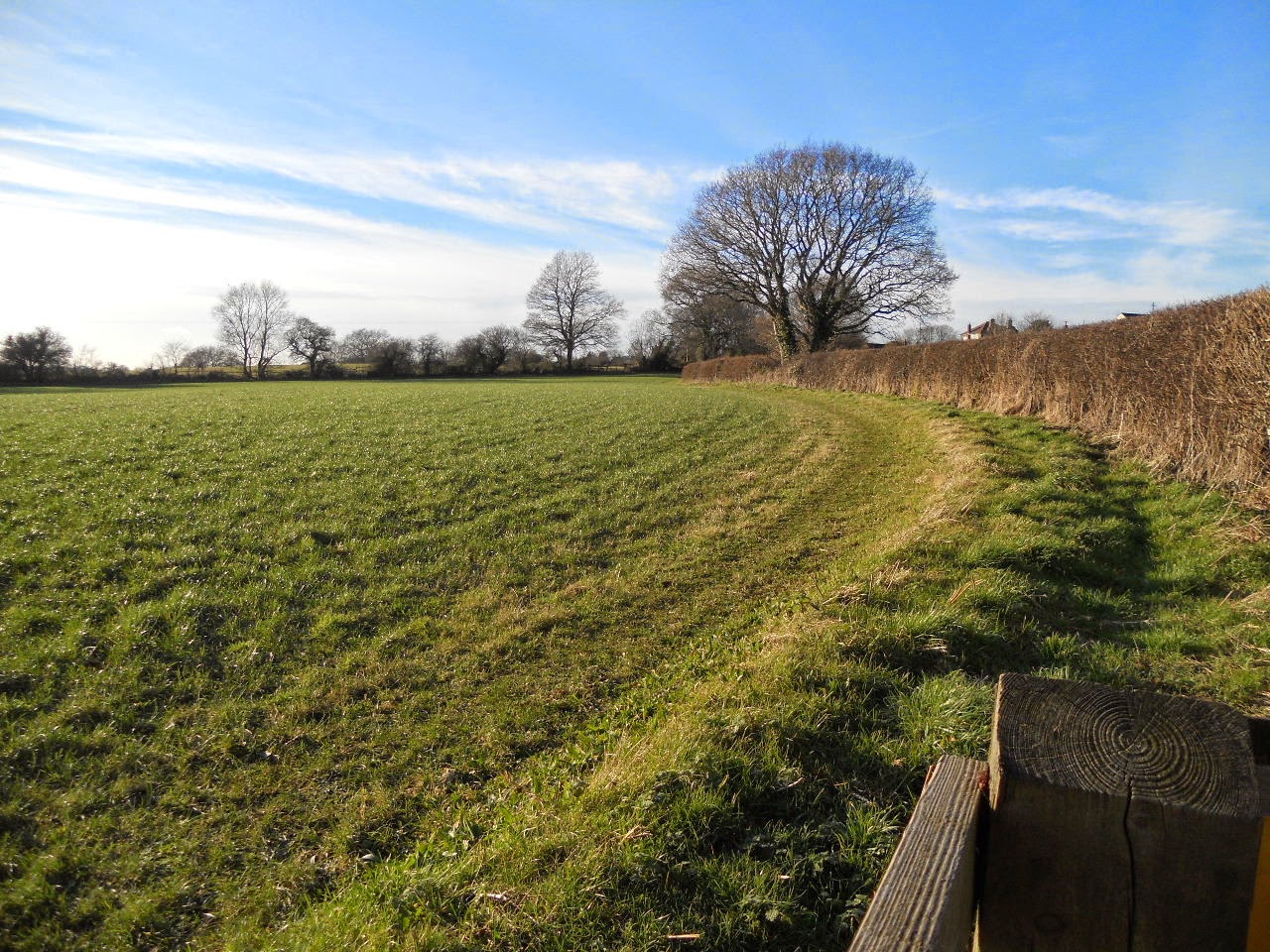 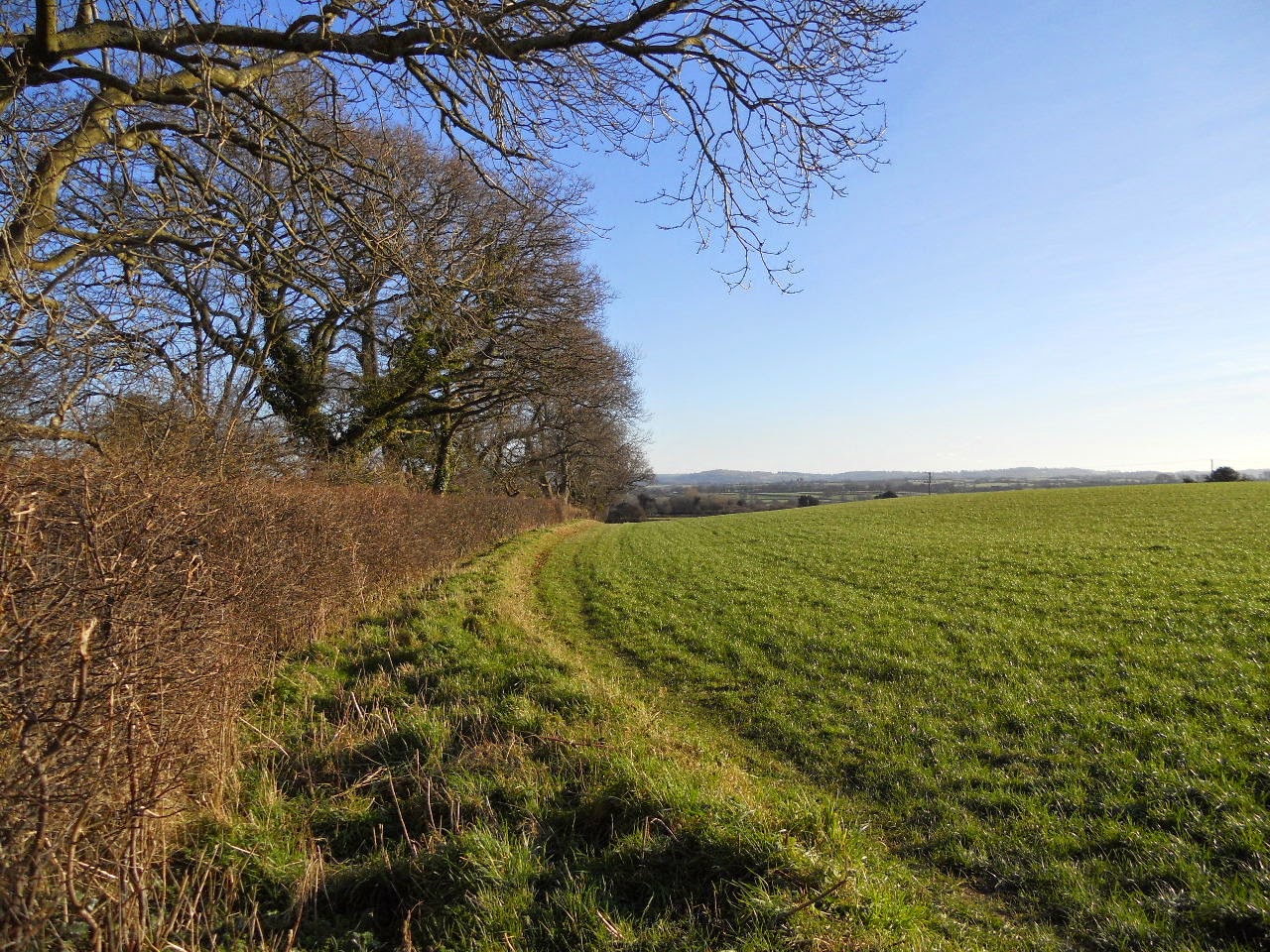 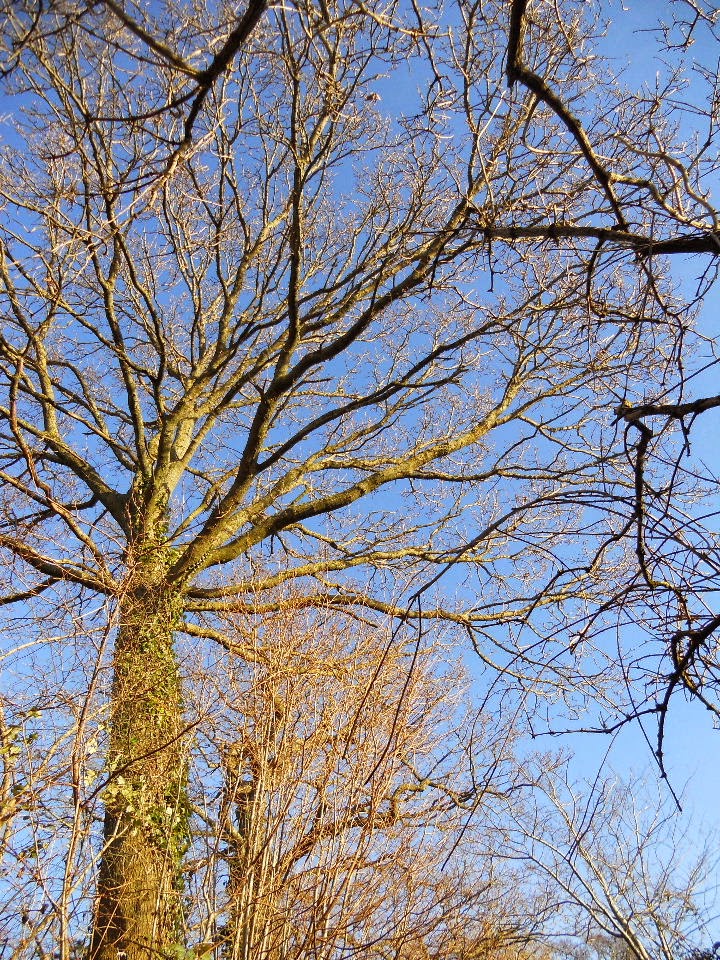 It was so peaceful down in the shelter of the path and I stopped for a moment to look up - not wise to continue walking on a path like this if not looking where one puts one's feet- as I could hear a robbin singing above me.  This was such a moment of santosha - I was absolutely in the moment just me and the peace and the birdsong that I actually said out loud "Thank you God"!! 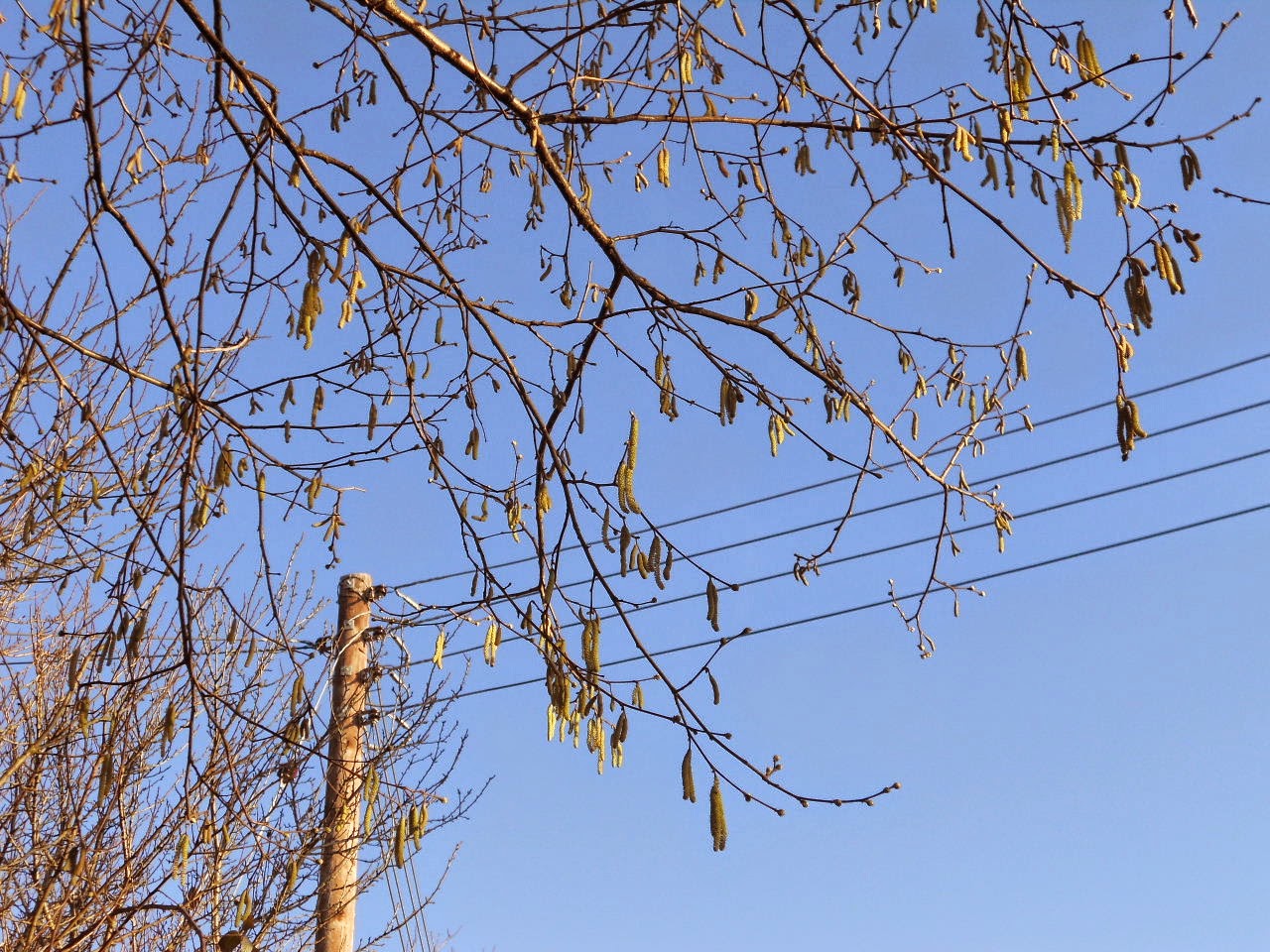 See how the yellow catkins are already on the trees too.  The path eventually comes out onto a residential road but still quiet and peaceful and I continued on my way eventually coming out at the post office on the busy main road.  Having posted my letters I made my way home via my usual route through the wood - no pictures here as by now the sun was lower in the sky and it was all in shade though.... 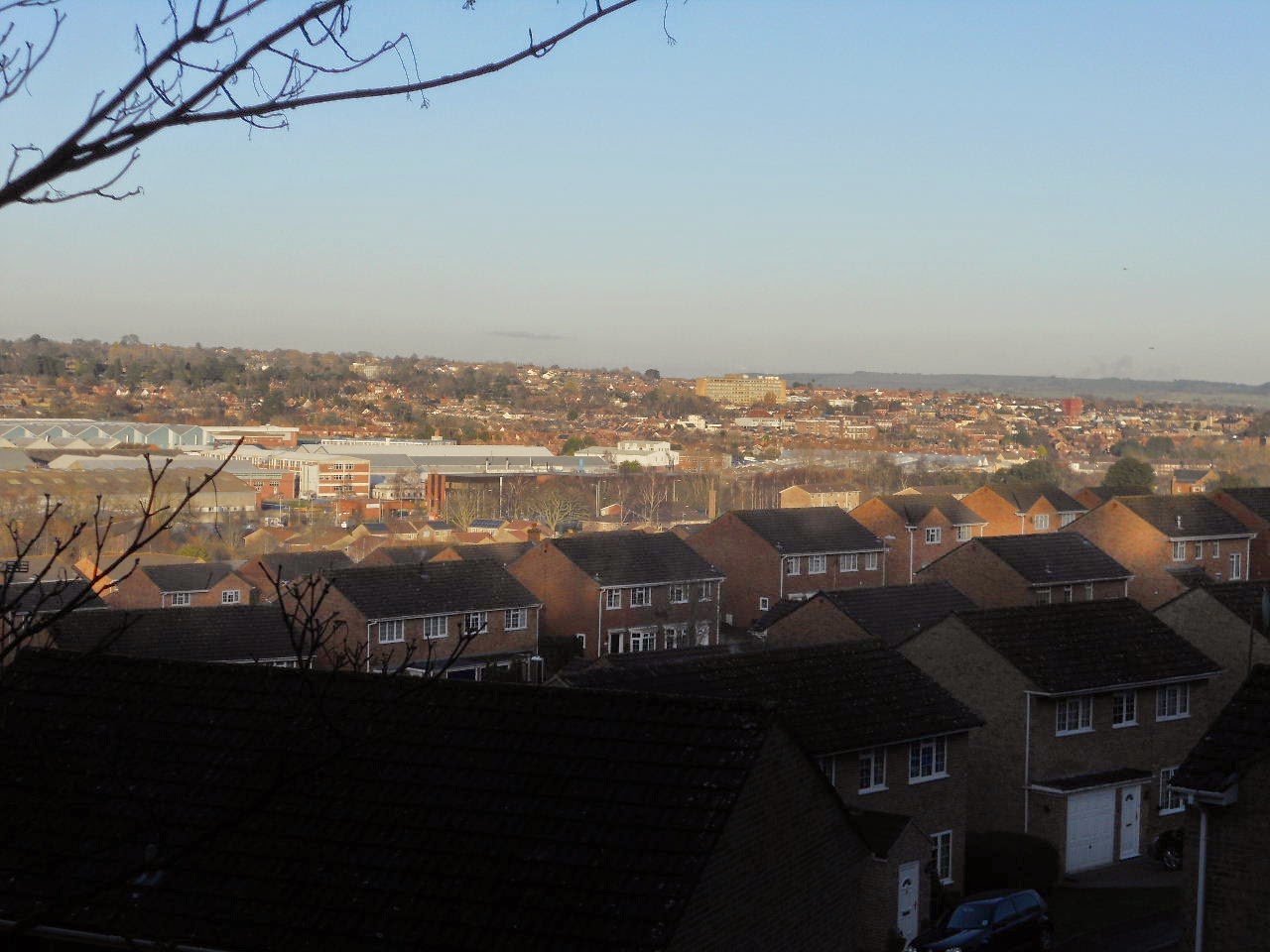 ... the town was still in sunshine.

Monday afternoons for the past 5 or 6 years have always been my time to don my volunteer's hat and go and visit an elderly partial sighted lady on behalf of Somerset Sight but since she has been moved to a nursing home which is a round trip of 40 miles instead of the 3 miles I used to cover I now go every other week which is how I was free today to do this walk.  My thoughts went to last week when I visited the nursing home and to the contrast between that day with all those old dears (some may not be any older than me of course!) sitting in their armchairs waiting for someone to bring them a cup of tea or to take them to the toilet, two televisions on which nobody seemed to be watching (why do they think old people want to sit in front of the television all day I wonder?  It would be my idea of hell!) many without visitors and today when I was free and able to walk in the countryside and I thought that if I ever get to the point when I can't put my coat on and go for a walk then I'd rather die than spend my last years institutionalised like my friend Rosa who hates it too but has no choice!  I thought then of my great aunt - my maternal grandmother's youngest sister - who had lived in the house in which she had been born and lived most of her life which had no electricity, no mains water just the pump outside the back door and no mains sanitation either let alone an indoor toilet or bathroom.  She was a sensitive soul I think and when she died I inherited some exercise books filled with poems she had written - not particularly good poetry but she obviously liked to write - so maybe that's where I get the gene from!  I often think of her sitting by the range which was her only form of heating and cooking on a dark winter's evening with no more than a candle or maybe a paraffin lamp and wonder whether her last years might not be preferable to Rosa's even though she is at least warm and dry and there is light and even if having electricity does mean all day television! Perhaps if I ever reach that point I will think differently but at the moment it is my one fear, needing to be in a home one day and I remember my great uncle (brother to the great aunt I am speaking of ) saying how he feared ending up in the workhouse so I guess it is not something any of us would choose!

However I will not dwell on such things but rather think of the dainty little violet and my moment of pure santosha listening to the robin's song this afternoon and let the future take care of itself.
Posted by Marigold Jam at 18:05