Trip to the seaside in December

Having suffered with a wretched cold for a couple of weeks which had left me feeling low and under my occasional "grey blanket" with absolutely no energy and all my joie de vivre missing and having hardly been out of the house with far to much time to think about the problems which beset our world at the moment I was keen to make the most of the sunny day we were forecast yesterday and to go out and get some sea air and a bit of a walk.  I think I have shared Wendell Berry's poem with you before but I make no apologies for doing so again:

The Peace of Wild things
By Wendell Berry

When despair for the world grows in me
and I wake in the night at the least sound
in fear of what my life and my children’s lives may be,
I go and lie down where the wood drake
rests in his beauty on the water, and the great heron feeds.
I come into the peace of wild things
who do not tax their lives with forethought
of grief. I come into the presence of still water.
And I feel above me the day-blind stars
waiting with their light. For a time
I rest in the grace of the world, and am free.

The water was not still and there were no wood drake just happy dogs and sea-gulls but the effect would be the same. 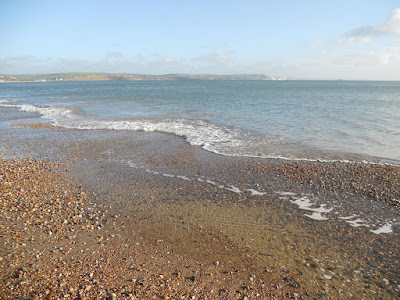 The best of the sunshine was to be in the morning so we set off for Dorchester about 10.00 parked the car and then caught the bus into Weymouth - I love the place in the out of season months but we avoid it during the summer when the beach is packed with lobster coloured bodies!  The beach was almost empty just a few dog walkers - no dogs allowed in the summer months so the dogs were having a great time dashing in and out of the water -  I'd rather them than me though as in spite of the sunshine there was a keen wind and I am sure the water must have been freezing but they didn't seem to mind. 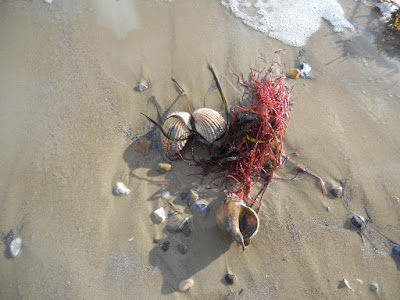 A little still life put together by the sea. 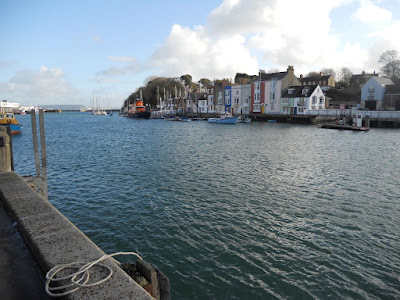 We didn't walk far just along the beach and round to the harbour and... 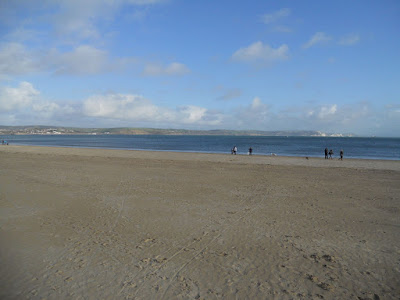 ..... back along the beach to the bus stop  - it is hard to envisage this same beach crammed with holiday makers. 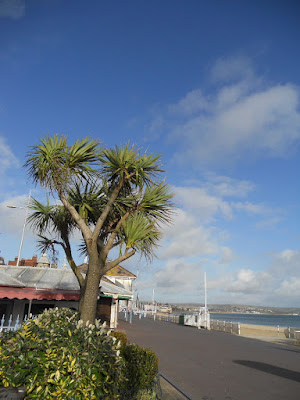 Not a soul to be seen - actually there were a few people who like us were taking advantage of the sunshine but not many. Back in Dorchester we had lunch and went to the library (living on the Somerset/Dorset border we are allowed to belong to both county's libraries) and then made our way home before it got dark - about 4.30 these days. I certainly felt better for the short walk and the sea air!  A sunny day is like a diamond at this time of year and being retired and able to take advantage of them when they come along is one of the bonuses of getting old! 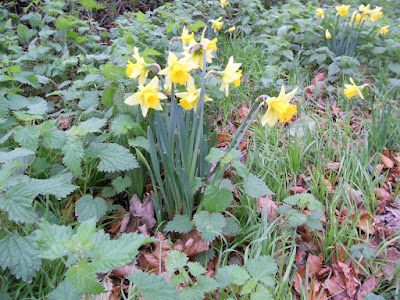 I spotted these cheery daffodils in bloom across the road on Thursday as I waited fot the bus to take me to neighbouring Crewkerne to meet a friend for lunch.  They are an early variety and I have come across them in bud late in December before but this early?!!
Posted by Marigold Jam at 14:32