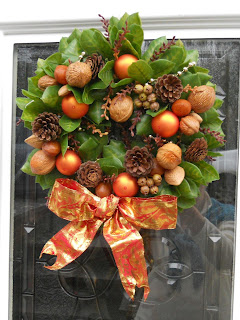 This is as far as I have got with Christmas!  The wreath is nearly 40 years old and was purchased in the USA on our first visit there back in 1977  I thought it unusual at the time as it had just natural looking nuts and cones and no red or gold sparkle and over the years I have sometimes added different bits and pieces to it and sometimes left it au naturel.  This year it has a ribbon bow and some orange baubles.  I have posted cards to dozens of friends and donated money to Medicins sans Frontieres and Crisis at Christmas, in lieu of sending gifts to friends who know the plan so don't feel obliged to send me gifts either, but cakes and puddings have I none, the tree is still in the loft,I have no turkey ordered nor crackers bought.  It is just as well we have no visitors arriving for the holidays as today at long last the heating engineers arrived to install a new boiler.  Ours was getting very tempermental and old (rather like me).

We had an appointment to have the work done back in October but the chap who was to do the job phoned at the last minute to say he had injured his back and wouldn't be able to come.  No real problem we could wait but we did expect to be kept informed and as the weeks passed and we could never get hold of him to find out what the situation was and if he was better or not.  We eventually left a message to say we would have to find somone else to do the job unless we heard from him by that evening as although we could manage with kettles of hot water for washing occasionally not always being able to get the water to run hot for a shower was not ideal.  So it was back to square one and getting other quotes although by this time it was well into November and everyone was busy.  We did get a quote from a firm who seemed professional and to know what they were talking about and a date was fixed for last week but would you believe it once again it was postponed due to the engineer who was to have arrived having phoned in sick that day.  We were given profuse apologies and kept informed as to what could be arranged and today two young men duly arrived as had been promised, though like policemen they do seem very young and I wonder if their mothers know they are playing about with gas and dangerous electrical tools?!!  I guess everyone looks young to us these days and they seem to be getting on quite knowledgeably.  The job however does mean that we shall be without heating and hot water for a couple of days so it's fortunate that the weather is mild for December.

The lack of water reminds me how lucky I am to have water on tap (pardon the pun) and of how it used to be when I lived with my grandfather back in the '50s.  We had no tap indoors but shared a cold tap in an outhouse with the neighbours and so for hot water it was a case of filling a kettle, from the bucket kept on the end of the table, and putting it on the fire.  As you can imagine showers were not an option and a weekly "bath" or actually a wash down in front of the fire was as near as we got.  Hair washing was a nightmare entailing pouring of hot water with a jug over one's head whilst leaning over a bowl.  No wonder it wasn't done more than once a week.  Not having any plumbing meant of course that there was no sink nor plughole down which the used water might flow so every drop of water that was used had to be either carried outside and round to the outside toilet or flung over the garden - not much fun in mid winter!  At least I have water from a tap to fill the kettle and electricity to boil it so washing ourselves is no problem and having washed my hair yesterday it shouldn't require washing again until the shower is in working order again.

Modern technology is wonderful when it works but when it goes wrong it can be a real problem and not one that we can solve ourselves so I do sometimes think longingly of a life lived off-grid when heating was a fire which I could deal with myself and there was nothing to go wrong the only problem being having the money to afford to buy coal or other fuel though even then a walk in the countryside usually entailed collecting bits of wood and fallen branches to burn.

Luckily my cold is better and the grey blanket has lifted again so that I can see the funny side of life once more!  Thanks for all your good wishes.
Posted by Marigold Jam at 10:20